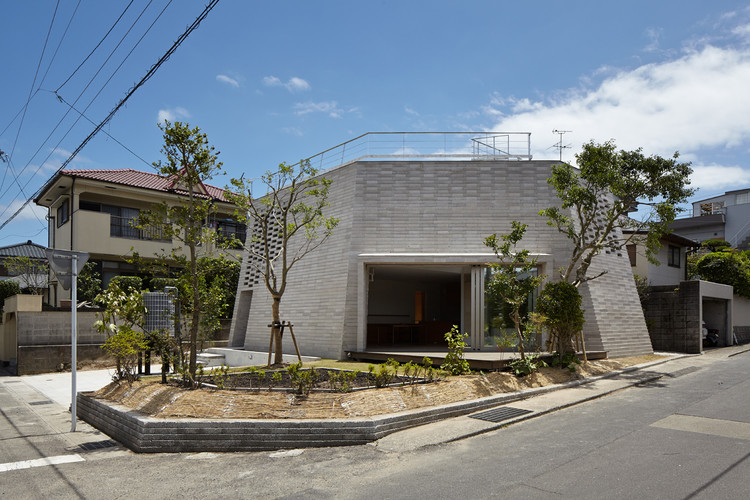 Text description provided by the architects. The resident did not rely on energy in South Kyushu of high temperature and humidity, and hoped for ecology life with the environment.

The wind of land is felt, rain water is saved, and it enjoys gardening. It is native life. The site is a residential quarter that extends on a Shirasu plateau near from the Kagoshima City downtown. I then thought native house(eco-house) with the soil (Shirasu) as the material that formed this plateau native by the made Shirasu block.

Shirasu has a lot of characteristics in other geological features like fireproof, adiabaticity, the humidity conditioning, thermal storage, and lightness, etc. without. Pressurizing and construction it the technology of a monotonous block in Shirasu for the pavement that had begun to spread in the city was made the best use of, and production with the block for the construction of Shirasu was tried for the first time. To secure material strength, the outside wall block changed mixing Cirrus. It inlaid with the raw ore of Cirrus to improve the adsorption and desorption of moisture to the inner wall block. At the same time, The character of this Shirasu appears as an expression of the memory accumulating to the block. The house where in all outer had been piled up on an inside and outside midair layer double wall became a space wrapped in the soil like the cave in Cirrus.

This inside and outside midair layer double wall has reduced the thermal loading to the inside. In addition, the inner wall block surrounds like finish in any room of the house, and adjusts the indoor humidity. Therefore, the inside is chilly cool, and warm summer in winter. It is a steady throughout the year thermal environment. It proposed the energy performance of underground resources accumulated in the Shirasu plateau and it proposed the space with a new environmental circulation type to the Shirasu block by reproducing.