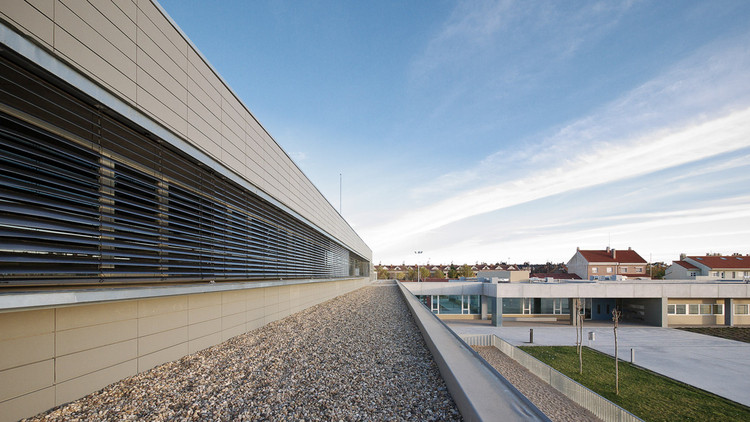 Text description provided by the architects. The plot takes an intermediate position between the old 'Cañada de Puente Duero', with houses of detached topology in row and the new Partial Plan 'El Peral' in Valladolid.

Regarding the character of the area, a mixture of rural environment with urbanization peripheral, the studio tried to implement the proposal in a friendly manner with both, the environment it's in and the scale of the surrounding buildings. For this reason the building is configured abroad as a large horizontal plane below which moves, with a well‐defined volumetry, the different pieces that make up the project, and above which appear certain representative elements. Dining room, multi‐purpose room and gym have therefore a greater height inside. The structure of these specific spaces is made out of large concrete beams which, together with the skylights, bring a larger scale to these rooms.

Given that the building spreads itself horizontally, it was decided that those volumes lower than the horizontal plane were of ceramic material, in different colors depending on the assigned use. In this way, the difference between the multiple pieces that correspond to each use in a building of this type is formally materialized.

The top perimeter of the cover that absorbs the thickness of the large horizontal plane is resolved with pre‐cast concrete pieces, painted afterwards.

On top of this plane are placed, as if they were small boxes, the skylights of the dining room and the gym and one piece housing 4 classrooms. This volume consists of a homogeneous facade of ceramic pieces, so that the colors and textures are uniform and harmonious in the whole building.

The building programme is organized in an extensive ground floor and a pill with four classrooms on the first floor.

Downstairs, three areas are clearly differentiated: classrooms, services and a gym. As filters between the three zones are placed the access lobby and the lobby of output to the playgrounds and gym access. Classrooms are arranged lengthwise along two aisles illuminated by patios, amongst them are placed the toilets and two classrooms for small groups. On the South front of the building appears a cantilever that prevents direct sunlight entry and serves as a large porch attached to the children's play areas.

Throughout the design process the perception of the different users of the school was taken into account , so in the lower level there are pieces of furniture (such as the small concrete bench at the entrance), visual connections, changes in the treatment of color and texture, etc. 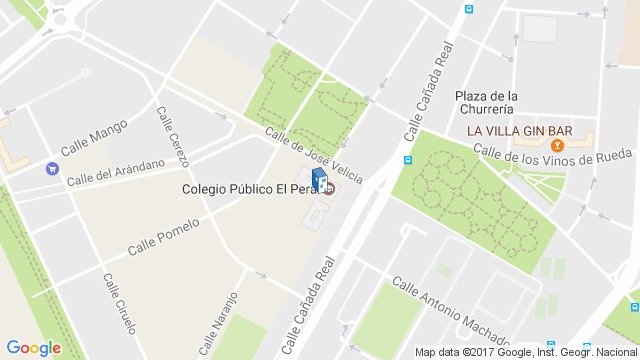