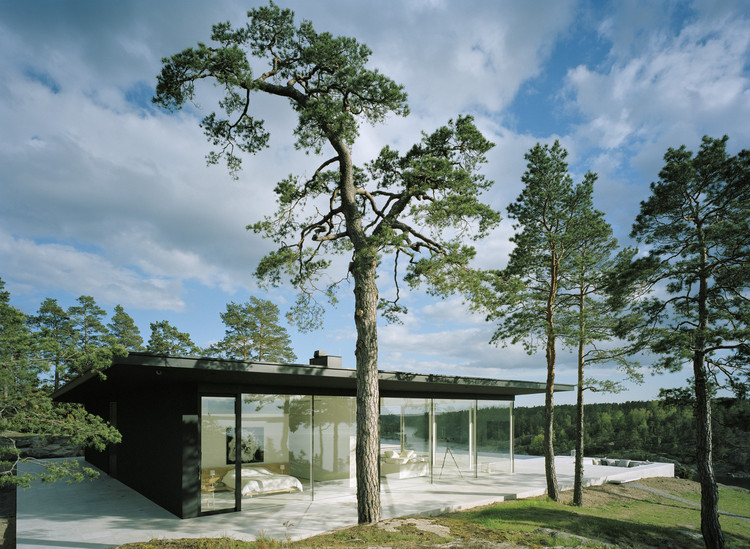 Text description provided by the architects. Situated on a natural plateau atop a rocky headland, the house enjoys panoramic views across the bay and the evening sun to the west. The Gotland limestone on con¬crete foundation is crafted like a massive plinth, building walkways along three of the house’s façades under the roof’s deep overhangs. On the side facing the sea, the limestone-covered foundation opens out into a large terrace with a sunken swimming pool and recessed sitting area providing shelter from the wind. The same limestone-covered foundation forms the connected floor space throughout the house.

The entrance side of the house features a solid façade wall, plastered and decolored to matte black. The only interruption is a ceiling-high pivot door with a thin lattice of black stained oak filtering the light. The other façades are made up of a structural glazing system of full glass walls. The insulated glass consists of an outer layer of Optiwhite glass, reducing daylight discoloration, and an inner layer of thermal control glass to avoid condensa¬tion and downdraft. The bottom of the glass frame is completely recessed and hidden between limestone slabs, making the boundary between outside and in¬side practically non-existent. A hidden moat around the house, constructed of stainless steel with a limestone cover, channels rain and snow water away.

The floor plan of the house, a simple rectangular shape, is clearly divided into private and social spheres. The pri¬vate sphere is further divided into bedrooms, bathrooms and storage, built around an open-concept living space. Instead of traditional doors, most openings are ceiling height. Simply turning the corner gives you the impres¬sion of entering a new room. The formative idea behind the house was to create a clear and concentrated form in marked contrast to the surrounding landscape. The presence of a concrete ob¬ject, abstract for the location, also heightens the experi¬ence of the rich shades of nature.

While an agreement on the basic idea was reached quickly, finalizing requirements regarding quality, preci¬sion and attention to detail was an extensive project. Behind the clean lines hides a series of advanced tech¬nological systems. Tap water is extracted from the sea and treated in a desalination unit. Heating for the floors, outdoor pool and hot water is produced by a geothermal heat pump. District cooling, so-called free air-condi¬tioning, is also pumped into the house through the rock shaft, which means that all air-conditioning is basically free of charge. All systems are operated by a smart con¬trol and monitoring solution, using a web-based inter¬face, controlled via the internet or a mobile handset. 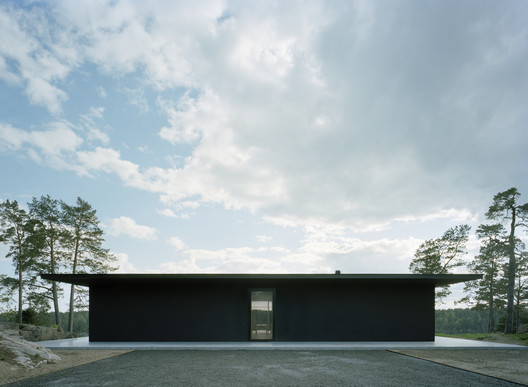