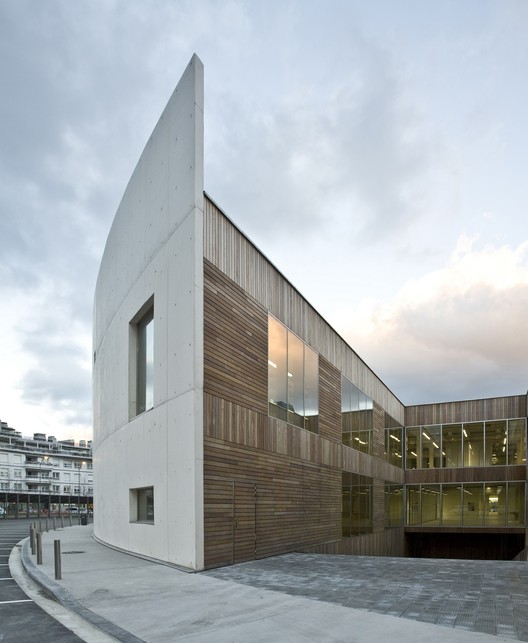 The Carlos Santamaría Center, in San Sebastian, is a university facility for an advanced documentation center and library, related to the University Campus in Ibaeta, the result of a public competition held by the University of the Basque Country (UPV-EHU).

The building is configured from a spontaneous trace following the natural curvature of the plot. This trace is interrupted by an inflection point, an elevated vertex inviting the entrance to a protected space, covered and exterior, a prelude to the main lobby. This vertex is oriented to the east where the roundabout that links Tolosa Avenue, an urban landmark, is located.

The curved envelope is divided into two blocks separated by a street running through the building from north to south. This large slit bathes the building in natural light, and allows for the creation of an interior private garden as an extension of the spaces overlooking it. It is a quiet space, accessible for walking, reading and group meetings, always lit from the south and north, an outdoor counterpoint to the urban noise inside the building.

The position of the openings on the facade is determined from the inside, they are always located at the end of the communication axes, their proportion is designed on the facade to attain a satisfactory composition. Occasionally, one of these openings is an overhang, these are extensions of the interior space in strategic locations, equipped with light and benches, intended for reading and relaxing.

The building consists of a basement, ground floor and first floor, it is pedestrian-friendly, and it is below the height of surrounding buildings.

The program is organized, according to different uses, in the two blocks that make up the building, emphasizing clarity of circulation and autonomy of uses. The first block, in front of the access, houses the reception area, internal work areas, classrooms, exhibition hall and auditorium on the ground floor. On the upper level are the institutes and classrooms. The second block contains the library with reading rooms, computer and media resources. The basement floor is for parking and also contains the compact storage area.

The main facade is a curved envelope of self-compacting white concrete 25cm thick, conceived and built as a separate skin. Structurally self-supporting, it is separate from the rest of the structure of the building. Thanks to its structural independence, the wall (skin) has been constructed without expansion joints, including access sections with cantilevered areas above 40 meters.

Inside, the concrete wall allows the passage of thermal insulation along its full height, avoiding thermal bridges. It is finally clad with plasterboard.

On the street that divides the building, both the flooring and the facades are made of wood. Outside, IPE wood slats alternate opaque areas with glass openings. The wooden slats are arranged both vertically and horizontally, fixed on waterproof pine battens, which in turn are attached to an OSB panel with exterior waterproofing. The substructure of this enclosure is formed by a series of vertical and horizontal pieces of laminated wood, with rock wool insulation between them. At the ends of this street and on the main facade, the facade is designed with self-supporting curtain walls with a plywood structure.

There are no pavements inside, flooring finishes are designed with polished concrete, with a balance between the slipperiness allowed and the desired brightness, leaving the concrete aggregate exposed. Outside the flooring is made of wood, an IPE deck treated for outdoors on waterproof pine battens.

Inside the building, Eucalyptus plywood is important. Used as interior lining in the wood facades, it is also used in the design of counters, furniture, siding of skylights, lockers or cladding in the walls of the auditorium.

The main characteristic is the curved shape of the envelope. With this curvature, direct exposure of the facades is prevented, thereby reducing heat loss through them. The self-compacting concrete, on the other hand, implies a more simple use of concrete and reduced energy expenditure. The white color reflects light, preventing overheating and thus, consumption for cooling.

Moreover, the main lobby is conceived as a large greenhouse. The exterior facade is made of single glazed windows, and the insulation is on the interior facade, so the lobby is an unheated space with glass roof and facade. In winter, this space accumulates solar energy to distribute to the rest of the building. This allows the production of natural energy gains, reducing heating consumption. In summer, the openings arranged at the top of the curtain wall and the operable doors at the ends of the lobby are outlets of hot air, cooling the space.