It’s been two year’s since the construction of the 42-story Museum Tower in Dallas. As many of you may recall, the luxury condo has been in dispute with the neighboring Nasher Sculpture Center over an intense “hot spot” caused by the tower’s highly reflective skin. Although Nasher has demanded that the Museum Tower cover its southwestern facade with an external louver system, thus blocking the glare from penetrating Nasher’s Renzo Piano-designed cast aluminum sunscreen, the developers have refused to oblige due to a fear of jeopardizing the project's profitability.

Negotiations have turned to squabbles and proposals have fallen on deaf ears. However, a team lead by REX and Front has been commissioned by the Dallas Police and Fire Pension Fund (DPFPF) - the Museum Tower’s developer - to explore a "third option," one that would not require changing the construction of either Museum Tower or the Nasher.

Surya, the 400-foot, sun-responsive concept design proposed by REX and Front, aims to shield Nasher from the Museum Tower’s intense glare while providing a identifying symbol for the Dallas Arts District. By carefully tracking the daily reflections caused by the Museum Tower, Surya would serve as an ever-changing sculpture that generates a unique composition of "blossoms."

To determine the intervention's extents, the reflections from Museum Tower were mapped at each time of day for every day of the year onto a vertical plane running down the center of Olive Street, the road separating Museum Tower and the Nasher. This analysis circumscribed the silhouette required to block all reflections, a shape roughly 343 feet tall by 168 feet wide and elevated 57 feet above grade.

Building a static blind of this dimension would block the commanding views from the multi-million dollar apartments on Museum Tower’s southwestern face, rendering them largely worthless. Hence, the shade is pixelized into variably dimensioned umbrellas that "blossom" in the precise constellation needed at any given moment of the day, and retract when not.

A perimeter ring is constructed to hold the umbrellas in place. To reduce its size, weight, and cost and to provide an armature on which to fix the umbrellas’ stems, the ring is transformed into a bicycle-wheel structure.

Supporting the intervention directly from below is unfeasible, as it runs down Olive Street’s right-of-way that houses significant city infrastructure. Supporting it from either side of the street would block all sidewalk access. Hence, it is supported at its hub by a tripod reaching from a parking lot adjacent to Museum Tower.

The result is a 400-foot tall, dynamic, sunlight-responsive sculpture which blocks glare from Museum Tower onto the Nasher and which equally serves as an identifying symbol for the Dallas Arts District. Each moment of day, every day of the year, the sculpture generates a unique composition of "blossoms." 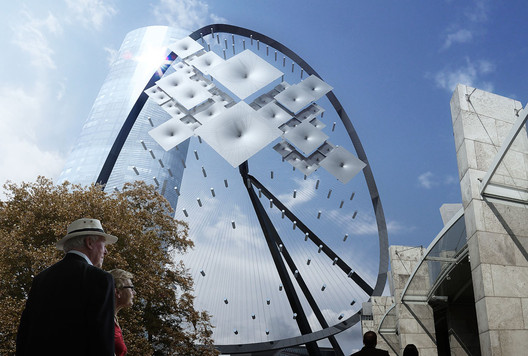