✕
Save
Museum of the Built Environment / FXFOWLE
Share
Or
Copy

The design principles of MOBE are bound with the planning of KAFD as a whole. A sunken wadi - a dry desert riverbed that becomes wet during heavy rains - runs through the development, bisecting the museum’s site, a large plaza. Central to the inhabitation of the desert, a wadi allows limited agriculture in a severe environment. At KAFD, the wadi has been transformed into a linear pedestrian park that connects key buildings: Madâin Sâlih and At-Turaif, two Saudi Arabian UNESCO World Heritage sites that inspired FXFOWLE’s design. The juxtaposition of worked stone and natural rock, formed by erosion and other geologic processes, is echoed in a dynamic carved volume that nestles around the artificial topography of the wadi.

The program draws the public into the building, activating the space at all times. Along with permanent and temporary exhibition galleries are a restaurant, bookstores, research and education center, auditorium, public spaces including atrium, administration and support spaces, monorail, and parking. Three district-wide circulation systems are integrated into the fabric of the building: the building connects to KAFD via the monorail (two levels above ground), a skywalk (one level above ground), and the wadi (one level below ground). The MOBE station on the monorail offers direct views into the galleries, and the adjacency of the wadi creates visual porosity and emphasizes synergies between interior and exterior.

The complex program requires divisions between public and private spaces; secured and unsecured spaces; and spaces that have traditional admission hours and those that are open twenty-four hours a day. Blurred boundaries between private and public, internal and external, promote a setting that is welcoming to museum-goers and others. The internal distribution of the program is expressed by solidity and opacity on the museum’s upper floors and transparency on the lower levels.

The facade of the upper portion consists of laminated glass panels that create a textural quality and allow daylight into select locations. This strategy borrows from At-Turaif, the first capital of the Saudi dynasty. An oasis city dating from the fifteenth century, the citadel incorporates climatic responses—adobe construction, small triangular apertures—into its expressive architecture. At MOBE, the apertures recall those of At-Turaif in both visual presentation and function, but in a contemporary manner. The facade, likewise, adopts the role of its ancient counterpart—minimizing heat gain—but with an up-to-date reflective system. The outer wall of laminated glass covers an inner insulated, weather-tight envelope.

The interior circulation is clear despite the intricate arrangement of program elements. Visual cues draw visitors into the site and through the building. A large interior atrium, publicly accessible and open around the clock, connects to parking, monorail, and skywalk. Half interior and half exterior, the atrium marks a bridge over the wadi; it also links levels within the museum. Museum administration and support are located at grade and a level above. The exhibition areas and restaurant are on the upper floors, encouraging visitors to tour the entire building. Elevators manage vertical movement between museum spaces; horizontal circulation is organized by virtue of proximities between similar program components. Staircases traverse the interior of the museum, providing access to the lobby, exhibition spaces, and transportation. The elliptical auditorium, wrapped in rapidly renewable woods, floats independently in the atrium. 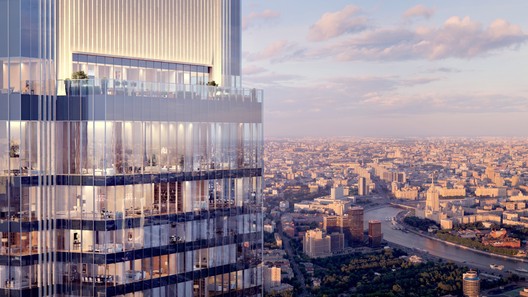