Save
A Walking City for the 21st Century
Share
Or
Copy

In a world where people live more mobile lifestyles than they have for centuries, cities are facing a problem they rarely planned for: their citizens move away. When jobs and resources start to decline, modern cities, such as Detroit, suffer difficult and often wasteful processes of urban contraction. In contrast to this, Manuel Dominguez's "Very Large Structure," the result of his thesis project at ETSA Madrid, proposes a nomadic city that can move on caterpillar tracks to locations where work and resources are abundant.

Of course this is not the first time that the idea of a nomadic city has been proposed. Ron Herron's Walking City is one of the more recognizable Archigram designs from the 1960s, and has been influential to architectural theory ever since. However, the design for the "Very Large Structure" expands on the Walking City by including strong proposals for energy generation on board the city.

Read on to see more on this provocative project - including a full set of presentation boards in the image gallery. 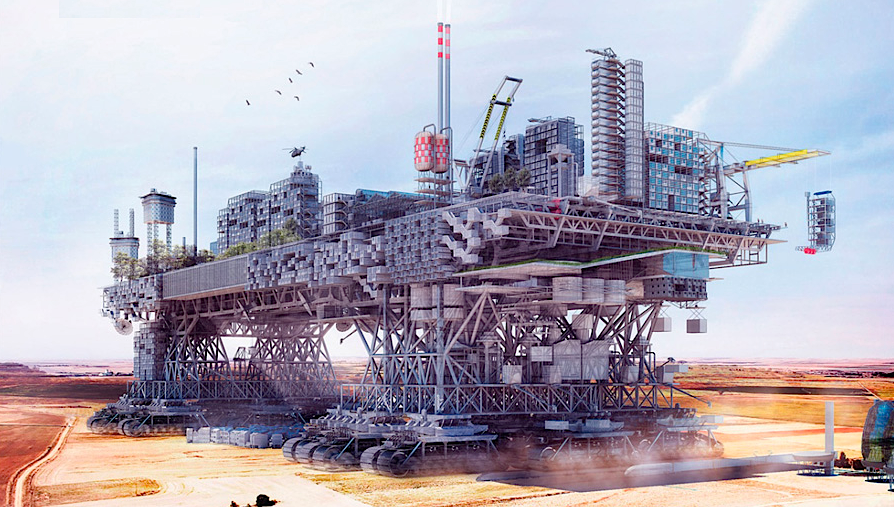 Dominguez admits that the impulse to design the "Very Large Structure" came from his desire to stand out from his peers: "knowing that all final thesis are 'Utopical', I decided to do a self-consciously utopical one, utopic for real."

However, Dominguez also felt it was important that his design be theoretically feasible, which is why he looked to the world of heavy engineering to inspire the structure's colossal steel frame and caterpillar tracks. With all these additions, Dominguez's design seems less of a fantasy than Herron's giant shell on stilts.

Moreover, the Very Large Structure, despite its enormous size, has much less of an impact on its surrounding ecosystem. Its mobility is proposed as a way to encourage reforestation of the static cities which it replaces, and part of its day-to-day function is the management of this environment. The specific social conditions of the Spanish territory it is designed for also add to its relevance: it provides work for the high number of unemployed citizens in Spain.

Although almost 50 years have passed since a moving city was first proposed, when one considers how many western cities are currently experiencing devastating slowdowns, both economically and in terms of their population, Manuel Dominguez's intriguing, fantastical proposal begins to seem far less absurd - and far more relevant - than it may at first seem.