Save
Central Mosque of Prishtina / SADAR + VUGA
Share
Or
Copy

The competition isn't over yet as the jury for the Central Mosque of Pristina Competition has announced two second place prizes and no winner. Organized by the Islamic Community of Kosovo, the competition seeks to create a place "where understanding, humanity, tolerance, respect and sincere love shall be cultivated." Slovenian firm SADAR+VUGA was one of the two teams awarded second prize with their project 21PR22. Follow us after the break to learn more. 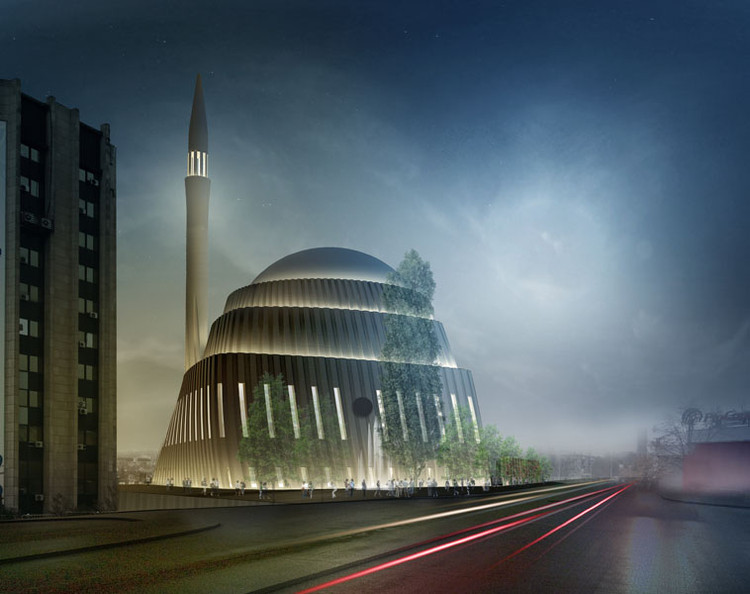 The proposal is related to the architectural significance of the old Sultan Mehmet II Mosque in Pristina, which was a design ‘prototype’. Main architectural characteristics as well as the impressive proportions of the old Mosque, was studied and interpreted into a new fresh dynamic, yet balanced development of the mosque’s volume and massing in its surroundings.

At the old Sultan Mehmet II Mosque, an octagonal belt transits the square of the rectangular volume to the circle of the dome at the top, whereas the volumetric transition of the new mosque is much smoother: the rectangular base volume, a lower belt, narrows towards its top and slightly rotates to accommodate a middle belt. The narrowing and rotation of the middle belt continues to the upper belt and further up to the dome. The minaret rises up from the corner, to the right of the entrance.

Three slightly rotated massive belts and a circular dome make up the mosque. There is spacing between the belts, as well as between the dome and the upper belt allowing diffuse daylight to flood into the interior of the dome. It seems as if the three belts and the dome would be suspended by the warm daylight, which creates a very specific atmosphere inside the Mosque.

The interior is filled with a homogenous light, penetrating into the space from spacing between the belts and through the windows of the lower belt. Light spills in from above, from all sides, from the floor to the base of the dome. Two sets of narrow windows on the lower belt allows sunrays to penetrate the mosque. The lower set of windows touches the ground floor of the Mosque and enables viewing towards outside.

The Mosque rises above an 8m high podium, which, due to the height difference of the terrain, is partly buried. The podium contains two levels of rooms for the ancillary activities of the mosque: ablution, social and education center, and administration offices with the imam’s apartment on the upper level and a big conference hall surrounded by bazaar-like organized shopping on the lower level.

The grand portico consisting of an artificial stone-cladded colonnade in front of the main entrance to the mosque is developed as an extension of the mosque’s lower belt. The cannelure-shaped colonnade creates an in-between space between the ‘carved-in’ entrance and the gathering plaza on the entrance plateau.

The screens continue from the podium’s lower level along the podium wall on the northern side and rises up to the entrance plateau. Here the screens embrace the entrance garden that appears due to the Kiblah’s orientation of 38 degrees in relation to the urban context and the surrounding buildings. The lower part of the podium extends on the same level to the big lawn – a large square green area, lifted from the surroundings. This is a main gathering place for prayers, citizens and visitors. This is the place to relax and play, to contemplate or to celebrate.

From here, the Mosque appears in all its own grandeur.