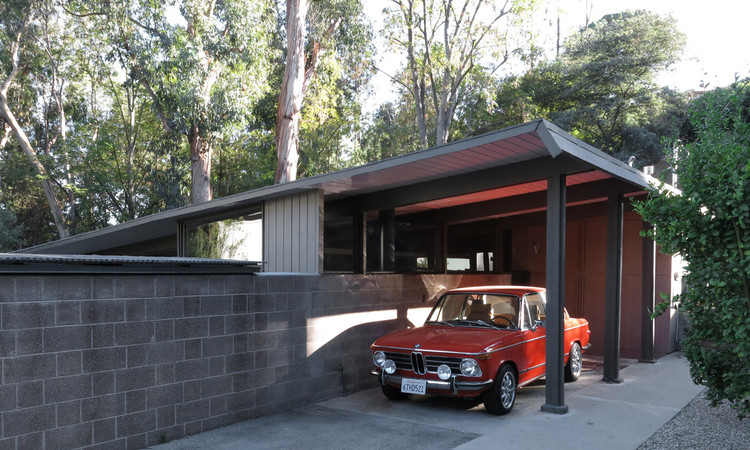 Text description provided by the architects. Commissioned in 1949 and owned by the original family for 60 years, the Gelb House was one of the least modified in A. Quincy Jones’ Mutual Housing Association, an ambitious experiment in Los Angeles post-war housing. Each architectural element and detail was designed and executed with extraordinary economy and elegance. The post-and-beam frame is laterally reinforced with judiciously placed redwood-cladshear walls and exposed concrete block elements. Exterior window and door jambs are integrated into the structure, without a redundant move anywhere. Principal materials consist of concrete, concrete block, redwood cladding, and douglas fir posts, beams and plywood.

Our rehabilitation philosophy has been one of a light hand. We began by sketching and understanding each joint before any design work commenced. Early on, it was decided that nothing of the post-and-beam frame or of the shell would be altered. Instead, we coaxed the house back to vigor by updating systems, rehabilitating finishes where possible or replacing them with similar materials when necessary. Bathrooms and kitchen have been replaced in entirety, using components and materials sympathetic to the original simple palette, although no walls, doors or windows were moved.

Our first aim was to respect the original house and to maintain its spirit. However, when we have made interventions, our goal was to express them—quietly—as independent from the 1949 fabric. Kitchen cabinetry is oiled steel and appears almost black; lighting fixtures hang on cables and provide indirect light. The landscape strategy moved away from the original semi-tropical concept, probably typical of its time, to a no-water, mostly native and dry-climate landscape. Each design decision has been made deliberately and with the understanding it could be reversed in the future when, no doubt, a different attitude toward preservation and rehabilitation will predominate. 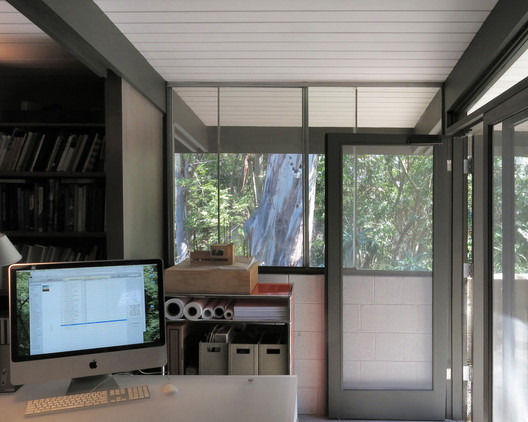