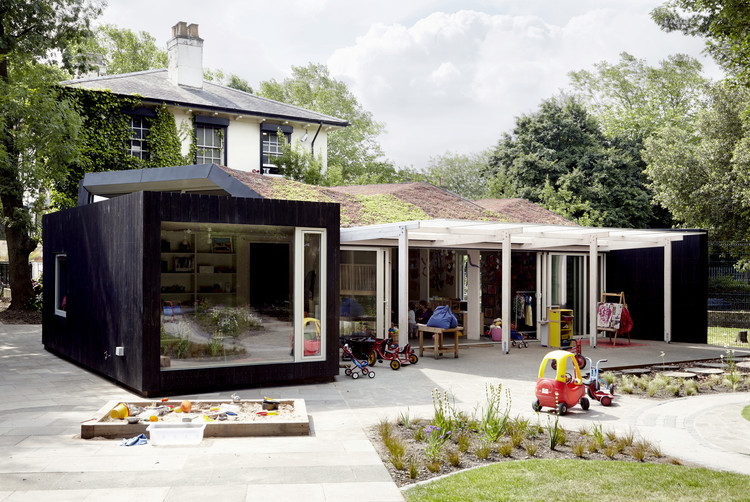 Text description provided by the architects. The nursery had been operating from a dilapidated and unsafe portakabin with a lifespan of only 15 years, originally built in 1983. AY Architects initiated a proposal for its demolition and replacement with a new building in an effort to secure affordable childcare and a sustainable building for the community for the long term. They worked closely with the neighborhood in their multiple roles as local architects, former parents, trustees and voluntary members of the nursery’s management team. In January 2009 they coordinated a successful application for a Capital Grant which would cover the project’s costs and persuaded London Borough Camden to give full support to their initiative.

The brief was for a larger and environmental friendly facility that could provide an increase from 18 to 24 nursery places. The footprint increased from 90 to 130m2.

The design of the new building takes its inspiration from the unique setting within the public gardens. It is planned around a large flexible playspace that generously opens out to the external green space distinguished by a concentration of mature trees. Indoor-outdoor play is central to the design concept and the garden environment is considered central to the children's learning experience.

The superstructure is made up of cross laminated timber panels with an exposed internal white wash finish. The exterior of the building is clad with ebony stained fsc siberian larch decking to give the building a robust skin. The dark exterior allows the building to sit contently within the park and amongst the trees trunks.

A series of glue laminated timber columns echoes the verticality of the surrounding trees while the roof is designed to maximise daylight and allow natural ventilation. Three strip windows with north-south orientation span the plan diagonally. The orientation of the openings welcomes the sun to enter the building when it is low to take advantage of solar gain in colder months, while large overhangs block out the sun when it is hot to prevent overheating. The larger north facing roof window brings in an abundance of daylight and facilitates cross ventilation.

The south wall of the main playspace includes a large window and shutter looking directly onto the public gardens, and also offers a slender low bench to be used by the neighbours. In this way the nursery gains a greater level of interaction with the community, contributing to a safer and more enjoyable green space.

The nursery is designed as an energy efficient building in operation and low carbon in construction. A mixed sedum blanket forms the roof finish, contributing to local biodiversity and water retention. 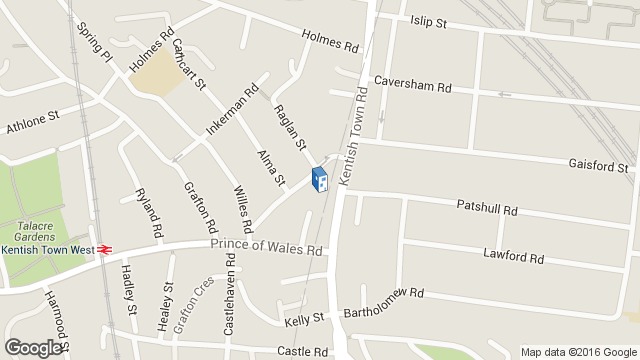 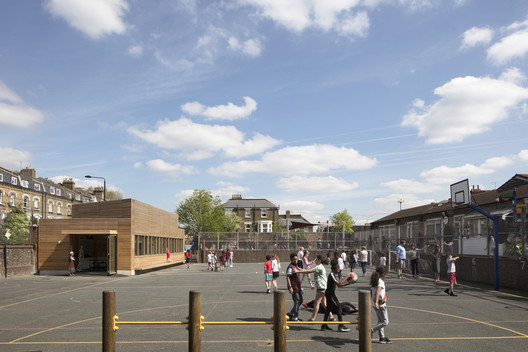