In 2003, BOLLES + WILSON won a national competition that gained them commission of the new Luxemburg National Library (BnL Bibliothèque Nationale de Luxembourg). After years of hibernation, the 39,000 square meter library will break ground in 2014.

Follow us after the break for more analysis on the library...

From the boulevard, the library's front facade caves in, funneling visitors inside its interior chamber. Columns, resembling leafless winter trees, rise to uphold a punctured plenum employing roof scoops to shower the spaces below with natural sunlight. The ground level unfolds, ascending to form reading terraces affording readers varying levels of retreat and book selections. Nearing the top, terraces plateau to host more private programs such as a consultation deck, valuable archives and artifacts, and core services. The top-most level adjoins a small forest of trees directly behind the library, culminating in an oasis-like garden for leisurely reading and casual meetings.

Rather than relying on excessive coats of thermal insulation, the building implements low-tech natural ventilation and night purging methods to allow the books to properly breath sans mechanical air. Bunker-thick walls ensure historical documents and publications are protected against hostile forces and temperatures. Windows, nonetheless, are dispersed melodically upon the shell of the building, inviting selected views from the outside in.

Refusing to "blingisize" renderings, BOLLES + WILSON has preferred to explore their design through the testing of wood models, continually adjusted in their in-house workshop. Their commitment to time-honored, low-tech methods may be indicative of their belief in libraries as the birth places of ideas via the primitive delivery rooms of history. 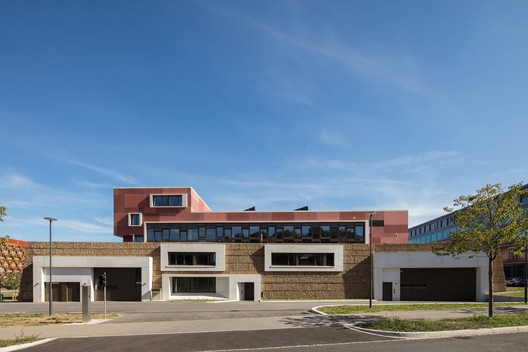