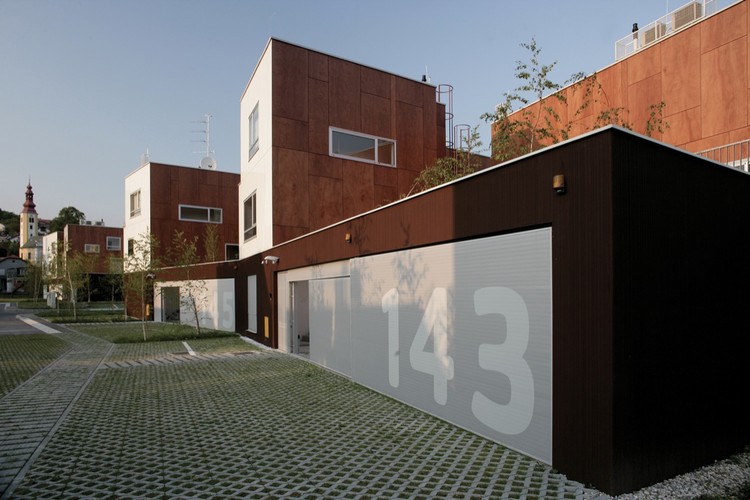 Text description provided by the architects. Another attempt to interpret the urban rules in order to avoid "the urban villa" syndrome. In a peaceful scenery of the former village of Markusevec which grew over the years to become a part of the city, the Russian client asked for a middle-class residential settlement. The general urban layout respects the rooted paths leading to the center of the village. The housing units are accumulated along these lines. A public playground is set as the terminal point on the other end of the route.

Taking the rural scale as a point of departure, the typology of semi-detached houses has been recombined into a series of compact rural mats - flat, introverted, and dense. Lots are not regular but tailored to meet the area of 600 sqm minimum. The setbacks of the second floor are generated by the rule for the maximum attic area that limits the surface to the 75% of the typical floor. By avoiding to have such a typical floor, an arithmetical average of the two lower floors could be taken. By the virtue of this manipulation a bigger amount of square meters could be achieved. Subsequently, the setbacks differ from house to house and directly reflect the mathematics, rather than design. Carports, patios, terraces and dwellings are all contained within the clearly outlined limits. An effort to maintain the qualities of individual housing in the group - more congested and less land-consuming.

The unifying ground level acts as a pediment for the units comprising one or two apartments, eight of them per mat. The upper parts are clad in timber towards the inside, offering a user-friendly environment. The outer sides are clad in aluminium as a protection from weathering. According to the topography, the mats facing the main road are set on the ground, while the other two, facing the stream, are lowered for one floor. The very fact that the mats could be manipulated up and down gives a hint about their generic qualities.

The terraces were supposed to be equipped with prefab barbecues - a custom design by the office, as an effort to create a specific sub-urban/post-rural lifestyle, but was finally rejected by the client who failed to see their crucial strategic importance. 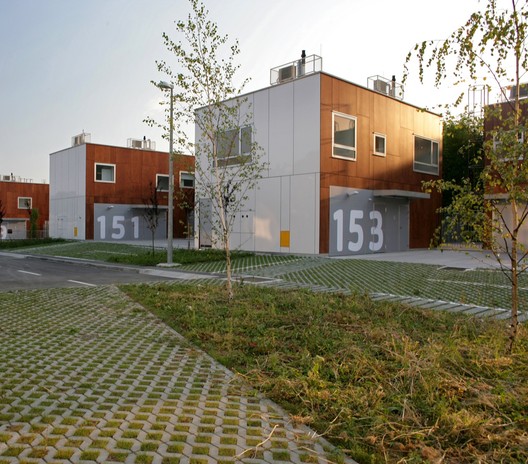 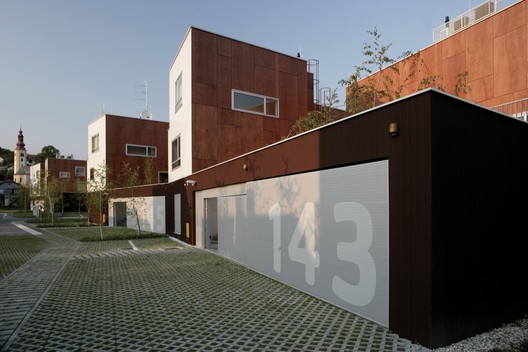