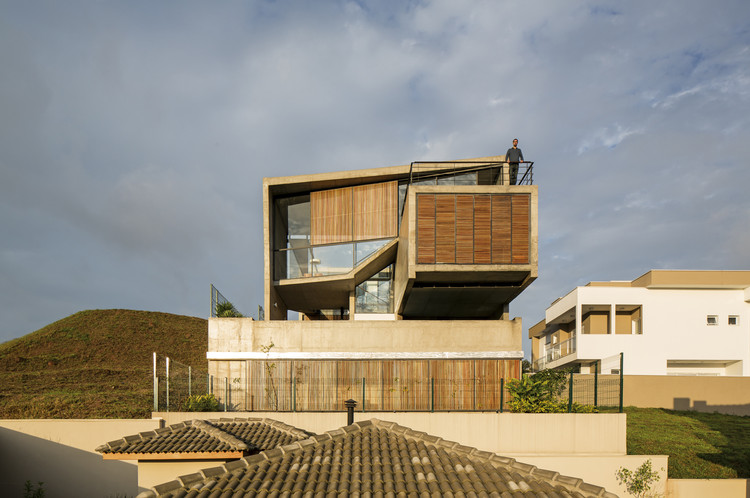 Text description provided by the architects. Designed to be implemented in a lot of a condominium in the city of Santana do Parnaiba, it was possible to develop the design of this house with the contribution of its future resident, quite unusual in these situations, who agreed with a house to establish a more frank relation with the street.

Two porticos parallel to each other are cut by a rectangular volume that is implanted in the longitudinal direction to the plot. This disposition configures new situations of permanence in a land of ​​steep downhill.

The longitudinal volume, which actually houses the whole intimate area and services - bedrooms, TV room and laundry - is leveled off with the garage and has its circulation toward the courtyard giving access to the leisure area, swimming pool and sauna. Its cover slab determines the level of the living room and extends, on a level with the promenade, literally forming an internal street.

Now the porticos which are perpendicular to the volume of the rooms, house the rest of the program; at the front, the portico marks the entry as a shelter for those arriving from the promenade, and also contains the kitchen. In this situation we have developed a system of brise soleil, which will be built in wood and will have, besides the function of protection against solar radiation, the role of preserving, when necessary, the daily life of the house.

In the second portico, on the other end of the prism and at the bottom of the lot, is the rest of the program, living room and dining room, connected to the kitchen by a suspended walkway closed by glass.

The gap between the living room and kitchen forms a suspended patio, facing the main view of the condominium; a large area of natural preservation framing the landscape.