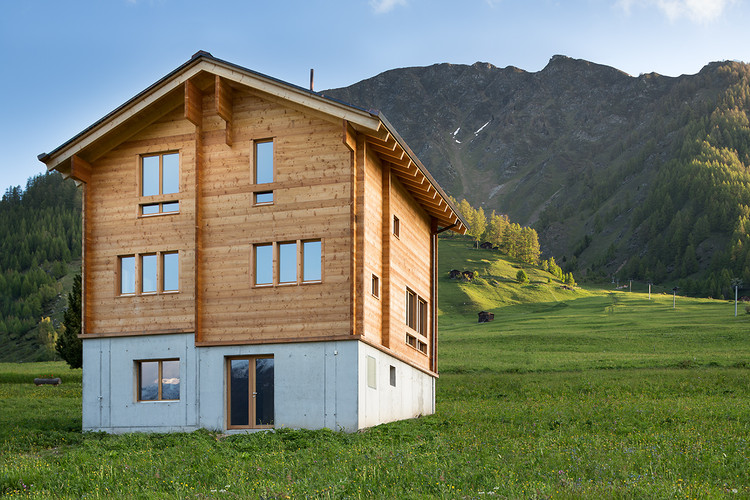 Text description provided by the architects. INITIAL SITUATION_Münster - a small town in the Valais canton, surrounded by an impressive mountain panorama and characterized by centuries-old wooden log houses. New buildings stand out with their atypical proportions, huge balconies, attached garages and fake corner joints. They don’t comply with the tradition of the truthfully constructed wooden buildings. Due to this insensitive approach and the missing willingness to apply the traditional craftsmanship, they seem misplaced within the generic historical cluster of the village.

PROJECT SITE_The building is located at the edge of the village Münster. The ground floor is made of concrete and works as a base that carries the two-story wooden construction. Featuring split-levels, the building makes use of the sloping terrain while earth movements can be reduced to an absolute minimum. Surrounded by the typical local meadows, a narrow cobblestone path leads from the road to the western entrance, the southwest-facing patio and the southern entrance. During the winter months, one can step straight on the adjacent ski slope from here.

MATERIAL_ The character of the log building method is determined by structure and materiality. The log structure itself is made of larch wood. It is more noble and resistant than spruce wood. Larch wood is also used for the windows and most of the built-ins. The log walls penetrating the inside of the building are visible at all times. The internally insulated outer walls are clad and covered with Pushkin green loam rendering. A shadow gap along the upper edge of the plastered surfaces clearly reveals their non-structural character.

SPATIAL CONCEPT_ When using the log building method, the inside of a building automatically becomes a cluster of chambers. Scaling them horizontally according to their function generates two main rooms and two ancillary rooms instead of four equally sized rooms. The smaller ancillary rooms absorb both entrance areas, the stairwell, the kitchen and the bathroom. Different ceiling heights create a vertical differentiation of the rooms that can be perceived throughout the entire building and is reminiscent of Loos’ Raumplan. This spatial interplay also clearly shows in the facades of the building. The southern entrance leads into the ground floor which consists of guest room, guest bath and technical room. The western entrance is located at an intermediate landing. A short stair is leading to the spacious dining room featuring a high-ceilinged kitchen. The raised living area can be reached by climbing two more steps. The same difference in level can be found on the third floor between the two bedrooms and the shared bath room.

SUSTAINABILITY_Thanks to the extraction of thermal heat from the ground, no fossil energy is used for heat production. The renewable construction material wood reduces the amount of grey energy and thus decisively minimizes the ecological footprint of the building. In addition to that, returning to the log building method preserves, revives and promotes a traditional local craftsmanship.