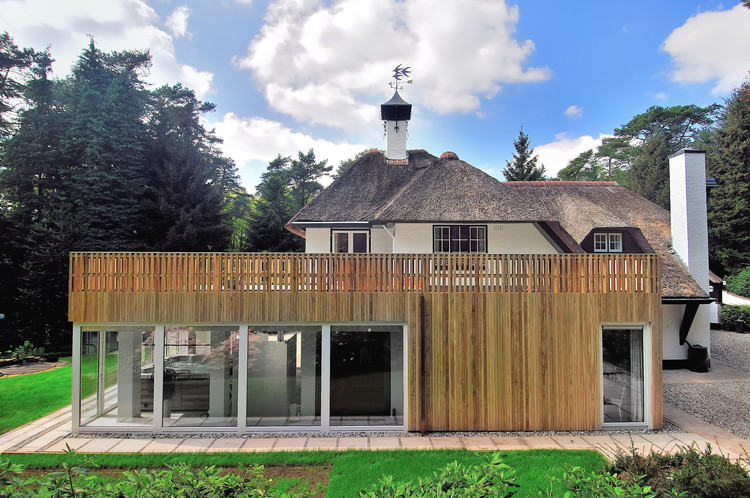 The house with the two faces

In the middle of the forests in the heart of The Netherlands is an extraordinary residence. The residence was recently renovated with the focus on sustainability done by the architects Bob Ronday and Maxim Winkelaar. The residence is built in the early 20th century and the house is characterized in an English cottage style with white painted walls and a thatched roof. On the plot is also a double garage in the style of the house and all is surrounded by a large, beautifully landscaped garden. The house has received over the past one hundred years several different renovations.

The most rigorous conversion is done in the 1970s and the character of the house changed by the addition of an oversized constructed porch. The client wanted a house that is both livable and sustainable. One of the requirements was that all living areas are located on the ground floor. So, that in the near future, the house will become easily accessible when they get older. The design was carefully mapped out so that parts of the house could be reused, so nothing is carelessly removed out of the building. Besides a thorough renovation of the house the existing porch received a new façade and with a new extension.

The finishing and detailing of the existing porch was very dated, but the location and orientation in relation to the other living areas, was very useable. We used this space for the main bedroom with en suite bathroom and a spa / wellness. The façade of the new extension is clad in an Accoya ® wood, a sustainable new product which is thoroughly modified and holds 50 years or longer. Accoya ® is proclaimed to a Cradle to cradle material. Because of its location in the forest rondaywinkelaar placed the Accoya® vertically, so the extension integrates with the surrounding. The wooden facade plays together with the thatched roof. The Accoya ® lath has a mutual distance of 1 inch. This is deliberately done to make the whole less massive. The parapet of the roof is semi-transparent so that part of the house is still visible.

A detailed layer on the top of the cladding is the seal of the verticality and makes the whole extension to a subtle box. The porch is partially oriented on the southwest and rondaywinkelaar made folding glass walls. These can be fully opened and increases the inside-outside relationship. Besides recycling of existing material in the house, there is chosen for a home of sustainable energy solutions. In the entire house is a new tile floor with an under floor with a heating system. In the basement is a heat pump placed, the pipes of the system go deep in the ground (approx. 160 meters). The geothermal heat pump uses to heat the home. Together with the under floor heating this makes great energy savings. Besides the heat, the client has chosen for solar energy.

The roof of the extension was the perfect location to place the solar energy panels. Besides the choices for the façade and sustainable energy supplies rondaywinkelaar also considered good reuse of existing elements in the house. The kitchen is covered with a new coat of paint and modern appliances, so it received a modern touch and is in a perfect functional condition. The front of the house is fully remained in traditional English cottage style. At the rear where the extension is located the house received a new modern look. By choosing a wooden cladding with large windows frames makes this side a balanced contrast to the existing building. The whole project is a well thought success and it is become a sustainable renovation.