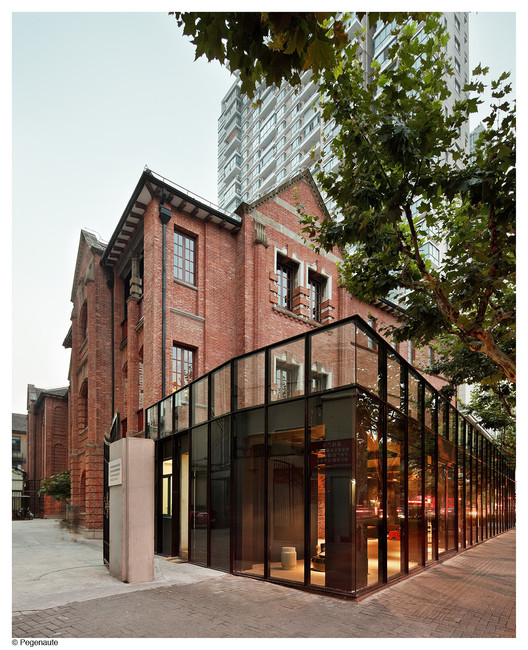 Text description provided by the architects. Design Republic Design Commune, located in the center of Shanghai, envisions itself as a design hub, a gathering space for designers and design patrons alike to admire, ponder, exchange, learn, and consume. It houses the new flagship store for Design Republic, a modern furniture retailer, alongside a mixture of design-focused retail concepts, including books, fashion, lighting, accessories and flowers. The Commune will also have a design gallery, an event space, a café, a restaurant by Michelin-Starred Chef Jason Atherton, and a one-bedroom Design Republic apartment.

Situated within the historic relic of the Police Headquarters built by the British in the 1910s, the project takes a surgical approach to renovation. First, gently removing the decaying wood and plaster, then carefully restoring the still vibrant red brick work, while grafting on skin, joints, and organs onto parts that needed reconstruction. And finally with the attachment of a brand new appendage which, like a prosthetic, enables the existing building to perform new functions, the nearly abandoned building begins its life again.

Replacing the rather dilapidated row-shops on the street front, Neri&Hu introduced a modern glassy insertion onto the brick façade. To accentuate the historic nature of the main building, the street level periphery is enveloped by transparent glazing to reveal the existing brick work and rough concrete structures. Breathing new life into a traditional colonial building plan, Neri&Hu strategically removed certain floor plates, walls, as well as ceiling panels, to allow a renewed experience of the existing building, one that is fitting for the new functions to which the building now needs to respond.

Various small and precise incisions have been made in the interior architecture to reveal the building’s history and integrity while creating experiential intersections for a coherent experience when moving through the building. Contrasting with the exterior which has mostly been left intact due to historic preservation guidelines, the interior has been completely transformed. The starkly modern white rooms are juxtaposed with untouched remnants of brick walls, and in some cases, exposed wood laths underneath crumbling plaster walls. The clear intentionality behind the detailing of connections between the old and the new creates a visually and spatially tectonic balance in relation to the building as a whole.