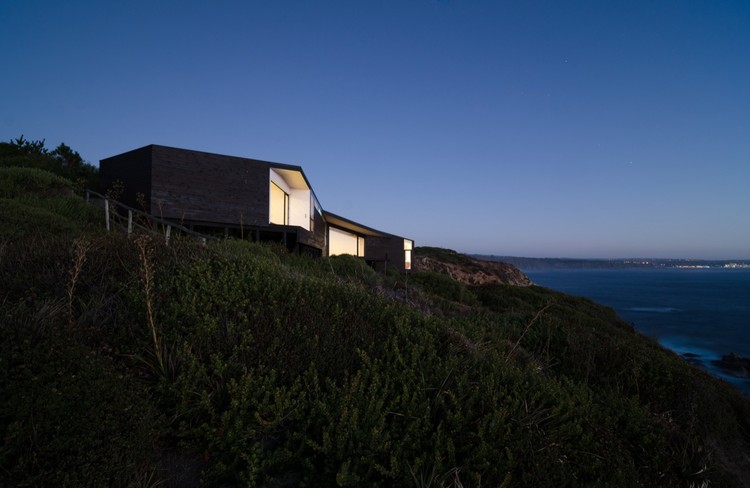 Text description provided by the architects. The house is located in an area with a intrincated topography, 35 meters above the Pacific Ocean, in Tunquén beach. The dramatic slope is understood from a resignation to the inevitable need to build livable floorplans.

The house is designed as a lightweight volume, entirely in pine wood, set on a concrete base that links to the rockiness of the ground. On the outside, it has worked as a continuous black shell that has been cut and detached from the cover and from the  ground, to bring up the openings of the windows. By contrast, the interiors are continuous and neutral. White grout on the walls and ceiling serves to preserve until dusk the natural light in the inside, and  to reveal the variety of colors of the enviroment, the  Pacific Ocean, the twilight, and the vegetation, that appears in continuous movement and transformation.

There is  a generously sized room for parents, and two smaller for the children. A large common space, that includes the living room, the dinning room and the kitchen, works as an articulator of the three “arms” of the house.

The aggregates and wood used were founded in the immediate area, same for the fournitures in Kitchen, dinnng room and living room, made of recycled wood from old houses of Valparaiso. We like to think that there is some relationship between the heights of these new spaces and heights of the old houses and salons from which these woods came from.

There is not power line in the area. Thats why the house is fed by a system of solar panels and a pump that draws water from wells,  falling by gravity and feeding the house, being an absolutely independent and autonomous system. This puts the user in a position of austerity, very far from the large energy consumption of the big city.