Designed by SPEECH Architectural Office, their winning proposal for the Tretyakov Gallery in Moscow supports the philosophy established by the museum: preserving the national heritage and engaging in relevant dialogue with the society. This dynamic dialogue is expressed in the architectural concept of the building’s façade, decorated by white picture frames of various sizes placed according to the pattern of the original hanging of the pictures in the City Art Gallery of P. M. Tretyakov and S. M. Tretyakov, forming the image of a wall with pictures. These are living pictures created by the visitors to the museum. More images and architects' description after the break.

The State Tretyakov Gallery is a museum that symbolizes Russian culture, conceived by its founder as an open institution accessible to the public, which “is useful for many and enjoyable for everyone.” Following the philosophy established by P. M. Tretyakov of keeping pace with society, changing along with it and responding to its needs and demands, the State Tretyakov Gallery today is striving to become a “museum of a new type,” an interactive space where multiple communication links are established in order to unite the elements of the museum’s traditional conservatism and dynamism of development.

The Museum Quarter amalgamates several buildings of different epochs in different styles: the main building of the Tretyakov Gallery with façades designed by the artist V. M. Vasnetsov in a romantic Russian style; the Shchusev buildings, the depository and the engineering building, which façade styles share the same Russian motifs (red walls, white decor, architraves on windows, glazed tiles), and several residential houses of the 17th to 19th centuries. The new building of the Tretyakov Gallery completes the establishment of the Museum Quarter, fitting naturally into the structure of the complex.

The material and color scheme emphasize the architectural continuity of the Tretyakov Gallery buildings constructed in various historical epochs: a combination of red walls with white architraves and ornamental elements. Based on the Russian style of the façades of the buildings initially introduced by V. M. Vasnetsov and representing a reinterpretation of traditional Russian architecture, the facades of the new buildings are made of distressed red bricks with a surface pattern and the white elements of window architraves made of architectural concrete that complete the relief tables and columns. The round corners of the building’s brick ornaments soften the general outline of the building, which fits snugly within the plot.

Fragments of the masterpieces exhibited in the gallery are featured on the outer glazing with gradual fading. And the immobile monochrome paintings come together with the movement of the colorful stream of the visitors, which fills the pictures with life and creates the effect of mutual penetration of the building’s interior and exterior.

The main entrance, located at the crossing of the main footpaths, has the form of a picture frame surrounded by glazing which gradually merges into a skylight spreading throughout the building and connecting the present day with history before turning into a pedestrian bridge. Upon entering the foyer, visitors subtly become creators of the main masterpiece of Tretyakov gallery: a constantly changing picture in honor of the visitor, which shows the actual image of the present day and remains constantly up-to-date.

The façades continue the main theme, that of pictures on the wall. Each “picture frame” of the façade is special as a carved architrave and has a unique form and pattern. The frames have different sizes due to size differences in the surrounding space. From the broad embankment to the narrower Maly Tolmachevsky Pereulok, the scale of the streets and buildings gradually gets smaller and determines the structure of the extended façade with its transition from large chaotically placed “frame windows” to a rigid structure, embodying the scale of the construction environment.

The façade facing Lavrushinsky Pereulok is a partial allusion, preparing the viewers for the main event of the “living picture” at the main entrance. The smaller size of the frames corresponds to the scale of the construction environment while maintaining their unique character against the background of the building. 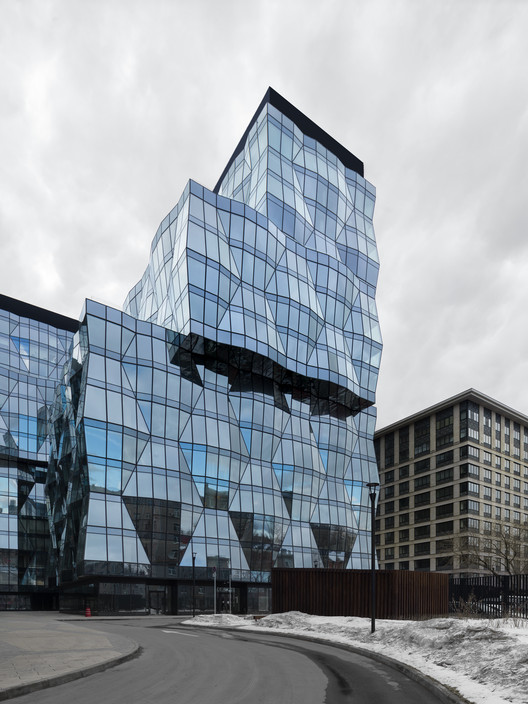