Text description provided by the architects. A new architecture redefines the urban landscape of Rome historic centre according to contemporary taste. It's the steel and glass «Lantern» of the "Ex Unione Militare" building, situated between Via del Corso and Via Tomacelli, that crosses the four floors of the building from the ground-floor up to the panoramic terrace with a view of the dome of the Basilica of Saint Ambrose and Carlo al Corso.

A contemporary interpretation of the historic centre has led to a minor intervention on the outside of the building, whose original construction dates back to the end of the XIX century, focusing on the renovation of the interiors and roofing. The restoration of the outside has focused on the recovering and valorization of the original architectural features of the building. The architecture of the facades has been highlighted through a minimal light design intervention, which gives a touch of contemporary to the building whilst putting it in connection to the city.

The large «Lantern» is the symbol of the project, the heart of the intervention. A steel and glass triangular-shaped structure that crosses the entire building and contains the vertical connections, the service and accessory rooms as well as part of the plants. The full-height void created by the “Lantern” generates a glimpse along the structure of the various floors, which are interconnected through gangways.

The part of the «Lantern» functioning as roofing reaches a maximum height of 7,50 metres from the floor and accomodates a300-square-metre panoramic restaurant space. From the panoramic viewpoints of the city, the «Lantern» hit by natural light takes on the appearance of an irregular mirror rather than an icy lake, whereas at night it lights up and takes on the shape of looks as a large lamp.

In the evening, the facades of the building light up and look like a theatre set, the atmospheres change and the audience can enjoy from the outside the internal show of lights and colours.

Each floor offers visitors a unique space characterized by white floors decorated with «bubbles» of different size and colour, ranging from red shades to orange and violet tones. The ground floor,  set up as a large bazar full of colours, objects and accessories is a wide and porous open space connecting via Tomacelli to the adjacent square.

The interiors have been designed by Fuksas as shiny elements inspired by children toys. They are sculptural objects with fluid shapes mostly made of fiberglass and characterized by a shiny white colour. Tables, desks, pouf, display racks, «spinning top» for garments and accessories that gently fit into the exhibition areas. The «spinning top»  fan out like petals like artistic installations. Oval-shaped mirrors reflect the interiors, lights and colours as a whole. The «Lantern» acts as a theatre wing that opens on each floor. The false ceilings light up through a range of colours recalling those of the floors. A stair of led-light-lit glass steps, with shiny surfaces, connects and embellishes the spaces.

Following early earthwork, a sepulchral monument dating back to the first half of the II century B.C. has been brought to light in the basement. The sepulcher has a structure made of tuff blocks and travertine slabs, with a pedestal higher than four and a half meters where the cell, which was supposed to be partially covered, rests. The front facing via Tomacelli is an important detail, since the present street corresponds to the old route leading to the “Portus Vinarius” along the Tevere. In order to preserve and highlight the relics, a glassy flooring has been devised, allowing the visitors a glimpse over the archeological remains. 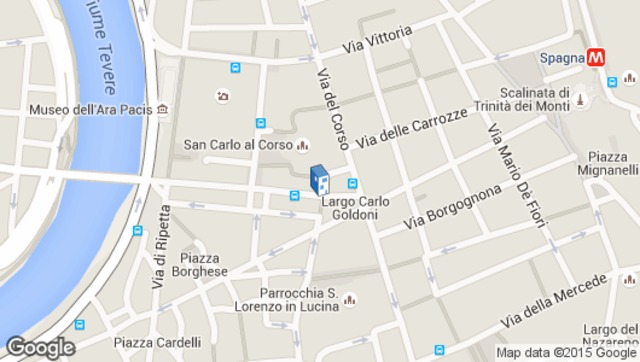