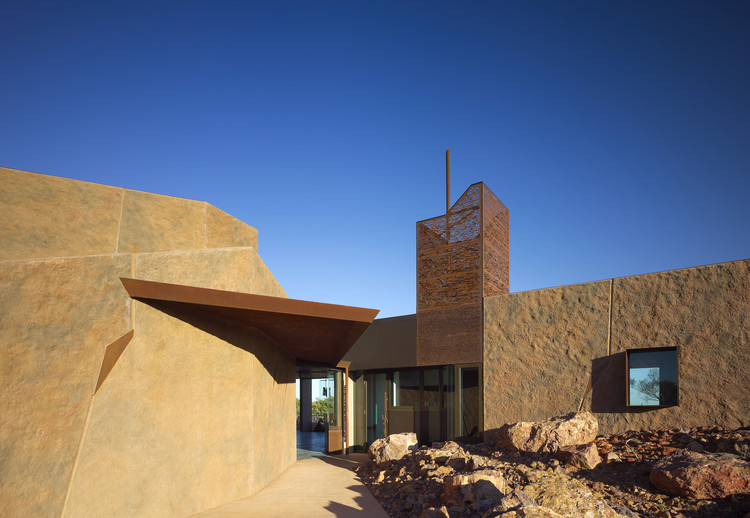 Although relatively small in stature, the Australian Age of Dinosaurs Museum is Cox Rayner’s most significant public building to date. It is also wrought large by its key role in a major operation of recovering and conserving Australia’s major dinosaur finds, regarded as one of five most significant worldwide.

It is spectacularly sites on the edge of a remote north Queensland mesa, and designed to amplify both its setting and its dinosaur-laden vast alluvial landscape. Its larger design purpose has been to evolve a new and different approach to creating a archetypical Australian contemporary rural architecture than the lightweight idiom which is most renowned.

The building comprises a visitor’s interpretation centre, a climate-controlled collections hall, administration centre, museum shop, amenities and outdoor gathering space from which volunteers are marshalled. The experience of approaching, entering and journeying through the spaces is devised to accentuate affinity with the immediate and wider landscape realms, abstracted and chameleon like.

Our passion for the operation, and the Elliott family who transformed from cattle ranchers to palaeontologists, enticed us to work entirely pro-bono; it being returned in extraordinary crafting of earthen walls, ephemeral screens, joints, lights and hardware creating our most ‘complete’ architectural work.

Conceptual Framework
As noted in the Project Description, the core idea was to create a new typology of Australian contemporary outback architecture, distinct from the stereotypical lightweight one, which forms an intrinsic extension of the natural landscape. In this case, this idea is manifest in a museum which is made of the earth on which it sits, its forms and details referencing fissures and other characteristics of the mesa setting, creating a chameleon-like presence atop the rock.

The experience of arrival and entry accentuates this concept, through a narrow aperture to a series of cave-like spaces in enclosed format, or to an openable spatial volume that takes on the character of a broad Australian parasol. The concept is not so much to replicate a troglodite, rather to generate an atmosphere synergistic with the mesa character and the robust power of the dinosaur which 99 million years ago roamed a landscape little changed over this time.

Public and Cultural Benefits
The AAOD Museum is pivotal to revival of the flailing Winton community, both through involvement and visitation. It has been a dramatic success. The Museum is also Australia’s first dedicated to conservation of our dinosaur heritage, and one of only few such in the world.

Relationship of Built Form to Context
The design is that of a horizontal extension of the plateau landscape and a vertical extension of the mesa cliffscape, a simultaneously ‘present’ and chameleon-like ‘non-presence’, thus both prominent and ephemeral. Its external shade canopies were informed by those of the historic pubs in town, and the rusted perforated screens and lights, made by hand, derived from shadow patterns of the site’s trees.

Program Resolution
The plan fits precisely the Elliott family’s brief for its ability to handle varied capacities of people, to infer complexity within a simple framework, and to create a sequence of experiences and destination points.

Allied Disciplines
The genuinely integral allied discipline was that of the family - father, mother, two sons and daughter – who became experts in different fields of craft akin to artists, a prime example being the hand oxy-torched cut perforated iron screens.

Cost/Value Outcome
Never in our experience before has a project achieved so much for so little, from people (architects, builders, community members) donating time and materials to fulfil a passion, the overall cost less than $1 million.

Response to Client and User Needs
In addition to what has been said above, the donation in one opening night of $1M to run the museum by members of the Winton community is testimony to its role in the region’s revival.

Sustainability
The Australian Age of Dinosaurs is inherently sustainable. It almost totally is formed from the earth of its site and was constructed by local community labour. Its water is sourced from a nearby well and its power from on-site generators, yet it achieves museum-standard climate control conditions for its collections hall. Very few of its elements are purchased or imported from outside the region. The hardware is hand-crafted from off-cuts; the sunscreens are naturally rusted iron plates perforated by hand, and the earth panels are textured using the same latex moulds that are used to cradle and protect the dinosaur fossils.

The central and outdoor canopied gathering and interpretive spaces are naturally ventilated, readily closed down to form with shades and screens to ‘cocoon’ the spaces in extreme conditions, and equally readily opened like a large Australian umbrella when temperate conditions prevail.

From the broader perspective, the building is designed to have minimal imposition on its landscape – even to the point where if it were ever removed it could be crushed up and dissolve back into the land. Yet if it were to endure for generations, its construction and materiality would enable to last longer than lighter-framed architecture. We genuinely believe that the AAOD embodies a new vocabulary for sustainable outback Australian architecture. 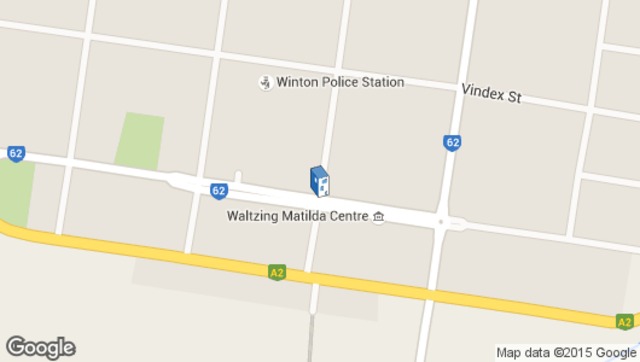