One of the selected entries in the MoMA PS1 Rockaway Call for Ideas, Stephen Yablon Architect’s "Yona on the Beach" accepts the inherent and increasingly dynamic weather conditions of barrier islands. Their idea is a new model for barrier island settlements; entire beach neighborhoods are raised high above the 100 year flood plain so that the barrier island below can naturally shift and change during storms with minimal impact to human habitation. More images and architects' description after the break.

This idea was inspired by the visionary raised cities proposed by architects in Europe and Japan in the 1960’s. The scheme is essentially similar to an offshore oil platform, supported by open steel truss columns housing stairs and elevators (which could be raised up in the event of a severe storm). Houses and commercial buildings would be modular prefabricated structures which could be lifted and installed on the platforms using cranes.

To reduce infrastructure and prevent debris and toxic waste during storms, cars would be parked in a nearby mainland parking lot. Monorails would connect the parking lot to the platform. People would circulate on the platform by walking or cycling on wooden walkways. Wood-decked public spaces surround large openings in the platform which, along with the open steel structure of the platform, allow abundant light to filter below. This is a critical element of the design as the success of the entire scheme depends on creating a pleasant experience at the beach level.

Emergency evacuation is an important consideration in the design. When evacuation is necessary, elevators or smaller public hoists scattered throughout would be used to lift all beach equipment (bicycles, surfboards, umbrellas, etc.) up into the houses. The inhabitants would then take a small vehicle or monorail to the parking decks and drive away from the incoming storm. 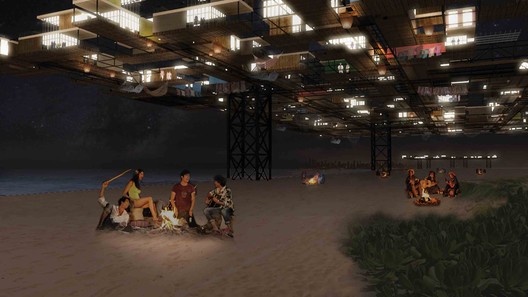