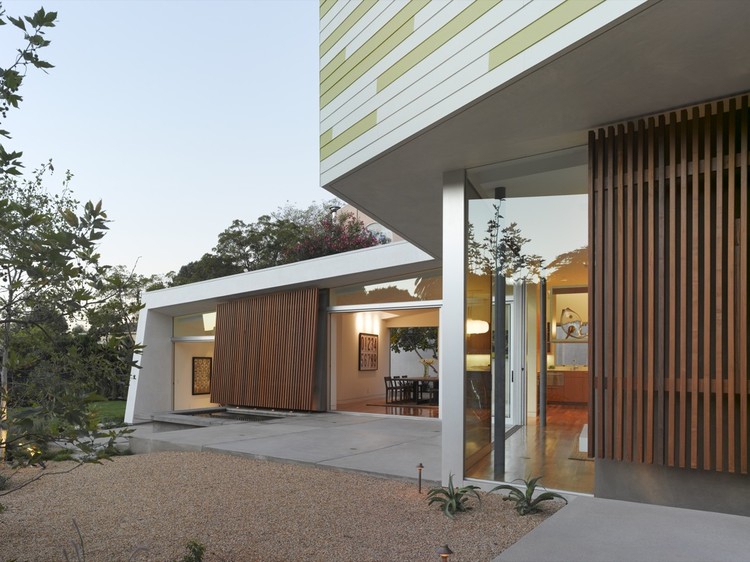 Text description provided by the architects. The King Residence is a 4,300 square foot single family residence located in the Sunset Park section of Santa Monica, a neighborhood originally developed to house workers from the World War II era McDonnell Douglas Airplane Factory. About one mile from the beach, the structure houses Matt and Erin King and their two children.

Situated on a gently sloping, wedge-shaped corner lot, the design rejects the standard public front yard/private backyard typology, opting instead for a structure whose living spaces and bedrooms open onto a relatively large exterior patio/garden/entryway that faces the public streets and surrounding houses. While this arrangement puts much of the family’s communal and individual life on display, this is a positive feature for the Kings. The children delight in calling to their friends on the street, especially from their bedrooms and the large open-air “living room,” all on the second floor, while Matt and Erin enjoy an overall heightened sense of neighborliness – friends and neighbors (and even strangers) drop in at all times. The house’s blurring of public/private boundaries (beyond the typical indoor/outdoor kind) reinforces the sense of community that they embrace and encourage.

While the house’s formal design facilitates this more open relationship with the surrounding community, it also acknowledges that there is some tension between the public and private character of what, in the end, is this family’s home. Read in a more volumetric way, the house can be seen as a solid mass in which one corner has been carved away, revealing the house’s inner life and creating the main patio, around which the resulting “L” shape is organized. But the structure can also be seen as series of vertical and horizontal planes, and according to this interpretation, one can see that the house’s green and white cement board walls, inflected in towards the site, have a sheltering, privatizing quality. Similarly, the roof of the dining and “hangout” wing, angled down to follow the gentle slope of the site, anchors the structure and its inhabitants to the earth - and to each other.

These formal qualities also help the house fit well into its surroundings. By responding to the street corner with a void, instead of a volume, and setting the house towards the rear of the site, the house does not crowd the neighborhood – it exudes a sense of politeness, of generosity. This quality is reinforced by its composition of overlapping planes and layers, which break up its mass and project a sense of permeability; from down the street, one can even see straight through the house. These intentions carry through to the strategies for cladding the house, the best example being the way in which the two-toned cement board pattern, echoing the character of leaves on nearby trees, helps to dematerialize the structure. The wood screens have a similar effect.

Both inside and outside, the house’s design manages to be both serious as well as casual – to create the conditions for a flexible, open, communally-oriented lifestyle, while at the same time employing a refined palette of materials and details. The generous use of natural light activates the house and creates excellent lighting for the family’s art collection. A number of sustainable features are also incorporated. For the Kings, the house functions perfectly for their individual and collective lifestyles, and embodies the values in which they believe.