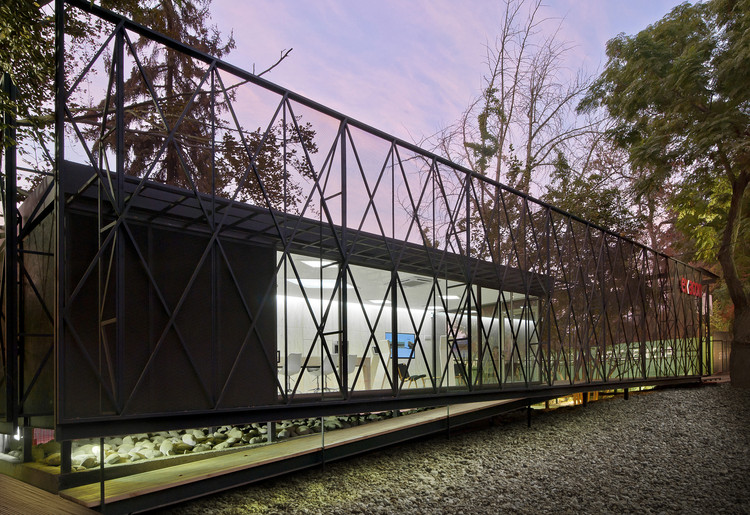 Text description provided by the architects. The starting point for the showroom design was to adopt spirit from Plaza el Alba Offices, Exxacon real estate project. This spirit can be defined as a “Park like Building” and is with this premise that we confronted the development of the project.

The client assignment involved requirements synthetized in three main concepts: simplicity, nature and vanguard. In addition the project genesis ought to be in tune with its lay motive: A showroom that articulates itself between the limit of private and public, without interfering with the work space of the main construction. But above all it should incorporate in its emplacement and form the natural environment: Exxacon rescued species from the pre-existing plot. These species account for the distinctive vegetation of the project terrain, and are fundamental pieces for the architectonic project that may be proposed for the place.

In this way the design was developed as an elegant architectonic element, simple in its formality. It accounts for its lightness and consistency with the natural environment of the project emplacement. On top and regarding the green surroundings of the showroom and accesses to the plot, we determined the need of including an open and large space as part of the room that became the point of encounter and contemplation between the customers and the trees of the place. That way the idea of an Access Deck that welcomes the customers was born. Its structure would embrace three pre-existent species showing the current objective of creating bonds with the place’s nature and with the definitive project to be delivered on 2014.

This showroom is an architectonic object suspended on top of pilots, misaligned from the axis of the closing wall, with the purpose of standing out like a sales device. The structure is made of steel pieces, structural plywood plates and OSB panels, achieving the objective of being totally detachable and reusable.

So as to attract the attention of pedestrians, a concept of layers or skins was proposed: The showroom glazed volume presents itself inserted in a bigger and more permeable volume, which separates by virtual plans and an unfolded steel net that ends being the main facade of the whole. This allows showing its operation towards the public space but weighing up the light so to give a more pleasant sensation in its interior.

The main sales space was a huge challenge as well. The client assignment was still aligned with the concepts of simplicity and neatness, plus wanting to count with an illuminated space, comfortable for customers and above all that reflected Exxacon spirit. Because of this a Scandinavian design was proposed as interior design, highlighting the white tones of the wood by means of white lead watery paints, with a supporting wall which encloses services such as cafeteria, audio and image and closets for the sales representatives. The illumination was delivered through big rhombus built-in lamps, maintaining the corporate line of the sales room’s façade. For customers care a central and light counter was design with built-in monitors so to facilitate the information given by the sales representatives to the customers.

Exxacon El Alba ShowRoom is a simple project; however, it has a high corporative impact and an elegant presence. Through subtle spatial operations and a sales program exhaustive synthesis we were able to deliver an attractive element for the customers, reflecting a brand new image for the city and the natural environment in which it’s immerse. 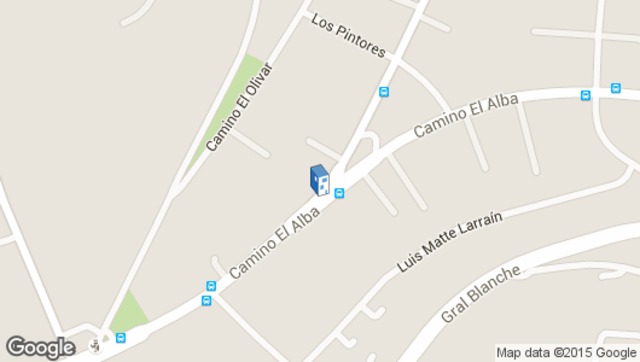 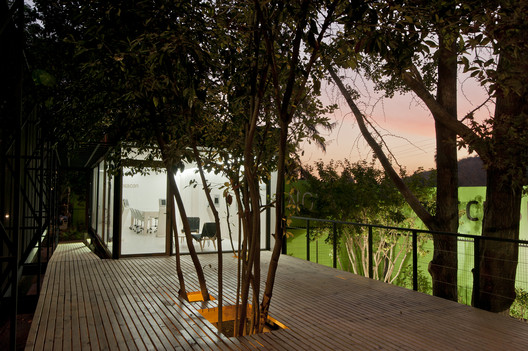