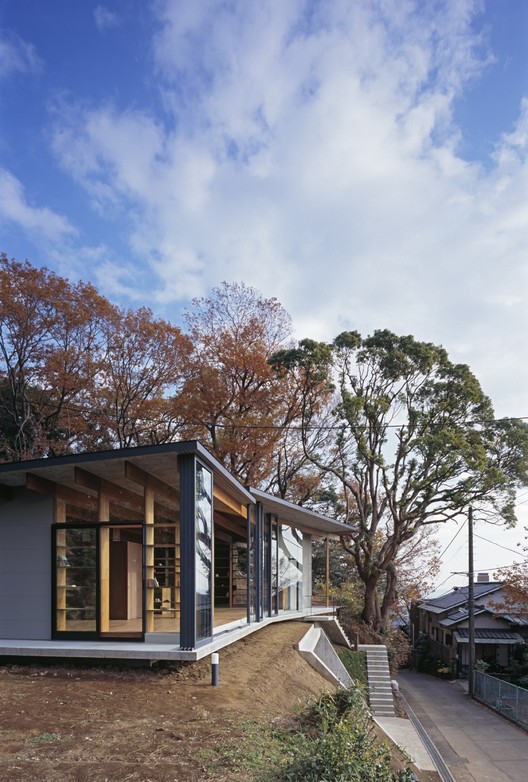 On the crest of Hakone´s mountain range along the Odawara plain is a site.It´s sunny rolling hillside was once planted with fruit trees.

On the south side you have a clear view of the distant Sagami Bay, north of the site a mountain gives shelter from the north wind.Deciduous broad-leaved trees cast soothing shadow in summer, in winter they shed their leaves and allow weak sunlight to warm up the moist mountain soil.

The perfect living environment was there, waiting quietly to be found.Rather than bringing a new priciple that is not derived from the land in order to complete a normal“ house, a place of habitability should be established here.

My mission as an architect is to draw out the latent “habitability” of the land, adjust and amplify it, so that it provides just enough for a man to live.In short, we aimed to construct an architecture completely organized by the land.

The resolution is to reduce the designing step and leave only fundamental constructive factors, setting frames and building a roof, then we “listen to the land” and make a decision.

Two sets of portal frames (about 12m in length) are combined in an angle to fit the slight curve of the place and form a rack assembly with truss structure at the center.The material used as frame is laminated veneer lumber (38 x 286mm).The thin structure is being achieved by efficiently distributing horizontal force on weak axes to the back core through a ridge-jointed truss underneath the ceiling.(The cross points in the middle part prevent a deflection of the 6-meter-long beams.)

These fin-like columns with shelf plates also play a role of semi-transparent partition that separates the space loosely. Each beams slant is in a northward direction to support the roof that has enough pitch to handle the rainy weather and differentiate the ceiling height.Together with the tilted ground, this gives the spatial “variation” that complex life requires.

As you see, the features of this site (geomorphic characteristics, amount of rain) add a special “geometry” to this architecture.It determines the structure and the resulting dwelling space and brings harmony amongst them.

If you, as the origin of the word indicates, decide the order of an architecture (=geometry) by taking a close survey (=metria) of the land (=geo), the consequent architecture will have clear order while retaining the continuity of the land.

“Observing the site closely and finding its hidden geometry.” That accounts for almost all of our design works and, is essence of it.