"Space, lines, light and sound" are the essential components of the experience of architecture and the most profound buildings have captured these moments through thoughtfully orchestrated design. Recently, architects that have designed churches with these primary elements in mind have come under criticism by the Vatican for diverting from the traditional form and iconography of churches. According to a recent article in The Telegraph, Massimiliano and Doriana Fuksas' design for a church in Foligno, Italy has been labeled as problematic by the parish and Cardinal Gianfranco Ravasi, head of the Vatican's Pontificial Council for Culture for its resemblance to a museum instead of a place of worship - based on traditional Catholic values placed on the altar and imagery. Regardless of the Vatican's criticism of the aesthetic approach of architects that break with tradition, this seems more of an issue of miscommunication between the architects and the congregations that have commissioned the projects that are being criticized.

In favor of this aesthetic, consider Le Corbusier's Notre Dame du Ronchamp, a modest Catholic Church built in the 1950s just outside of Paris. The primary character of this church is that of an architecture of pure space, detailed by light through the careful placement solids and voids. Its essential character, dictated by a reductive aesthetic that stepped away from the traditional extravagant detail and ornate religious figures of the traditional churches of the time, is that of a pure meditative space. The modernist aesthetic permeated Corbusier's take on religious architecture and it seems that contemporary architects have followed in these footsteps, breaking from tradition to create a religious experience based on meditation and contemplation regardless of creed.

Places of worship can take many forms. Essentially, they are spaces that allow for contemplation, reflection and meditation. The traditions steeped within each tradition have dictated the architecture for centuries. But as Tom Kington's article in The Telegraph points out, "the last architects to work closely with the church were back in the 17th century Baroque era". The work we are looking at today has attributes of a universal approach to religion. The buildings are manifestations of the values that are common over a broad scope of religious beliefs, but may also be accepted by secular, non-religious people. The iconography is frequently maintained, but is less emphatic when compared to the altar of a traditional Catholic Church in Rome, for example.

See below for some selections of modern churches featured on ArchDaily that have aspired to create spaces of religious meditation and contemplation but have been criticized for being more like museums than places of worship and tell us what you think. 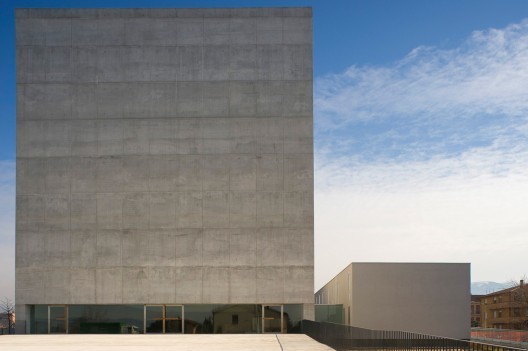