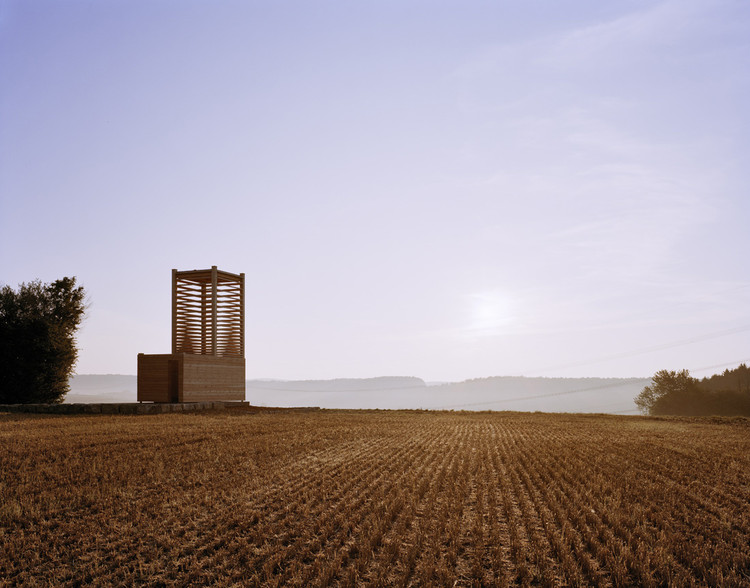 Text description provided by the architects. The Field Chapel is a project designed and executed by the students of an Advanced De-sign/Build Studio at the Illinois Institute of Technology College of Architecture in Chicago for a ecumenical church co-operative in Boedigheim, Germany. Led by Professor Frank Flury, the project was assisted on a pro bono basis by the firm of Ecker Architekten (Buchen, Germany) with the craftsmen, volunteer workers and townspeople of the Odenwald/Bauland, a rural region in northern Baden-Württemberg.

The task of the design was to create a place of spirituality. Professor Flury defined the project for the twelve students who come from Alabama, Alaska, California, Florida, Idaho, Illinois, Tennessee and China, as "an interdenominational chapel, a space for people who are in a search for God – a place for quiet reflection, but also one that welcomes hikers and cyclists who appreciate a rest stop that has a sense of beauty. "

In January of 2008, the Reverend Moser-Feesche contacted Ecker Architekten with the intent to build a chapel. He had no funding, held no property, and did not have the support of his con-gregation. He did however, have a specific idea about what this building should be and where it should be located.

Dea Ecker received her Master degree in Architecture at the Illinois Institute of Technology (IIT). Her long-time friend and former school colleague, Frank Flury, is a Professor at IIT, and teaches an Advanced Studio for Design-Build Projects at the College of Architecture in Chicago. After discussing the potential of a Design-Build project with the Reverend, Ms. Ecker contacted Prof. Flury. The project constellation seemed to fit. Flury’s studio has designed and built diverse projects in the U.S. that have had a positive social impact. This was the first viable possibility for the students at IIT to execute an international project.

In December of 2008, Prof. Flury visited Boedigheim to examine the site and to discuss the project with the Reverend. After this initial meeting project responsibilities were agreed upon: Flury would guide the design and construction of the building, Ecker Architekten would work with local officials and obtain necessary building permits, and Reverend Moser-Feesche would secure property rights and assemble the community for the volunteer work necessary to complete the project.

In January 2009 Flury introduced the project to the Design-Build curriculum and received an enthusiastic response. Over the next 3 months, 12 students developed three design alternatives. In March 2009, these projects were personally presented to the governing municipality of Buchen and the citizens of Boedigheim. A After lengthy discussions two projects were chosen for further development, with Prof. Flury ultimately responsible for the feasibility of a final proposal. Armed with a donation of lumber from the city of Buchen, the “Professor from Chi-cago” and the “Reverend with an idea” asked for the trust and help of the townspeople to realize the project. With commitments from the local blacksmith, carpenter, sawmill owner, and the farmer (whose field the chapel was to be built upon), the town of Boedigheim agreed to implement the project.

Tasks were subsequently delegated. Prof. Flury developed the design with his students to ensure completed construction in a single summer semester. From March through May, the Design-Build Studio and Ecker Architekten were in constant contact. E-mail, AutoCAD, and Skype teleconferencing were the tools used to translate a student project designed in an American university into a set of working documents that met or exceeded German construction standards. Dea Ecker contacted the local officials and prepared drawings to obtain the necessary permits in time for the groundbreaking scheduled for early June. The Reverend Moser-Feesche and the community were responsible for the acquisition of property rights and for the collection and coordination of accomodations for the students during the construction phase.

The student group arrived in Germany during the first week of June. Despite an unusually rainy summer, the project progressed smoothly. With the help of countless volunteers, the chapel was constructed in just 8 weeks. Over 400 people witnessed the official benediction on 25 July, 2009.

The ecumenical chapel stands on a hill between the villages of Boedigheim, Seckach and Großeicholzheim.

The structure is visible from afar but can only reached by foot or by bicycle via a steep country lane. The students developed outdoor facilities and space as a logical consequence of interaction: when arriving at the site, a narrow footpath leads between an existing hedge and the blank tower facade to a small gravel forecourt, which is bounded on 2 sides with massive benches made of local limestone. This forecourt represents the secular realm. A brick platform rises from this forecourt, upon which visitors enter a closed patio and ultimately the sanctuary. This platform traverses the profane to the divine.

Surrounded by 4 closed walls, views are limited to the sky and the tower, which encloses the chapel sanctuary. "The courtyard and chapel are situated in a sea of faith," according to the students. "The Secular and the Sacred touch each other, they are connected with one another.”

From the onset of the project development, assembly details were designed to ensure the cha-pel could be completed by students without construction skills.

The entire wooden structure was cut on a CNC machine according to the student’s drawings. The receiving slots in the four main columns of the tower for the louvers were subsequently hand routed. Not a single plank was sawn on site. The students developed the drawings in various CAD programs and produced the individual components with hand tools and computer-assisted machinery.

The project is in the truest sense of the word sustainable:

The chapel design was based upon utilizing donated, renewable and local materials.

The wood comes from the municipal forests in Buchen and in Boedigheim and was dried and cut at the sawmill less than 2 km from the chapel site. The high sap content of Larch allowed a construction without any handling or weatherproofing of the wood surfaces. This surface will eventually weather to a silver-grey partina. Bricks used in paving the tower platform were left over from a nearby building site and donated to the project. The gravel used for the forecourt is dredged from the Main River, and Limestone blocks are quarried within walking distance from the chapel. All the components were either fabricated by the students in the carpenters’ shop or made by local craftsmen. With the exception of the steel used to in the fastening screws and column anchors, all materials come from locations within 40 km from the building site.

The Dematerialization of Traditional Construction

Apart from the architectural filigree of the tower enclosure, the building appears traditional in its construction. It has a simple shape, and is formally related to both the Biblical Temple of Solomon and to vernacular tobacco-drying barns still found in the region.

The entire wooden construction rests on 8 steel moment-frame anchors, which are sized to expose a thin gap between the massive brick platform and the timber structure. This articulated joint makes the heavy building appear to hover weightlessly above the ground plane. The 3-meter high building base seems monolithic, and the full-timber diagonal bracing that lends the structure its stiffness is hidden from view - initially by diagonal planking that is an integral part of the structural system, then ultimately by the 50 mm wood siding that clads the entire first level.

The base braces the entire construction, and allows the four main columns to cantilever verti-cally for the next six meters without additional bracing. Despite the massiveness of these col-umns, structural calculations indicate that the roof of the chapel could sway up to 5 cm in a 100-year storm.

The 9-meter high chapel tower, as seen from the exterior, appears diaphanous and permeable. Louvers cladding the upper portion of the tower are mounted incrementally further from one another as they rise in relation to the solid, enveloping base. This calibration of enclosure makes the tower appear to be expanding in height, and results in an remarkable play of light and shadow as one moves around the building. A parabolic geometry appears though a moiré effect the louvers make when the tower is seen diagonally. This openness, however, is not perceptible from the interior of the chapel. From inside, the distance between the louvers appears to be identical, collapsing the perspective space. The volume of the tower appears as a completely closed volume – an introverted space of reflection and silence, occupied only by an ever-changing body of light. The distortion of perspective transforms the volume into an abstract body that is simultaneously intimate and limitless.

In many U.S. universities, an apprenticeship is not required for a diploma in Architecture. The pedagogical approach of the IIT Advanced Design/Build Studio attempts to connect the head and hand. The confrontation with the entire architectural process - from the design sketch to the ribbon-cutting ceremony - provides students with a practical experience that both parallels and contrasts their acquired academic knowledge.

The project has found positive resonance in the all of the participating municipalities. It has also achieved all desired goals. Diverse groups have collaborated to create something not possible separately. Cultural and religious differences were bridged, new friendships were forged, and a chapel was built. 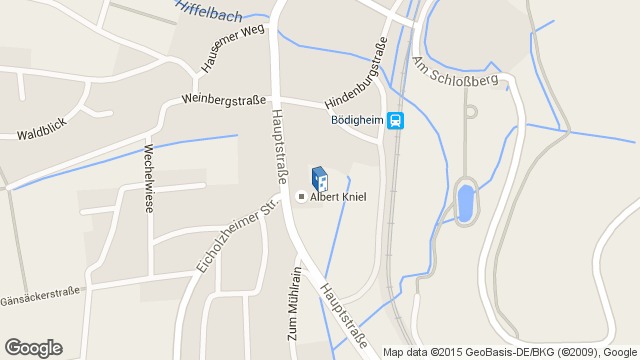 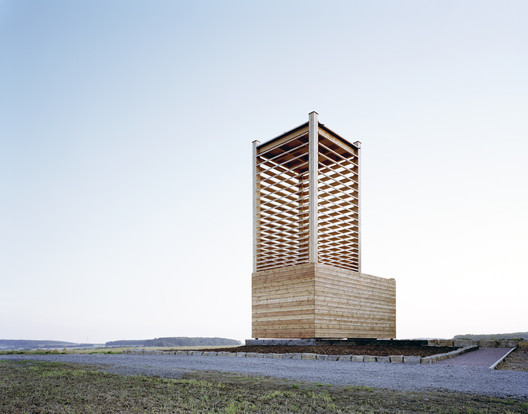 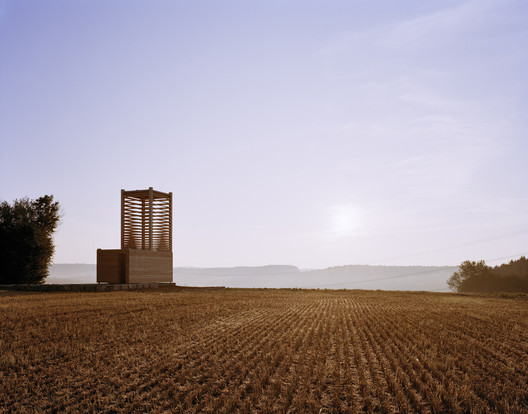