Taking advantage of the competition site’s strengths, this proposal by Mauro Turin Architectes for the Museum of Bavarian History features, on urban terms, a system that serves as a liaison between the banks of the river and the old urban fabric of the city. While do so, the project also acts as an articulation of urban spaces through its various places and passage, creating a symbolic point of convergence. More images and architects’ description after the break.

The competition site for the Museum of History in Bavaria takes advantage of a privileged position in the city of Regensburg, UNESCO World Heritage Site; it is both part of a unique built environment with a medieval character while facing the majestic river Danube.

The volume of the Museum is crossed at its lower levels by a large portico in order to create a stepped passage that leads gently passer-by towards an urban space to another. It is used in a bidirectional manner; it attracts to the river landscape and invites to discover the city.

With its precise urban position and strong stature, the Museum is an undeniable attraction with a firmly institutional character. 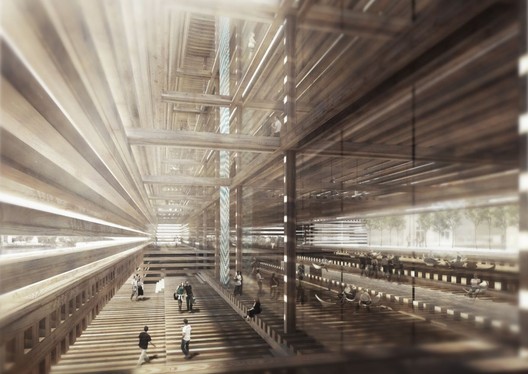