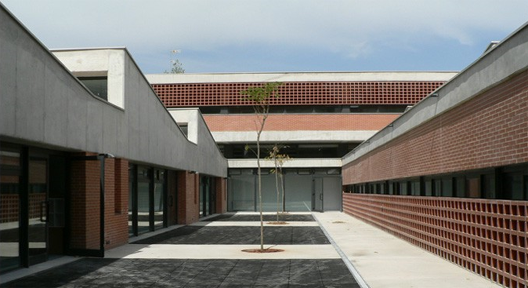 Text description provided by the architects. The new Jacinto Castañeda arises from the total replacement of the old school in an adjoining plot, keeping only the block of the gym. The plot of expansion is located on the Cami de la Bola, in the town of Xativa.

This is an expanding area of the town at its southwestern end characterized by medium-density buildings (single-family house in a row of three heights). The plot has a rectangular shape, bounded to the south by Geógrafo Estrabón Street, to the north by the Cami de la Bola, and to the east it shares a party wall with the current center and with another lot of municipal ownership.

The area of the lot had a sharp slope as it was located on the mountainside, with a vertical difference of 12.50 m between the upper and lower streets. For the reasons discussed above, we proposed a replacement of the existing building with a project in two phases: In the first phase we intended to construct a new building with almost all of the program in the adjacent plot, without interfering in the functioning of the existing building.

Once the new building was finished and put into operation, the second phase would take place involving the demolition of the existing building, retaining the areas that could be used such as the gym and the caretaker’s house. We would proceed to build the dining hall and complete the development of the lot by integrating the spaces freed by the demolition to obtain a unitary result. Ultimately and due to the needs of the center and its students, the dining hall was built during the first phase.

The response to the characteristics of the site has been instrumental in the design of the project as well as the relationship of the building with the lot of the existing center and the buildings that are preserved. The building is arranged in three levels that are adapted to the slope of the land to allow a good relationship with the exterior surfaces, facilitating accessibility and avoiding excessive earthworks.

The orientation of the volumes is arranged to capture the maximum natural light and to prevent casting shadows between the built volumes. In this way, the building is located on the western edge of the lot and is terraced to capture light from the south and the east, and at the same time maintain the distance with the existing building.

Therefore, access to kindergarten is from the same point but differentiated from the access to primary school, which is slightly higher (+0.90m), establishing an independent operation that allows easy communication.

The first floor contains six primary school classrooms with common rooms such as the library, multipurpose workshop, computer, and music room. The classrooms are laid out in two parallel areas that make up a longitudinal courtyard and are oriented to the east, while the circulation corridors are oriented to the west. On the upper floor are two other groups of six classrooms, laid out in an L-shape that lies on  the upper limits of the lot, and allows the orientation of the classrooms towards the east and south.

This volumetric configuration is adapted to the slope so that each of the three levels has a level access to the exterior, which facilitates evacuation in case of fire and allows quick access to outdoor recreation areas. Vertical cores are distributed at the center and at the ends of the building to facilitate circulation, fire compliance and accessibility.

The dining room and kitchen are located in part of the current lot, and are conceived within an independent single-story volume that absorbs the existing transformation center. The building for the new center has been arranged to allow the integration of the two lots ensuring a result consistent with the design of outdoor spaces.

To bridge these two levels we use a strip consisting of a set of stairs and ramps that are flush with the extension of one of the arms of the kindergarten building. This mechanism allows us to generate the necessary exterior space to locate the three classrooms required as possible expansion.

At the top of the lot, one of the classroom blocks with north-south orientation is laid out creating a porch that accesses another ramp that ensures accessibility to the gym and makes room for the expansion of the center with six extra primary school units, as shown in the drawings provided. 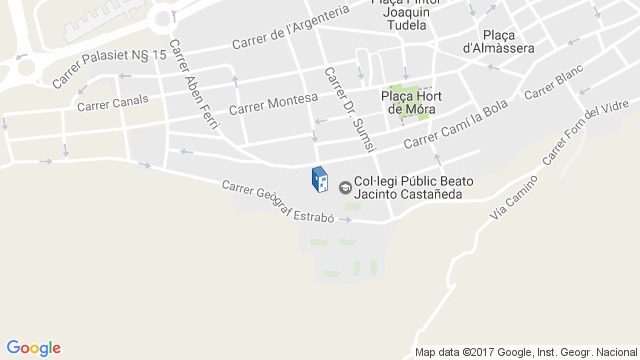 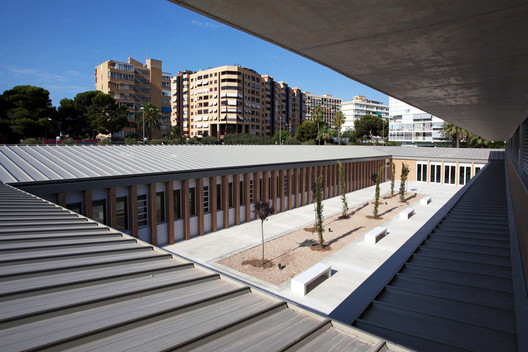