Designed by Envés Arquitectos, their proposal for the New Central Library in Berlin was named as one of the winners of the competition, which is conceived as an open, public, free and comfortable meeting place; summing up, an urban lobby. This flexible place is able to interact with a changing user (from a kid to an ancient), but simultaneously ensures the area’s accessibility and right usage. The library also aims to become an activity catalyst, a landmark to be perceived from far away. More images and architects' description after the break.

A library has become one of the few public places that still remaining affordable for citizens, where they are able to enjoy recreational activities (playing, eating, resting, reading…) and to have shelter from uncomfortable weather conditions. This open/closed condition is known as “Clever Flexibility” (opposite to the overall flexibility where any activity can be developed anywhere) and different areas where program is certainly established from those whose evolution is less predictable (i.e. temporal exhibitions).

While creating a landmark, the design should also create dialogue, in a continuous way, with Tempelhof Park. In this sense we introduce two opposite concepts:Continuity with the Park. Horizontal character and Park’s landmark.

We group the general accessible uses and the control spaces and we set them occupying the whole ground floor, as a great urban lobby.According to the concept of “clever flexibility”, we group the places where the books are contained in an only floor, as a transitable “tectonic plate”, placing below the rest of uses which allow an easier adaptability to further program changes.

The permanent book storage is placed below the ground level, making easier the media preservation and control. We group the  administrative places into the urban side (providing an easier public connection and a representative image of the city because of its transparency). We tilt the “tectonic plate” connecting the east-side with the park height and raising the opposite side towards the city. We remain empty the two opposite sides corners, clearly establishing two library entries.

We design the “tectonic plate” as a continuous low-slopped path through transversal ramps which enables a comfortable pedestrian accessibility as well as continuous unitary book storage, adapted to a linear thematic setup. We modulate the “tectonic plate” through a trapezoidal volume, opening skylights to the north (indirect lighting the reading places). 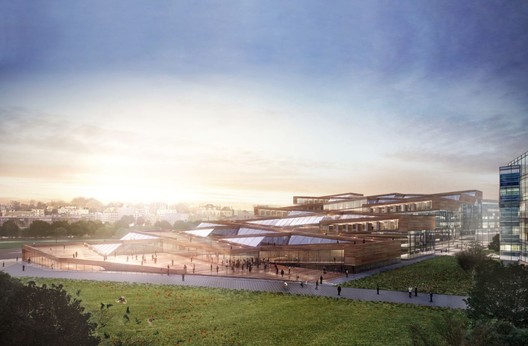