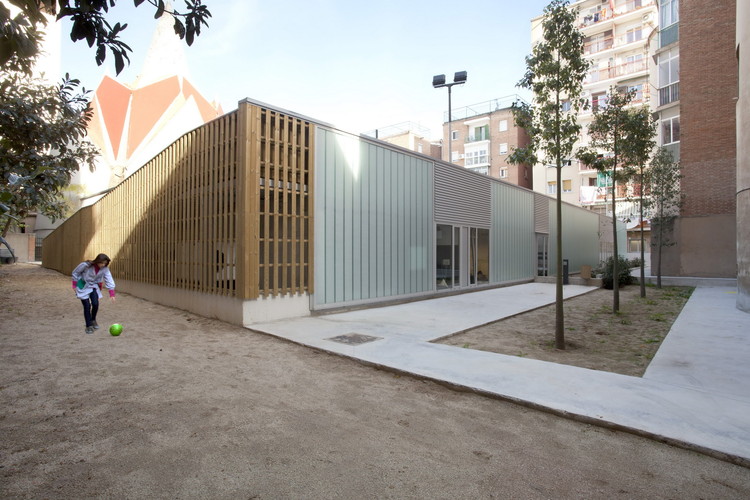 Text description provided by the architects. Initially the school was formed by three bodies without connection between them. A main building, ground floor in basement and two upper floors. A second volume, the classroom block, one plant only, also in basement, and a small tier. Only a narrow entrance, from the plaza generated by the Sant Medir’s church’s, permitted all the childhood, access to the school. The proposal includes the demolition of the classrooms block and the tier, the ground’s digging and the construction of a new building that houses the entire expansion program, which gets connected to the existing building at ground floor level. These simplifies the access to the old building with an elevator installation, set-up order in the relationship between the building and it’s perimeter, generates new play, living, and interaction out spaces, and finally creates a new accessible entrance on the backyard street, with much less traffic.

The main building (PB+2) is rehabilitated, digging its perimeter, converting the basement in the ground floor, making further improvements to comply with the rules as needed, and to connect with the new building, at ground floor level. This ground floor is also fully reform to achieve its connection with the new. The two upper floors are rehabilitated only slightly, correcting their major defects and unifying with the rest. On the backside of the old building a new communication piece is added, incorporating a lift and an emergency staircase, to improve the general circulation of the set and to adapt it, to the current regulations. In this piece, 6 primary classrooms, plastic and music classrooms, the director's office, the administration, the staff room, toilets and boiler room, are located all of them.

The new building located in the block interior courtyard, slightly buried, is built to suit the height established regulatory and minimize visual and physical impact on their immediate environment, but also allowing the building to be illuminated with natural light easily. Occupying all possible area allowed by existing management, but always respecting minimum distances of the perimeter buildings. Once established its limits, the building is developed in a consistent manner, from the confrontation between formalization, construction, construction time and cost. Host’s 4 ESO’s classrooms, workshop, laboratory, group’s classroom, the kitchen with the dining / multipurpose hall, two lobbies and toilets. Over the roof a play area and sports court is placed, with access via a side ramp from the patio, and a walkway bridge from the first floor of the existing building.

The new building supports on a concrete slab 50 cm thick, with a mixed structure of concrete walls (in the facades) and parallel metallic structures (in the inside), facilitates the use of a industrialized system in the roof, that makes very easy its construction, shortening the work time and the inconveniences to the neighbors, this aspect has been taken a lot into account throughout the process, as we work in a difficult inner building’s block. Initially the facade walls and roofs were precast concrete, with its finish seen. In site, the walls where changed, and concrete was executed "in situ", 30 cm thick, with its outer side view. In the roof we re-used concrete slabs, of the demolished classrooms block roof, and where completed with new hollow-core concrete slabs, 20 cm thick, and 120 cm wide, leaving all seen, on its underside.

The inverted cover system is solved placing first the waterproofing membrane, continuous, elastic, polyurethane, Maxelastic Pur type, applied directly on the slab. Over it is placed a double insulation of extruded polystyrene in rigid plates. The cover ends with a concrete floor poured mass "in situ", semi-polished finish with quartz powder and dye. We create a high up floor, type "caviti", formed by polypropylene coffers 75 x 50 cm and 50 cm high, with a compression layer of 5 cm. An underfloor heating system is installed over it, with reticular polyethylene multitube, finally covered by a poured "in situ", concrete pavement, all of it colored, and matted polished finish.

This camera created, ventilating and insulating slab from soil moisture. Also allows passing and distributing all building facilities, especially the complex and bulky ventilation system, require in schools today, by the new regulations. Concrete walls and structure in the classrooms, are doubled with fireproof plasterboard. Instead, partitions and facades, perpendicular to the concrete walls, are always translucent, built with a mixed semi-prefabricated system, using U-Glass + carpentry. This allows, improving and increasing naturally, lighting inside the building, reaching deep in the interior, although the building is partially buried and surrounded by other buildings of considerable height.

In the façade, the system consists in a two-sided piece of U-GLASS, 262/41/6, with intermediate vertical air chamber, within rigid translucent insulation, type Mx Moniflex A6, 30 mm thick, all mounted on aluminum profiles, that embedded pre-assembled carpentry modules, silver anodized aluminum, and thermal bridge break. On the inside, however, the partitioning or subdividing spaces system is composed with a two-sided piece of U-GLASS, 262/41/6, only with an air chamber, on aluminum section, to embedded pre-assembled woodwork modules, spruce plywood, total 8 cm thickness, with double jointed doors.

All finishes and construction systems used in the new building are incorporated into the ground floor of the existing building and can be provided to the upper floors, seeking to unify both buildings and turn them into one. 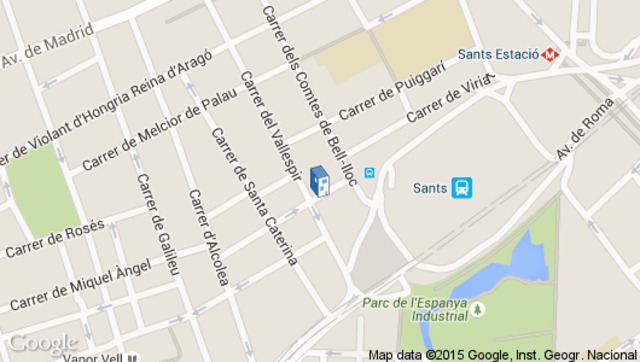