Following OAC’s win in the international design competition and completion of the master plan for the Famen Temple Zen Meditation Center in 2012, the architects recently completed the schematic designs for the buildings, landscape, and experiential features and art installations for meditation in the first phase of the project called the ‘Eightfold Path Forest’. As part of the new cultural master plan development on the site of the renowned 1,800 year-old Famen Buddhist Temple (aka Dharma Gate Temple) outside Xi’an, China, this project is one of the largest architectural and landscape commissions in the world focused around an historic religious temple.More images and architects' description after the break.

As the imperial temple in the powerful Tang Dynasty at the peak of the ancient Silk Road era, it is considered a holy place amongst Buddhist pilgrims around the world today. The Famen Temple Meditation Center project OAC has been commissioned to design, has a total 1,250,000 m2 site area and 300,000 m2 building floor areas.

This high profile project will draw international pilgrims from China, and from across the world to experience Buddhism through the design of buildings and landscape. It includes the 1km square ‘Eightfold Path Forest’, four museums and a performing arts theatre, manuscript-copy halls, several large venues for meditation activities, a Buddhist academy, an art complex, a music complex, a concert hall, a 5-star Zen-theme boutique hotel and a 5-star hotel, and over a thousand meditation lodges for meditators.

The core concept of the buildings, environment and meditative artworks of the project is beyond formality and metaphor. Our designs for outdoor spaces and buildings will bring Buddhist pilgrims and visitors into a state of meditative mind without them being aware of it, and will inspire people with Buddhist Zen philosophies, ethics and way of life through an experience of six senses instead of through formal or descriptive approaches.

It’s so-called Wisdom of Contemplation – the highest wisdom in Buddhism and the most difficult to reach. The spaces, buildings and environment we have created for this project form the ‘circumstances’ to help people reach such a state of mind. It is much more challenging than most design projects.

The best way to describe our design is that it integrates Buddhist philosophy, Zen meditation, medieval Zhou and Tang Chinese cultures and modern life into one.’ Charles Phu continued. This part of the project OAC has completed for the schematic design includes:

Buddhist Cultural Interactive Museum, which also houses a 1,500-seat theatre for performing arts alongside its exhibition use, marries Buddhist principles, original Zen Buddhist concepts of Tang Dynasty, and its geographic relationship with the Earth. Whilst the orientation of the building is 9.5 degrees northwest from the true north, the central gallery and theatre, located underground, are orientated to the true north with a perfect 2-dimensional symmetry. This allows visitors to experience through a series of experiential contrasts, which end with a performing arts space with religiousness, sacredness, purity and richness. The theatre is designed to have performances and religious ceremonial events that are interactive with audiences.

Zen Eco Museum, which includes one of the energy centers serving the development, demonstrates the religion’s ecological and environmental principles, as well as the development’s commitments to sustainable communities. It also offers educational opportunities to a wider audience.

The two religious Manuscript-copy Halls are organized using simple geometries and symmetry, linked by a meditative tunnel aimed to bring people into the meditative state of mind. Shelves for historic manuscripts and archives form part of the architectural space of each hall, providing a peaceful yet sacred atmosphere for this Buddhist meditative activity.

The project’s Xi’an-based client Qujiang Group, who realized several UNESCO and National Heritage sites in China, are planning to commence the construction of the project’s 1km square first phase in the second half of this year. 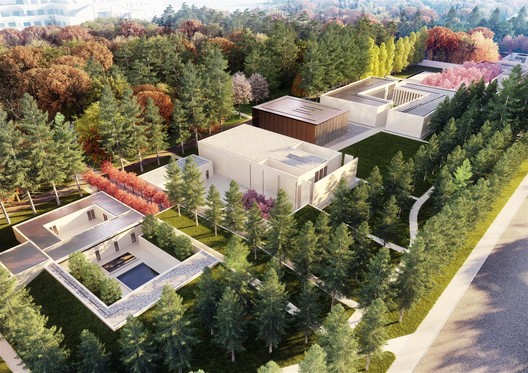