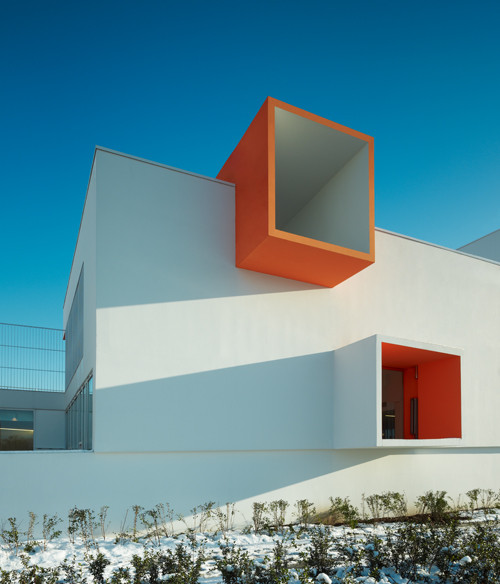 Text description provided by the architects. The project is part of the very subtle town planning scheme adopted by Bernard Paurd, in an attempt to pull together the different signs and traces that are superposed on the site like the various writings on a palimpsest.  The scheme reorganises the neighbourhood on the basis of the right-angled intersection of two historic axes, one leading from Paris– from the Saint-Michel fountain – to St Denis’ Cathedral, the other starting from the cathedral and heading towards St Lucien’s church.  This crossing of X and Y axes highlights the surfacing of various traces - ruins of a Gallo-Roman necropolis stand where the scarred landscape bears witness to the demolition of the ‘Ravel’ and ‘Presov’ blocks of flats, dynamited on 23 June 2004.  As if the map had marked the territory with a tattoo.

The group of schools occupies a trapezoid-shaped plot of land obliterated by the non-aedificandi area corresponding to the location of one of the two buildings that were demolished.  Dominique Coulon stays in line with the scheme and the intentions of Bernard Paurd, but seems to consider this scar as the substratum for an act of resilience – a psychological process analysed by Boris Cyrulnik that makes it possible to overcome traumatic situations – rather than the stigma of an irreversible situation.  He thus returns spontaneously to his work on twisting shapes, a theme that recurs constantly in his projects.

The requirement to refrain from constructing closed volumes based on the rectangle that is a feature of the plot of land, combined with the constraints in terms of density and height, has enabled him to question the separation of the primary and nursery schools in the brief.  His proposal therefore sketches out a unitary organisation, deployed with virtuoso skill in the three dimensions of the space between two poles linked by a system of ramps.  Thus the nursery school classrooms are pushed to the east, on a floor cantilevered above the entrance, and the primary school classrooms occupy areas to the west overlooking interstitial gardens.  The older children’s playground merges into the area reserved for the younger children, which already contains the shared canteen, while the sports areas have been placed on the roof of the other block, which contains the library shared by the two schools.

Despite its sliding volumes, folds and asymmetry, the building gives a first impression of an enclosed shape with few openings.  The primary school classrooms, superposed on the site, only opens up to any real extent to their gardens at the side.  Although on the outside the verticality is dominant as a result of the many indentations that break up the façades, it is paradoxically the horizontal aspect that is more evident once through the entrance.  As if an infinite universe was opening up inside a strictly defined area, welcoming a heterotopia reserved for the children.  An initiatory place where the pupils can be cut off from the adult world, so that they can adopt the necessary distance and momentum the better to dive into it in due course.

Particular attention seems to have been paid to passages from one space to another, to thresholds: entering the school, taking off your coat and hanging it up before going through the door into the classroom and sitting down in front of the teacher; laughing as you leave the classroom, and shouting out in the playground at playtime.  That is how the building works, from the entrance onwards, in a subtle two-fold movement of advance and retreat.

An arrangement that recalls the curves and counter-curves of the façade of the St-Charles-aux-Quatre-Fontaines church completed in 1667 by Francesco Borromini.  In a protective gesture, the upper floor projects forwards to welcome the children, while the glazed ground floor withdraws and digs in to defuse the drama of separating the child from its parents.  The corridors change shape and expand in front of the classroom doors and receive abundant natural light from the zenith, as if the better to define themselves as areas for decompression before taking a deep breath and plunging into the work areas.  Lastly, the canopy of the playground thrusts out well beyond the ramp that leads up to the rooftop sport areas.  This play of compression and expansion, giving an organic feel to the concrete structure, is further accentuated by use of the colour orange.  It covers the floors and occasionally spills over onto the walls and ceilings, rendering the slightest ray of sunshine incandescent and lighting up the roof area.

This has the appearance of an open hand beneath the complementary blue of the sky, revealed in all its power.  All too frequently, as in Jules Ferry’s time, schools seem to be designed as areas for adults reduced to the scale of children.  The sequences of traffic paths and classrooms are witness here to a different relationship between the child’s body and space, one that is all the more fused together in that is it not yet totally mediatised by language.  The classrooms, corridors and playgrounds of the ‘Josephine Baker’ schools stretch out and break up around an indefinite body, a body in perpetual transformation, a body of feelings ready to be touched by the slightest ray of sunshine and to perceive a thousand opportunities for play in the slightest variation in the weather.

The use of natural products – such as linoleum on the floors, and wood for the door and window frames – and the attention paid even to the smallest details contribute to making the building an almost luxurious place, a place hailed enthusiastically at its inauguration by a population of parents and pupils who are keen to turn the page of the demolitions and look resolutely to the future. 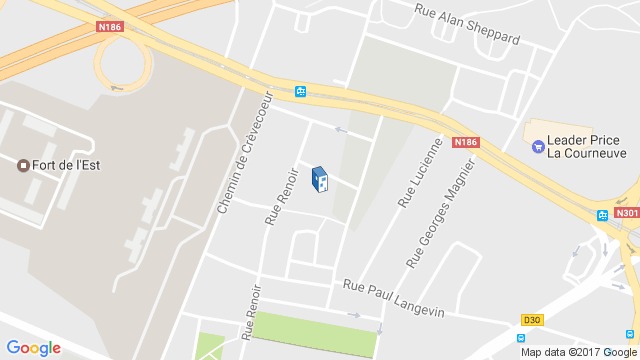