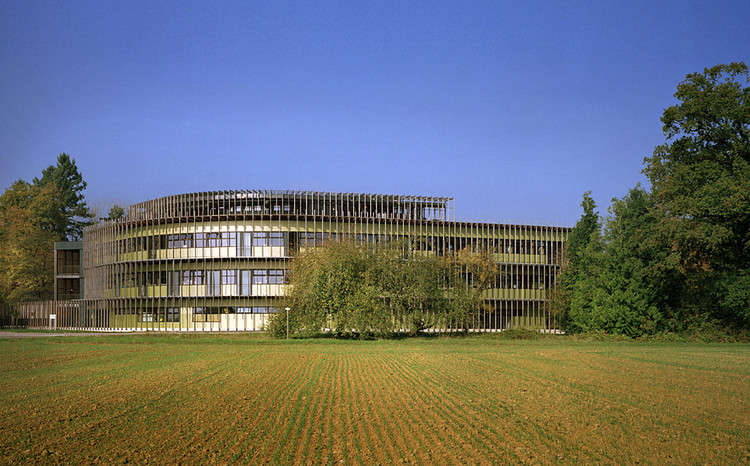 Text description provided by the architects. Research in the heart of the forest.

The Champenoux site in the Lorraine region is one of the five sites of the Institut National de la Recherche Agronomique (National Agronomic Research Institute) in France. Located in the immense forest of Amance, it has added a new laboratories and offices building on the existing site.

These high-level technical research centres host French and foreign researchers who work together to study the ecology and genomics of forests. Due to its history and its geographical position, the INRA centre in Nancy has always been largely devoted to the study of the forest and its products (of which timber is the most important). Five hundred people study subjects from the genome to the territory, including the functioning of trees and of ecosystems, as well as the forestry economy and the production of biomass.

For these specialists of timber in France, the scheme had to be exemplary from an environmental viewpoint, with a clearly-visible “all wood” character, in order to make the building’s form consistent with its function.

Its curved south facade encompasses the site’s entire entrance and appears like a series of strips of timber on a landscape background. The smooth north side is a response to the other buildings which date from the 1960s. These two dynamic elements of the scheme are linked by an atrium, which is the real heart of the scheme.

Behind its light appearance, this building hides the high technical standards required by its brief. The architects and the client worked together in mutually-beneficial symbiosis to optimise its performance and to involve the entire local timber industry in a highly relevant way.

The atrium, between a nerve centre and an indoor garden

The atrium is the scheme’s nerve centre. It is like the inside of a “bee-hive” that thrives on the mutual visibility between the various activities. It is a place for interaction, discussion, sharing and encounters, for exhibitions of work. This image transforms our perception of research. It connects the two buildings in a pleasant atmosphere characterised by the interplay of stairs, catwalks and transparent views.

To stress the unique character of this space, the landscapers of the Itinéraire Bis firm designed an exotic garden with a different, surprising nature that is tropicalised, abundant and colourful.

All the circulation areas, stairs and lifts are immersed in this indoor landscape.

The atrium is generously lit, watered with recovered rainwater. It features an attractive pool, and it is planted directly into the ground. Plants are organised in three strata: herbaceous plants on the ground, shrubs and bushes up to human height, and large column-shaped trees that go up through the floor levels.

“The principle was that the plantations illustrate all the strata of the tropical rain forest, both linked to the subject of some of the Institute’s researchers and in response to the temperature and humidity conditions in the atrium. Each stratum is characterised by a representative plant (ground cover plant: creeping dwarf fig-tree, shrub: bird of paradise; climbing plant / liana or vine: star jasmine; epiphyte plant: candelabra aloes; tree: jaggery palm [Caryota urens]; aquatic plant: giant horsetail).”

For the experts of our local forests, it is an unusual exotic wooded habitat, compatible with heat that is maintained constant all year.

Thanks to the atrium, the two north and south strips – which are occupied by spaces of low depth – have double aspects, with the known advantages in terms of views, ventilation and daylighting. The large dished membrane of ETFE plastic that covers it provides uniform, diffuse controlled natural light, producing an artificial sky effect.

The accommodation is separated into two sides. The north side of the scheme is a response to the existing 1960s buildings on the site, with a smooth facade, facings of bakelized panels, and horizontal strips of windows. It echoes the buildings that look onto them, to which it is linked by a timber access balcony. Most of the laboratories are on this side of the building; they benefit from stable light, with no overheating in summer, and they keep a direct visual connection with the rest of the Campus.

The south side materialises the Campus entrance. It characterizes the scheme with its double skin of wood and its curved plan. Most of the offices are on this side of the building, clearly visible on the entrance road, fitted with appropriate solar protection, and benefiting from long-distance views.

The external access balconies, protected by a timber claustra, extend the work spaces by creating a play of timber strips and of interwoven or criss-crossed horizontal and vertical strips. The access balconies act as canopies, adjusted to balance solar protection and solar gains and to protect the necessary privacy and confidentiality. The density varies according to the aspect. From East to West, the texture of the outer “skin” densifies and creates a dynamic effect on the facade.

The guard rails in stainless steel grid and the metal grating floors bring lightness and transparency to this outer skin, creating numerous weaving effects. It is a suspended, independent structure in order to avoid heat bridges, constructed according to the principle of using one single timber cross-section (4 cm x 12 cm) throughout, in order to maintain a very fine appearance.

Outside a technical area on the ground floor of the north building, the entire scheme is in timber structure, which is a first time for a complex of laboratories with such high technical requirements (regarding temperature, pollution, vibrations, etc.).

Timber is used everywhere (for facades, floors and internal partition walls). Above and beyond arguments in favour of eco-construction, which Tectoniques promotes in all its projects, it echoes the subject of research conducted in these laboratories (into forest genomics).

The chosen construction scheme consists in using solid timber elements with small spans and closely spaced on a 1.20 m x 6 m construction grid. It is a scheme that uses a lot of local timber selected from the adjacent forest which is converted or processed very little.

The dry construction, the use of short-span structural grids, the size and means of assembly of the prefabricated “macro-components”, and a plan that is easy to extend are all measures that ensure the future adaptability of this laboratory building, including in the short term. The floor spaces are freed of any structures, and they can be partitioned and modified as desired according to needs.

Considering this very visible construction system, one can say that this project is very representative of the work of the Tectoniques firm. One may draw a parallel, for example, with the Espace Nordique for the Biathlon in Bessans (in the Savoie area of the French Alps).

Experimenting with timber from a short production-marketing-distribution channel

This scheme highlights and promotes the qualities of wood: 250 m3 of silver fir and Dou­glas fir were used for this project, only in the form of solid timber. It is an illustration of the potential of the region’s forest and timber industry to meet very specific demand. The timber used for structural purposes was obtained from forests of the Vosges mountains, in which the trees were chosen while standing for their dimensional and mechanical characteristics. The timber was sawn just a few kilometres from the construction site and it supplied according to a standard contract put in place in recent years by the ONF (National Forests Office).

This promotes Vosges fir, while even the large and very large softwoods which characterise the forests of the Vosges mountain range pose problems of outlets. Seasoned and planed C24 classified structural timber (with CE marking) of the Sélection Vosges brand, was used. It was decided to use back-sawn (tangentially cut) timber, which required special know-how that is specific to sawmills of the Lorraine region. The Bas­tien sawmill in Romoneix carried out the operation using logs from the State forest of Ormont-Robache forest and from the Défilé de Straiture ravine. Close cooperation was established between ONF and the sawmill: all wood used for the INRA building is completely traceable. 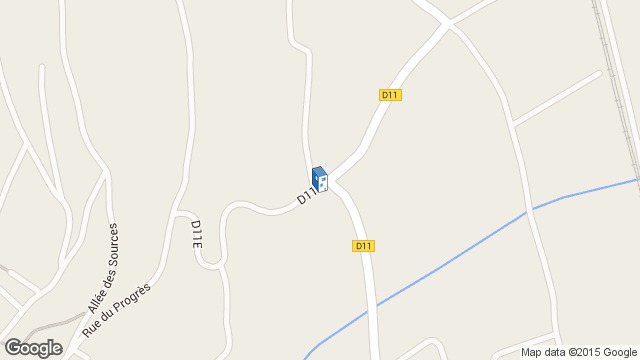