Save
US Census Bureau Headquarters / SOM 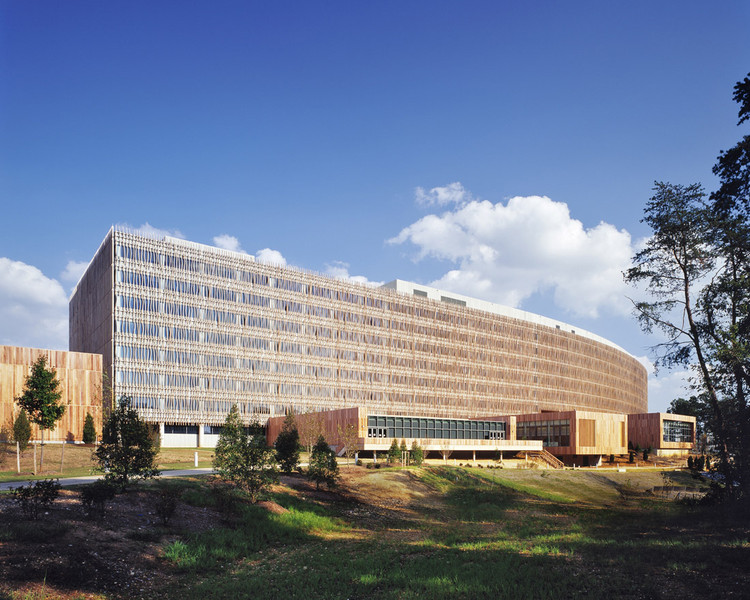 Situated on 80 wooded acres of the Suitland Federal Center near downtown Washington, D.C., the new 2.5-million-square-foot headquarters for the U.S. Census Bureau houses all the Bureau’s 6,000 employees. The Bureau’s previous workplace model was a 1930s ideal with offices arranged along long corridors – a model so highly codified for government workplaces that entire building typologies (finger buildings, etc) were created to accommodate the idea. SOM’s goal in designing this new headquarters for Census was to bring the very best and latest thinking on architecture and the corporate workplace from the business world and apply it to a government agency.

To minimize this necessarily large building’s presence in its natural setting, the design team limited the office program to eight stories of height and used a variety of other architectural and sustainable-design strategies to reduce the real and perceived impact on the site. In the end, the large corporate campus explores an architectural expression that celebrates and heightens its relationship to the landscape.

Given the size of the building and the need to update the Bureau’s organizational system, SOM had to develop a series of innovative techniques for the architecture, space planning and way finding. Also included in the program is an assortment of amenities, such as medical facilities, library, an auditorium, dining area, a credit union, and a gymnasium.

Due to the shear size of the project and the sensitivity of the site, a unique, holistic architectural language was developed. Sustainability was interpreted in formal as well as mechanical terms. Two separate buildings grow from one single mass, cleaved apart to create a central garden that integrates the building with its landscape, while maintaining one cohesive vision.

By eroding the mass, and developing materials to camouflage the edges of the enclosure, SOM developed a concept that breaks down the enormous scale of this building, makes it permeable and blurs the boundaries between building and landscape. The curved office buildings have two enclosures. The outside edges that face the woods are covered in a brise soleil of laminated, wooden pieces that create dappled patterns of shadow and warm light inside the offices, suggesting a forest interior. Their size and frequency is determined by the scale of the human body; occupants can view the exterior clearly while being shielded from the sun. The FSC-certified wood – marine-grade, white oak – is harvested according to sustainable guidelines.

Underlying this "wood veil" is a system of green tinted precast spandrels and glazed vision panels that match the cast of the landscape. The inside edges that face the courtyard are bare and fully glazed to maximize daylight. A finely fritted veil of curving lines echoes the wooden sunshades.

The façade of the building that faces the central courtyard has large windows strategically placed at intervals which protrude from or are recessed into the building. Clad in Brazilian Ipe, these windows indicate the location of support nodes, containing office-related spaces such as lounges, conference meeting areas, etc. – program elements that support the work areas. Sunlight and views to the landscaped courtyard penetrate the building at these locations.

The adjacent parking garages are sheathed in a green, wire armature for ivy. When fully grown, this "ivy veil" will comprise a 'skin' of leaves that filter light, increase oxygen content within the garages, and allow for natural ventilation.

To achieve a silver rating from LEED, the designers incorporated many other sustainable techniques, including water reclamation, recycled building materials, minimal energy consumption and natural daylighting into the design. In addition to these prescribed sustainability measures, the building's shape, massing, and cladding create a new language for sustainable architecture.

With its wood-clad offices and ivy-draped parking structures, the Census Bureau blurs the distinction between the building and landscape by camouflaging both the structures and their scales.

The interiors team worked very closely with the architectural team to create one fluid space, despite the fact that the structures are divided both in plan and in terms of phasing. First, the client’s program requirements were analyzed to develop criteria for the interior architecture and base-building design. At a macro level, the anticipated sizes for user groups determined the logical break points in the massing between the two buildings. At the floor scale, a scheme was developed to determine the lease span depth and the location of support areas, as well as a concept for the shared nodes, located in the window boxes. Other criteria developed during this analysis include ceiling heights, loading requirements, long-span construction and environmental criteria. As the base building design developed, the interiors group rigorously tested each proposed scenario for compliance with the established standards.

Not only did the building need to comply with the area requirements, it had to be carefully planned to provide a functional and efficient workplace for the Bureau’s employees. After researching international best practices in office spaces, the interior team selected an open office plan that brings in optimum natural light – a fairly major change for a government agency. Throughout the entire building, open workspaces with low partitions surround the perimeter to allow for natural light exposure and easy communication. Offices with glass fronts and internal support rooms are located in the core, easily accessible to each work group.

For maximum flexibility, the work areas can be organized either horizontally or vertically. However, most directorates are organized in a series of two story units, each with similar components, but adaptable to the mission-specific requirements of each directorate. The units are connected vertically by an internal stairway linked to support nodes. These nodes provide pantries, lounges, copy centers and gathering spaces, where employees can have chance meetings with their colleagues.

Lastly, the team developed and employed three major unifying and wayfinding concepts: the Street, the Boxes and the Color Spectrum. The Street is the main passageway to access the amenities, such as the café, the fitness center, the auditorium, etc. – in effect making it the public highway through the campus. Special attention was paid to drawing the maximum amount of natural light into this underground area - by providing views of the outside through portals. Reiterating the subterranean level of the Street, it is lined with a tectonic rockwall, which hides service stations and activates this public space, and is illuminated by spectrum lighting from one end to the other. . The amenities off the Street are housed in individual Boxes, branching off the core of the building and engaging the surrounding landscape.

The Color Spectrum is the final element that pulls the campus together. Based on the Bureau’s desire to incorporate nature into the building, the color scheme was designed to resonate from natural hues and sun lighting into vibrant, energetic colors. Color tones in the areas near the curtain wall are calm and natural, since the exterior acts as a natural way finding mechanism. However, when one travels towards the core of the building, the support nodes and the Street, bright, vibrant colors are used as a graphic, spatial tool. Further, the color schemes differ both horizontally and vertically. As one passes from one end of the building to the other, the color spectrum is revealed horizontally. In addition, as one passes from the ground floor to the top floor, the patterns in elevator corridors become darker and increasingly prominent. 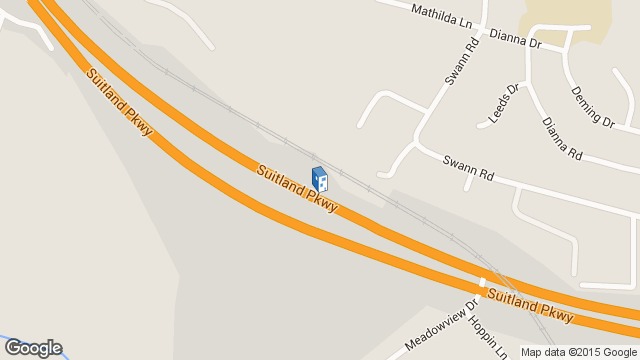