nARCHITECTS is designing a cultural education complex for the Wyckoff House Museum in Brooklyn on the site of New York's oldest house. The Wyckoff House has an immense history as it was the first landmark designated by the Landmarks Preservation Commission in 1968. nARCHITECTS’s educational complex will act as a portal between its present day environment and historical site. Due to its exceptional spatial and temporal intervention, the design was recently awarded an AIA New York Design Merit Award.

Read more about the award-winning design after the break...

Planning for the Wyckoff House Museum began in 2011, after nARCHITECTS was commissioned to design a new cultural education building and landscape for the site as part of the New York City Department of Parks & Recreation's Design Excellence Program.

The design provides access to public programs and administration as well as a variety of outdoor activities and spaces. As history is key in the design of the program, the museum will convey the Dutch experience in Brooklyn and its roots in the founding of America.

The building’s exterior is covered in a dark zinc cladding, which contrasts the bright-colored interior of orange glazed terracotta panels. This specially-chosen orange color is a direct reference to a china cabinet inside the Wyckoff House. Instead of incorporating gutters or downspouts, the building uses its galvalume roof as an efficient rain collector. Rainwater is channeled down into an exterior “rain chase,” an invention that simplifies maintenance and also provides a spectacle for visitors, delivering the roof runoff to a bioswale and detention tanks underground.

The landscape design is a collaboration between nARCHITECTS and Nancy Owens Studio. This design not only provides a direct view of the house, but also allows the experience to unfold from different angles along an indirect path. Native and historical plantings are incorporated into a simple, sparse landscape. Many additional features have been designed to heighten the overall experience of the small one-acre site.

The Wyckoff House is expected to break ground in late 2013 and is on track to receive a LEED Silver rating at minimum. 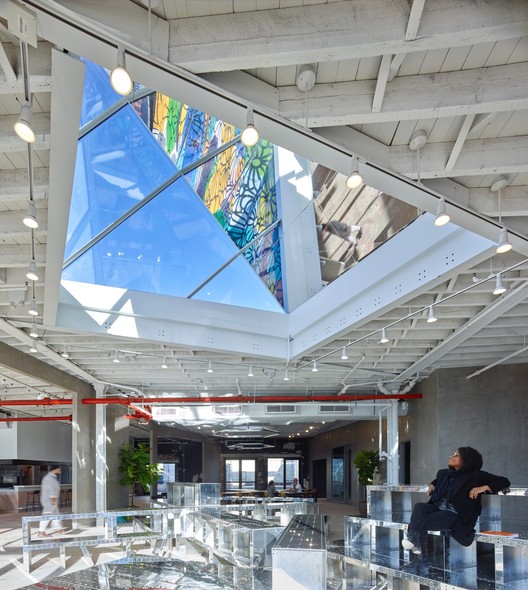