With everything today changing and the fishing architecture gone, the village of Sancti Petri owes its importance to the past tuna industry and seafarers. This first prize winning proposal in the competition for the urban and architectural design of the Península of Sancti-Petri aims to give back the original meaning to the peninsula by reinterpreting architectural and spatial values ​​of the past. Designed by BAKPAK Architects, this "new town" is divided into 13 themed compact-use sets, and each of them are made up of modules. More images and architects' description after the break.

The beauty of the peninsula (also known in the region as “the boat”) lies in the simplicity and compactness of functional and economic architecture. This project takes that tradition and introduces new elements that adapt to the new reality of uses. The industrial architecture, pitched roofs, sequences of gables…has inspired this new architecture. This type of architecture was based on growth by adding very basic modules in terms of typology so that we can generate blocks with certain complexity. This view of planning as the sum of individual parts is the theoretical and conceptual basis of our proposal.

These square shaped sets are related in one hand to the environment through its open perimeter, and in other hand with itself through its "streets and squares" in the interior. These sets has a strong relationship to the sea, the natural park and the new forest, showing a scale close to a village with a complex tissue and sheltered from the wind east and west.

Outward we can find their white facades, more opaque, with square holes…in other words, a one familiar landscape. Inward the facades are built with pine wood boards, generating a certain historical relation with the tradition of the wooden boats and its carpenters. As a connecting element between all the parts, but also as the new value of the peninsula, we introduce a new "forest" of replantes pines (Pinus pinea) form south to north, creating a new reality landscape.

Due to its shape, the module (78 square meters) combined with itself generate naves (occasionally interrupted by yards) in the same proportion as the ancient town. To build it we will use a metallic structure. This concept of repetitive modules has some benefit in serialized construction so the cost of implementation will be significantly lower than any conventional construction. 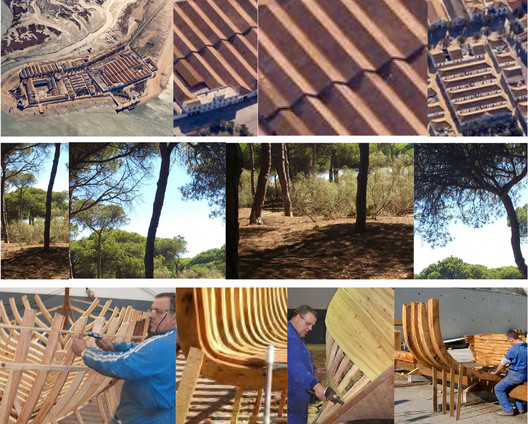