Designed by the collaborative team composed of Harry C. Bougadellis & Associate Architects, Georges Batzios, and Martha Schwartz Partners, their proposal for the Re-Think Athens competition, which was named as the 2nd runner up, is an urban landscape element which will characterize the entire center of Athens. Titled 'Belvederes of Athens ', their design concept creates a high velocity urban corridor void of anchors or rest by structuring the street space into a series of terraces, expressive belvederes define individual urban spaces along this perpetual slope. More images and architects' description after the break.

The City of Athens’ historic triangle is delimited on its northern edge by Panepistimiou Street. A continuous 2% downward slope along the street’s 1km stretch between Syntagma and Omonoia Squares serves the city’s most beautiful buildings such as the National Academy of Athens and the National Library which define the history of the capital.

Designed to be one of the most important urban axes in the beginning of the 19th century, Panepistimiou was transformed into one of the busiest vehicular traffic axes of the city, a situation that remains today. Vehicular traffic dominates the Panepistimiou experience for all who use it. Motorists are enclosed in a tense vehicular corridor, the dense traffic and fast speeds disabling them from a visual experience of the surrounding landscape.  Pedestrians are submerged in the subsequent emissions and noise, unable to truly experience the street’s beautiful buildings and sights.

Athenians recognize the value of Panepistimiou Street but ultimately avoid it as they are isolated from existing public spaces like the Trilogy, Justice Square and Omonoia Square.  The city’s automobile-centric urban strategy creates this disconnect, and results in Panepistimiou lacking the urban anchors, equipment and sufficient vegetation necessary for pedestrian attraction.

The linear form of Panepistimiou Street and its continuous downward slope towards Omonoia Square create a high velocity urban corridor void of anchors or rest. The terraced spaces slow down the spectator and encourage him to interact with the city, its buildings and functions. Each terrace strengthens a connection to this portion of the city, reminding locals of its significance while introducing visitors to beautiful new spaces, teaching them that Athens it more than just the Acropolis.

Terraced belvederes following the street’s slope will organize it into specific zones corresponding with adjacent buildings, streets and neighborhoods and define usable areas for leisure, play, entertainment, cultural activities and markets. Program element ideas are derived from adjacent vertical street names which represent Greek history, with design elements complimenting specific program. The belvederes occupy the center of the street with specific edge treatment and heights depending on their length and program. The adjacent hardscape on either side retains the street’s original downward slope for pedestrian paths, tram lines, bicycle lanes and service vehicles.

The belvedere is topography, infrastructure, platform and sculpture at the same time.  Constructed of Greek white marble, their sculptural quality reflects the tradition of ancient Greek architecture, its monolithic stonework and the stylobate of the Greek temples.

These platforms also play a crucial role in establishing an extensive storm water harvesting system throughout the biggest part of the intervention area. They integrate water tanks which collect filtered run-off to be used for irrigation, a catalyst for a sustainable urban forest strategy in Athens. 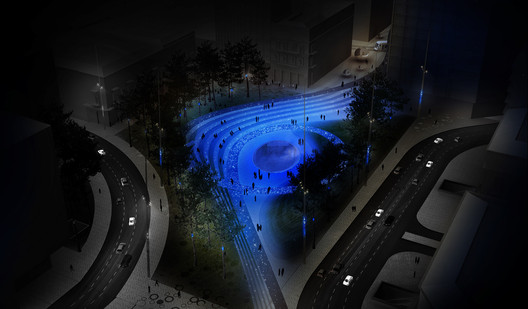 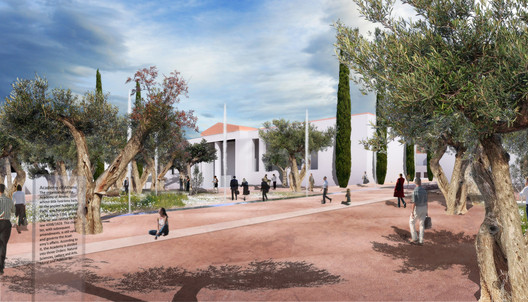 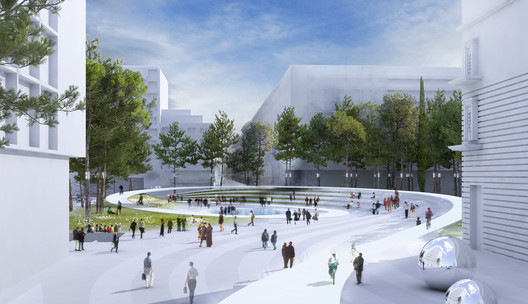