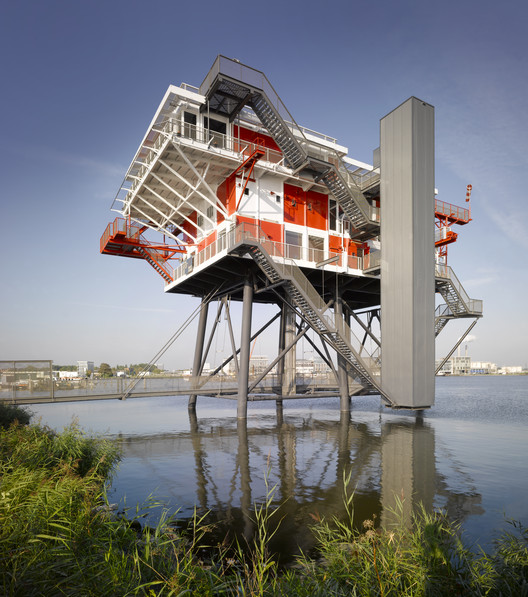 The program consists of an office function on the first deck and a restaurant on deck two and three, an extra story has been created spreading the restaurant over two floors. At 25 meters height, a large public terrace is situated on the roof with a fantastic 360-degree view. The distinctive red and white-checkered building rests on 12-meter high columns and has been placed 15 meters of shore. A steel footbridge leads up to the building, first running beneath the island and then guiding you through the enormous steel construction. The walkway splits into one part that leads to the elevator while the other leads to the staircase winding its way up along the northeast side of the building with connections to each deck and the roof terrace. Walking around the island the viewer is treated to a great view on every terrace.

The red and white-checkered pattern of the building is continued in the new floor externally. The red parts of the façade are closed (solid) while the white parts are filled with large glass windows. Characteristic existing details and components have been preserved and reused. Long external footbridges, large signal lights and the lifeboat have been placed back on the island. The new added story will be placed on the former helicopter-platform designed on the same grid as the existing structure. Large parts of the facade and columns are welded on site to form a subtle transition between old and new. Staircases, landings and research-platforms are mostly reused and made accessible, to ensure the island retains its original atmosphere.

All original fences have been renovated and railings have been customized to meet current standards. Deck 1 has a bypass making it possible to walk around the entire deck. The office function on this floor has large glass panels, which create a bright room with wide views over the river IJ, the Houthavens and the city. Deck 2, located at the southwest end of the building, provides a sun terrace that by large steel pivoting doors in white façade parts is connected to the bar inside. The kitchen and entrance of the restaurant are also situated on deck 2.

A wide staircase leads guests through a void from deck 2 to deck 3 where the helipad used to be located. This deck is surrounded by large glass sliding doors and a bypass around the helipad which also can be used as a terrace. The 140 square meters roofterrace is reachable by the main staircase. The reward for the 22 meters climb is an unexpected view that stretches over the entire center of Amsterdam.

History
The construction of the REM-island (pirate broadcasting company) started in 1964. The island was located 9 kilometers off the coast at Noordwijk just outside territorial waters in order to avoid Dutch legislation. In the summer of that year the island provided the first commercial radio and tv broadcast. Constructed completely from steel, the REM-island was seen as a prototype for building oil platforms at sea.The island housed a radio tower of 80 meters high resting on 6 columns and stood 10 meters above sea level.

Nearly four months after the first broadcast the Dutch government adopted the anti-REM law and a raid by federal police shortly followed. The government took all the equipment and broke down the tower. A group of broadcast pioneers united and established the TROS (a well-known Dutch television channel). After the raid the government took over the island and began to use it as a test-post for National Water Development. The REM-island was dismantled and brought to shore in 2006. 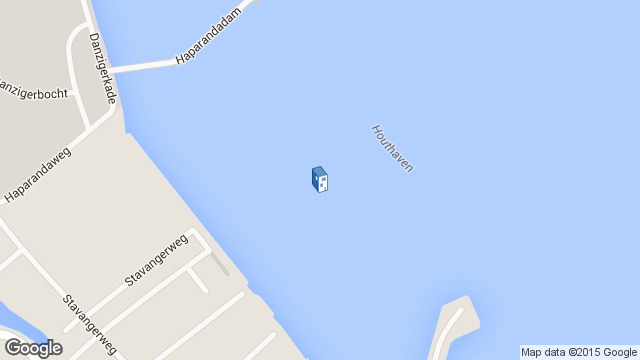 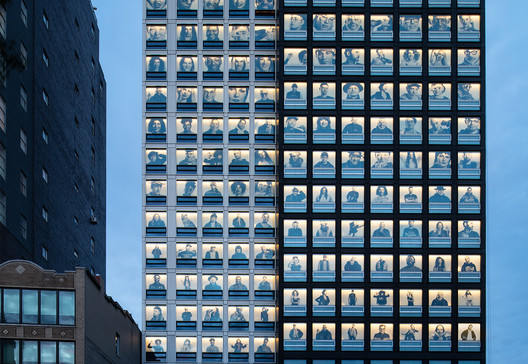