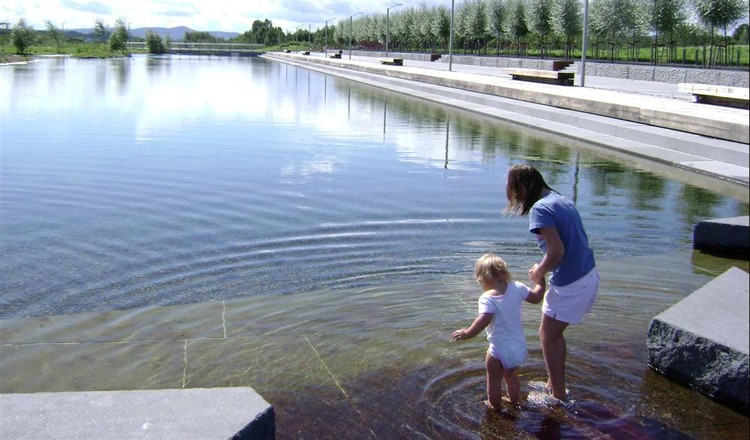 Text description provided by the architects. An old cultivated landscape with much variation and beauty was levelled into Oslo’s international airport in the 1940 - 60’s. In 1998, the airport moved out and left behind a depressing wasteland. After 10 years a new environment has been created, with visual references to the old natural forms of its landscape history, and in a visual dialogue with the more recent machinelike linearity of the airport runways. The Nansen Park, opened in 2008, now awaits 6000 new housing units and work spaces for 15000 people along its perimeter.

The old Oslo International Airport at Fornebu left a peninsula of almost 1000 acres to be transformed. This has resulted in the largest project for industrial reclamation in the country. It was decided that a new park should form a functional focus and identifying centrepiece of a new community some 10 kilometres from downtown Oslo. Plots for housing and offices were sold off to private developers, while Statsbygg (the Norwegian Directorate of Public Construction and Property) and the City of Oslo undertook responsibility for infrastructure and landscape: The treatment of polluted grounds, the building of roads and technical infrastructure, as well as the planning of new landscape forms and the building of a new park structure. This included the establishment of new recreational areas, buffer zones along areas for nature preservation, a network of pedestrian walks, in addition to the unifying central Nansen Park itself.

Finnish architects Helin and Siitonen won a city planning competition in 1998, forming the planning premises for the whole peninsula: A ring road establishing the perimeter for a mildly bowl-shaped landscape with a centrally located park and seven green arms reaching out towards the sea in all directions. An architectural competition in 2004 was won by landscape architects Bjørbekk & Lindheim. In the planning phases, we have cooperated with the engineering firm Norconsult and the German firm, Atelier Dreiseitl, for water design and water treatment. In 2008, the park was named after Fridtjof Nansen, polar explorer, scientist, humanitarian, diplomat and Nobel laureate, who lived nearby.

Fornebu was a beautiful and well-kept cultural landscape before the last extensive airport expansion some 60 years ago. A richly varied natural setting was eradicated; hillocks were blasted away, hollows were evened, bays and inlets filled, the shoreline altered. Small remnants of the original landscape were left as fragments along the outer perimeters of the airstrips. In order to respond to this dramatic history, the park has been designed as a dynamic dialogue between the uncompromising linearity of the airport and the softer, more organic lines of the original landscape.

The central Nansen Park of approximately 200.000 sq.meters has been designed to serve as an attractive and active meeting place for all those who will live at and use the new Fornebu. It is bordered by the Oslo Fjord on three sides. The openness of the landscape, as well as the distant contours of the hills to the north and west of the city, gives a strong and peaceful sense of the sky, a separateness and spaciousness which we have also tried to instil in the new landscape. We have attempted to combine the quiet calm of the extensive views and the harmonious forms with multiple options for activities and physical exercise. We have wanted to give the park a strong identity, while at the same time giving it simplicity and timelessness.

The old airport control tower and the former terminal building to the north is the important starting point for the new park. We have placed the Tower Square here in order to mark the tower as an important entry. From here, a waterway stretches from north to south through the entire park. The design of the waterway itself also reflects the playful variations between straight and organic forms, still reflecting pool surfaces and streaming or falling water. It starts with a narrow water channel running over rippling coloured glass within a frame of corten steel. From here, the water runs down a 1,5 meter wide water channel made of concrete, cast in situ, with edges and small bridges also in corten steel. The water is then led into a larger basin with a precise, hard side and a softer, green organic side with thresholds and rapids of 40-50 cm before it empties into the large Central Lake of 6000 sq.meters. Surplus water is led through a overflow into a infiltration area before ending in the fjord. Most of the water is cleaned and pumped back up into the Tower Square. The Nansen Park will be the recipient of surface water from the adjacent housing areas and roads. Open green swales have been built in order to carry the water down towards the new Central Lake. Biological sand filters, mechanical filters and pumps cleans and airs the water sufficiently to ensure good water quality.

The Festival Plaza and the Strip have been located to the northwest of the Central Pool, with a clear reference to the former runway. The Strip has been formed through the layering of various materials that have a reference to the characteristic geology from Cambrium Silur time at Fornebu. Wide steps in granite lead down to the lake and invite to close contact with the water. Next to it, there is a wide platform in Kebony/ Wisorwood and a narrow strip of riverbed pebbles, and next to it an area of in situ polished concrete with green runway strip lighting. A seating edge of roughly hewn granite manages the change of levels and frames an area of gravel with a double row of silver willows, leading onto the grass of outer parts of the park.

The plaza has been given a generous multipurpose floor of large cut paving of granite, measuring up to 2,4 x 1,6 meters. Towards the south, the floor slopes evenly down into the lake. This area has been given an artistic treatment, with large slabs of stone, appearing perhaps like ice rafts, and water nozzles which at intervals let water run over the sloping plane. Moveable steel elements invite children to manipulate the water streams and determine the route of the water.

A large amphitheatre invites different kinds of performances, and can also be used as a quiet place for seating. A café, opening up to the Festival Plaza through large glass walls and doors, has been planned in front of the purification- and pump house. Facing this on the other side of the pool, we have taken care of the remnants of one of the original characteristic small Fornebu hills from cambrium silur time (?). In this area, the terrain waves back and forth in gentle curve, contrasting with the straight lines of the Strip. On this and on other remnants of hills, we have tried to restore the original vegetation of the area, typically sparse for the islands of the inner Oslo Fjord.

The seven green arms, width varying from 30 to 100 meters, will enable people to move around in the green areas in all directions at Fornebu. Different sites for activities and rest have been placed in these arms; places for volleyball, play-areas made with rubber surfaces, large climbing nets, elements in wood for sitting/running/rolling, small reminiscences of an earlier airport regime…

A strong ecological profile forms the foundation of the whole transformational process. Polluted grounds have been cleaned, asphalt and concrete have been retrieved and reused, new soil for cultivation was made from masses from the site, with the addition of composted sewer sludge. Large volumes of earth and rock have been moved within the Fornebu area in order to transform the flat airport area into a landscape with different spatial qualities and heights to give views over the sea. There is a clear intention that all park maintenance will be carried out according to ecological principles.

The park is ready for use. It is unusual in Norway that major public spaces like this have been completed ahead of the major building construction program. We are eager to see if the property market will allow the adjacent building sites to be filled with the activities, so that the park will be taken into the care of new inhabitants and park users. 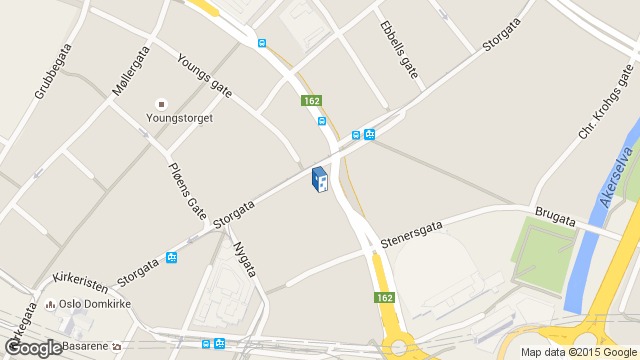 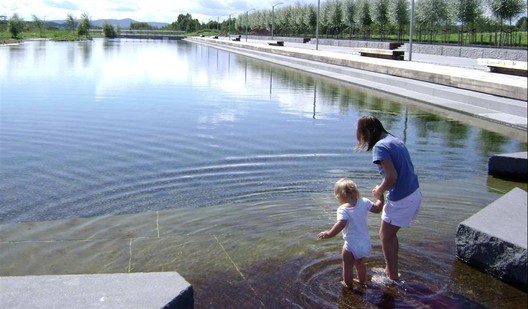