Text description provided by the architects. In April 2009, the central Italian city of L’Aquila was devastated by a crippling earthquake, claiming lives and causing extensive damage to thousands of buildings, including the leveling of the city’s main auditorium venue. Nearing the four anniversary of this tragic disaster, the Italian city of Trento has donated a Renzo Piano-designed auditorium, which was inaugurated in October, in an effort to aid the reconstruction of the medieval city.

Creating an illusion of instability, the auditorium is formed by three interconnected cubes made entirely of wood (1.165 cubic meters in total) that ironically appears as they had “haphazardly tumbled down” and came to rest upon each other. The entire structure was prefabricated and then assembled onsite by Log Engineering, who pieced it together with 800,000 nails, 100,000 screws and 10,000 brackets. 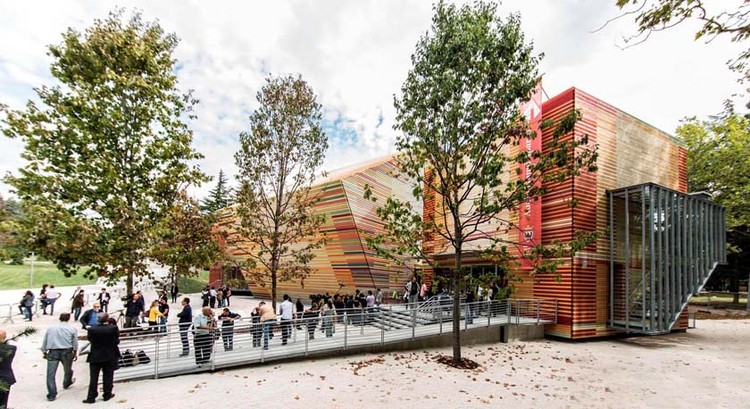 Although the wooden cubes provide a striking contrast to the neighboring, 16th-century Castle of L’Aquila, the material was chosen to optimize the building’s acoustic function. Using larch from Val di Fiemme in Trento, which is highly-valued and famously known for being used by Cremona's 17th-century master lute-makers, Stradivarius being the most famous, the building is intended to preform like a musical instrument.

The 2,500 square meter structure features a central volume, which houses the 238-seat auditorium, and two service volumes: a public service area with a foyer and a performance service area with dressing rooms and additional support space. Each is clad in multicolored and specially treated larch tiles, measuring around 25 centimeters wide and four centimeters thick. The 16 sides of the cubes that can be seen - two corresponding to the bases supporting the two service buildings - are not all equal but vary depending on various, alternating architectonic criteria that give the structure a light, lively, and vibrant look. For example, a glass encased staircase punctures through the wooden facade of the foyer as it leads to a second story, while an opaque surface on the south side and roof softens natural light to illuminate a transition space between the auditorium and foyer.

The foyer's volume is equipped with a refreshment area, public restrooms, cloakroom and ticket desk on the first floor, while the air-conditioning system's technical rooms are located on the second floor and the power plant with direct access from outside stairs on the underground floor. The public takes a naturally lit, elevated walkway, rising around one meter above ground, to reach the auditorium from the foyer.

The 238-seat auditorium has a stage that can hold around 40 musicians. It’s slopped, cubic facade supports two stepped seating areas facing each other to accommodate the audience; the larger has 190 seats in front of the orchestra, the smaller, 48 seats behind it. The seats' angle ensures the best possible listening and viewing conditions. The walls' raw wood surfaces are hung with a series of acoustic panels orientated towards the audience to reflect sound inside the auditorium. The panels, also made of wood but with a high-quality finish, ‘soar’ in space, in some cases superimposed on the vertical walls, but always remaining detached from them, in other cases floating in space, hanging from above. Two approximately two-meter-high acoustic walls flanking the stage reflect sound towards the orchestra, ensuring the best possible listening conditions.

The musicians' dressing rooms are on the side opposite the foyer and give access to the autonomous, independent room. This access, which crosses an elevated, glazed walkway similar to the one in the foyer, being directly connected with the exterior, is for the musical instruments, including large pieces such as pianos, harps, percussion instruments, etc.

A ‘green area’ where the artists will be able to rest and meet one another is planned on the dressing-room volume's ground floor; two small spaces intended for the house manager and control booth are also planned. The conductor's and lead artists' dressing rooms, equipped with bath and a small waiting area outside, are located on the first floor. The orchestra musicians' dressing room and lavatories are on the second floor. The dressing room is modular: it can be subdivided into variously-sized spaces for men and women depending on the number of each in the guest orchestras.

The service volumes' various floors are interconnected by lifts whose size allows various kinds of users to take them. Access for means for the transport of instruments, for the provision of catering services and for the facilities' maintenance cross the outdoor area in front of the auditorium.

In addition, the buildings sit on a well suited piazza that is designed to extend the auditorium’s functions outdoors in the summer. The area facing the auditorium's volume can be fitted with seating to accommodate around 500 people for open-air performances or view concert activities on a big screen projecting from the facade. This area is laid out along axes springing from the sides of the Auditorium's three volumes, which intersect, generating patterns of dimensions and geometry.

It is worth noting that more than 90 newly planted trees were included to replenish the timber used to construct the cubes.