Designed by Archithinks, the competition proposal for the Piraeus Underwater Antiquities Museum and Cultural Coastal Center aims to display the spectacular and dramatic industrial beauty of the Silo through unwrapping its building skin and exposing its unique structural anatomy. The boldness of the container will be visually and formally integrated into the new project to create an icon of the future culture coast. More images and architects’ description after the break.

SILO has finished playing its role as a cereal stock house in the history. It is no more a closed container. The new project is not only a demonstration of industrial heritage, but also a reinterpretation of the sacred colonnade from Ancient Greece. Through this transformation, it will bring a sense of life and freshness to the ancient city of Piraeus. Such an innovational concept can be demonstrated in the following aspects:

The construction method is fairly minimal, it could even be defined as  a “reductive process”. A big amount of existing structure is kept and reinforced; the retrofitting is almost a continuation on the exiting modular cell system.  It creates a new framing system that is composed by the existing modular cells and cruciform structure formed by intersecting walls. The proposed structural strategy well reduces project budget, as well as keeping the construction environmentally friendly. The enormous semi-enclosed container structure creates a ventilation chimney system, which reduces heat on building’s outer surface. At the same time, its system enables the museum’s interior to be flexible on both size and functionality, that makes it a sustainably adaptable architecture in both present and future.

Aesthetically, the unwrapped internal surface was cladded by smooth exposed concrete, forming agood contrast of materiality with the existing rough and decaying building façade, it makes the internal space more dynamic experientially. In addition, there are two huge staircases running right behind the structural skin, crossing and overlapping with the highly complex structural frame structure, a sense of movement is therefore created on the building façade. Furthermore, a system of three-storey-high cruciform colonnade with eight meters depth is used as a buffer zone against the strong daylight going into exhibition rooms. The diffuse reflectance brings soft and smooth natural day light to the internal spaces, sacred and poetic, just like a Greek Temple in the ancient times.

Even though there is a flow of passengers coming from north, the entrance is still at south, remains unchanged from the existing building. It reflects the experience of touring Acropolis, which requires tourists to walk around the entire mountain to reach the interior. Our journey shall start from a splendid seven storey high staircase, it is continuous throughout the entire building, sending passengers to the 35 meter-high top floor space. During the journey, we will pass through the gigantic colonnade converted from the original storey cells. They are tall, dense, long and narrow; displaying a dance show of light and shadow to passengers, make them feel like being in a Temple of gods. On the top floor, a great panorama of the whole Piraeus can be viewed, here we will reveal the first scheme of the museum:” Thematic Axis 1: Sea, environment, man. We also keep all the top openings for crane work in the storage house with additional glazing. This will fill up visitors’ minds with imagination toward the next destination: “The under water world”.

Then, they will walk down from the next staircase, like diving into the sea of an unknown mystery. They will enjoy a series of fantastic exhibitions about marine archeology on their way down. After the staircase, the last exhibition: “the Piraeus Silo cereal show” is reached. The ground floor still keeps most of the significant facilities for Grain storage and transportation, passengers will be able to access to the knowledge very easily through witnessing all the items back in time. Of course, spatially, this is another magical experience. In summary, the building is rich and unique from a section; it has a linear nature, so that we use staircases to connect all the floors and exhibition schemes logically, naturally and poetically. The circulation within the building is dynamic and flexible, sending passengers to different depths of water, brings functionality and entertainment into one.

Because of the significant value of industrial heritage, we try our best to keep properties of the original site as much as possible, so that it will contribute a unique cultural and spatial atmosphere to the city. Also, due to respect and preservation toward the port, the sense of industry will be a key identity of the future Cultural Coast. Through surrounding and accumulating, we want to embrace the concept of “co-exist” instead of a total re-construction. We introduce the concept of “net” to redefine the existing site. The new layer will be based on the old ground; the net will be generated from the existing boundaries, buildings and other facilities. It will preserve the heritage while optimizing the commercial and functional needs of the future Cultural Coast. The new system will eventually generate two types of spaces: netting space and cell spaces.

Net space integrates into functionality of individual buildings on the site,  it also creates new areas on its own. Its circular roads connect the city and the coastline naturally; it also divides north and south through a section line from east to west. It emphasizes the boundary, improving the unity, as well as maximizing people’s accessibility within the area according to increasing their connection to its surrounding circumstances, the ocean and the city. The netting space is formed by a number of intersecting linear spaces; it creates a linear ecological and cultural space for the city. At the same time,  the net also bring together the coast , the monorail and the city three dimensionally.  Such a connection is designed not only for a transportation purpose, but also is a spontaneously generated “linear park” itself. It introduces the idea of hiking trail into parks in the city; nature and functional pathways co-exist to provide a pleasant and entertaining experience rather than only a circulation line. When passengers walk in the flowing spaces, the transition of spaces will not be felt due to there are hardly boundaries.

They will purely enjoy the environment of industrial aesthetics continuously.  In term of materiality, the net’s floor is made of porous metal board. It will preserve the existing foundation by being elevated on the ground. They formally and visually correspond to the industrial heritage and port, which redefine the idea of industrial aesthetics and emphasis the uniqueness of the park.  We can experience the history through these boards; they are lively intermediate between past and present by not destroying or hiding it. The voids underneath the boards are efficient for improving air flow, which significantly reduces temperature on the ground. The size and shape of holes will also vary according to different needs of functionality in different places. After all, they are very comfortable to walk, run or bike on.

If we define the linear spaces as flexible, flowing, natural and experiential, then cell spaces will provide schematic functionality. They will renovate the building according to both the original buildings’ function and the new needs. Culture Coast will provide 16 cell spaces, four of them are internal spaces, ten of them are external spaces, and the other two are shrinking spaces. These include National Museum of Underwater Antiquities, thematic park, building for exhibition, square, market, amphitheater, diving tutorial area, commercial building, courtyard and etc,

Both net and cell spaces will co-create a very active and attractive costal spaces. The design will throughout involve consideration between culture and ecology. It will be evolved into a positive, open, unique, inhabitable and sustainable costal public urbanscape. 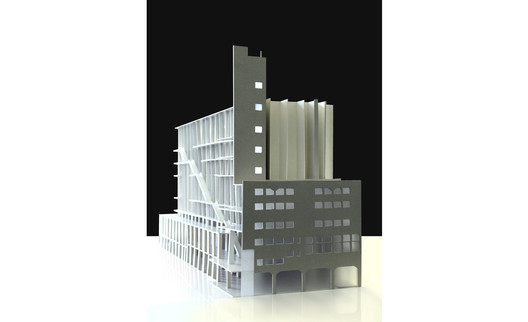