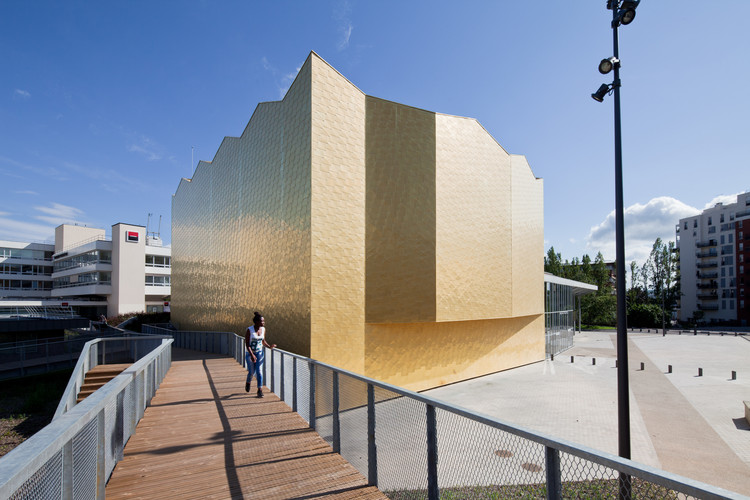 Text description provided by the architects. The challenges of the project The contractor's definition of the project is articulated around a close link between reshaping the Théâtre 95, outlining an urban morphology, and finding free spaces in the urban island. The theatre’s extension is framed by a dialectic vision of interactions between town and theatre: the theatre stretches beyond its limits while the town must find in it a porous space, a space of journeys, echoes, dreams, encounters and everyday life, devoted to contemporary modes of expression and deliberately placed at the very heart of the town.

A peculiar face-off: The Théâtre 95, opposite the prefecture, is housed in the third building to be built in the new town which arose in the 1970s. This emblem of the town’s history was once the home of Cergy Pontoise school of architecture and urban planning before becoming an arts school and then being transformed into a theatre. The extension is a complex project which is framed by more general considerations about emerging social and urban developments and cultural practices. The aim is to invite the wider public to discover new strategies to reinvent the town. The building’s pleated roof is the first component which strikes the visitor’s eye: this is the outline which the extension has borrowed to link old and new.

The connection consists in a "semi public” hall-atrium, which follows the "Fil D'Ariane" - a public footpath which winds its way without interruption from the South-East to the North-West of the town, and is thus "integrated” into the building. The existing pleated outline of the roof is continued in the hall-atrium volume, where it transforms into juxtaposed strips which create shafts of light entering the hall. The pleats are also echoed in the new auditorium, facing South, creating a new rhythm which emphasizes the choice of erecting the new structure out of line with Cergy's traditional orthogonal grid. The pleated outline has become the "crown" which is found in the volume of the new auditorium. The new volume rises in an almost baroque posture, as if in confrontation with what is already there: the existing building conserves its identity, the atrium linking it to the new, setting up a "face-off" relationship between two visions which mix, stand in opposition and join together in a boldly chaotic statement. The new extension will house a “flexible” 400 seat auditorium: the volume, which includes stage and technical areas, is blind, and covered with golden scales which bring light to a fairly colourless urban environment.

The choice of materials is based on a certain number of considerations which include questions of maintenance, longevity, environment, energy efficiency, but also appearance and style.  Copper offers a response to all these questions. A performance space is also a strong presence at the heart of a town: it is a playful space, designed for culture and leisure which, like a magic lantern, must shine and draw all eyes towards it. Thus the envelope is made up of smooth, diamond-shaped scales, made from a copper aluminium alloy lending them a golden shade which will fade very little over time, and also contributing to lighting the hall-atrium.

Within the auditorium, the space becomes more technical: Shaped as a cube to which the lighting and sound box, storage areas and dressing rooms are attached, it is equipped with retractable seating on 4 sides, making any seating layout possible, and a technical grid tailored to the dimensions of the auditorium. The audience enters via a footbridge on the first level. These technical characteristics are supplemented by details which create a welcoming and baroque atmosphere: the wooden acoustic panels are carved with motifs inspired by the orchard behind the theatre, the wrought iron balustrades hark back to theatres of old, like the iron-work of Parisian balconies, the deep purple hues declined over the walls and seating which are lightened with touches of red here and there. 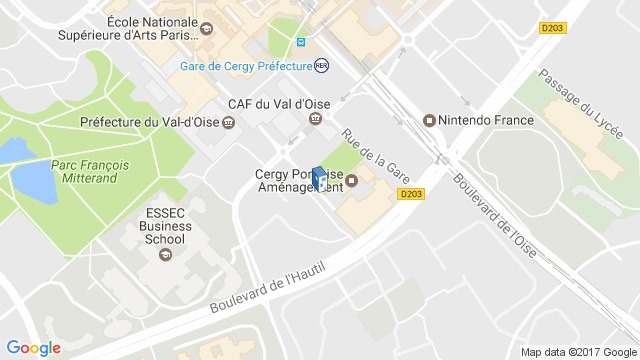