The Menil Collection Houston, designed by architect Renzo Piano, has been selected for the 2013 AIA Twenty-five Year Award. Recognizing architectural design of enduring significance, the Twenty-five Year Award is conferred on a building that has stood the test of time for 25 to 35 years as an embodiment of architectural excellence. Projects must demonstrate excellence in function, in the distinguished execution of its original program, and in the creative aspects of its statement by today’s standards. The award will be presented this June at the AIA National Convention in Denver.

More on The Menil Collection after the break.

In 1981, Dominique de Menil, president of the Menil Foundation, decided to build a museum in Houston to house one of the world’s most significant collections of primitive African art and modern surrealist art. Her main request was that all of the works could be viewed under natural lighting, and that lighting be treated in such a way so that the visitors would be aware of its continuous variations according to the time of day, the season and the local climate. She also wanted a museum that would appear “large from the inside and small from the outside”. It was to be a space that would promote a direct and relaxed relationship between the visitor and the work of art itself, thus resulting in a non-monumental and domestic environment: one that would be in complete contact with nature. In order to achieve this last objective, it was decided to position the building within the greenery of a residential district that included a number of pre-existing residences used for activities that would complement those of the museum, thus resulting in a “museums village” environment. The museum’s integration within this environment of smaller buildings was sought out by articulating lower volumes and by adorning of the exterior walls with wood, using the “balloon frame” technique.

The natural lighting of the exhibition areas gives the building its character. This decision was one that involved a significant risk: direct sunlight, in fact, would be harmful to the artworks themselves. The goal was to provide a mediated diffusion of light within the exhibition halls, without losing the sense of the external climatic conditions. For this reason, a special “solar machine” was built to evaluate the behavior of the light at the various latitudes, the mechanics of the multiple refractions, and the protection offered against the ultraviolet rays. This evaluation resulted in the definition of a basic structural element, the so-called “leaf” made out of 25 mm-thick ferrocement. Having been replicated 300 times, these leaves serve as the building’s covering platform and act as both a light filter and heat shield. These elements, which are also an integral component of the beams themselves, prevent the direct sunlight from reaching the artworks on display, while at the same time enhancing the works of art by providing natural lighting based on the weather conditions outside.

The museum is divided into two distinct areas. The exhibition halls are located on the ground floor, where nearly 200 works are exhibited around a longitudinal spine, or rather the 150 meter long “central promenade”. The upper floor, on the other hand, houses the museum’s rich collections in spaces that are particularly well-suited to the work of scholars. In the case of the Menil Museum, it was found to be impossible to exhibit the more than 10,000 pieces of the collection at the same time, and above all to ensure their proper preservation if they were to be kept constantly on display. This resulted in the creation of the “treasure house”, located on the upper floor of the museum, where the artworks are securely stored under ideal climatic conditions. The works are exhibited in rotation: those which are on display periodically return to the “treasure house” and a new series of works are brought down to the “people house”. In 1992, Dominique de Menil once again turned to Renzo Piano for the creation of a permanent exhibit dedicated to the works of one of her favorite artists, Cy Twombly. This gave rise to the Twombly Pavilion, which today can also be found within the museum village.

Story via the AIA 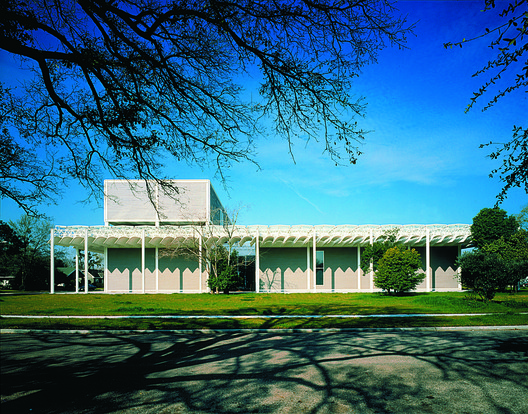