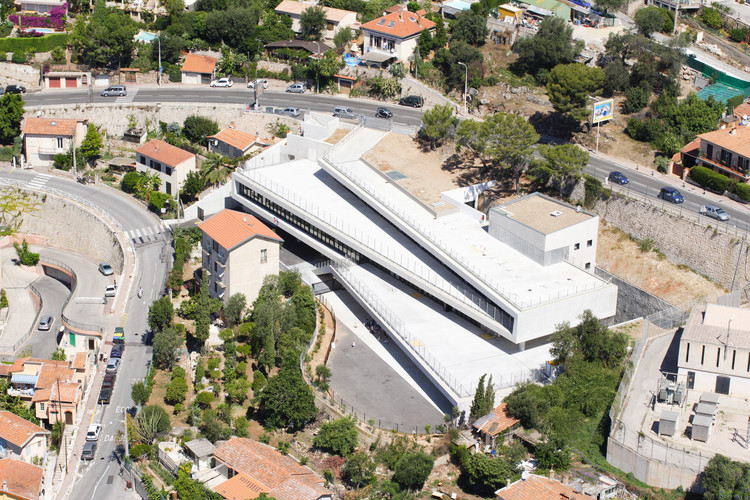 Text description provided by the architects. The parcel is situated on a sloping terrain, within a triangle formed by the junction point of two infrastructures; the 'Moyen Corniche' that links Italy to Nice and a 'Bretelle' , a local road that winds around the hillside toward Beausoleil and Monaco. To the righthand side of the plot a 15 metres drop in height seperates the two roads.

An aborted housing project allowed the town to reclaim this parcel, at the time one of the last plots available to the developers, thus allowing the construction of a public amenity of 13 classes, a community centre and a sharted canteen.

Along the 'moyenne Corniche'  a servitude  is imposed to new constructions to not surpass 10 in order to preserve the view toward the landscape . Once the recessions to the limits and alignments are respected, the maximum footprint is thus defined composing the volume available  in which to insert the project.

The initial competition program oriented the project towards a compact construction of three levels and a large shared playground. Our response was the inverse; to pile up playgrounds to obtain three superimposed ground levels. We placed an access from the top side (moyenne corniche) for the staff parking and an entry on the lower side (Brettelle) for the parents to drop off their children at a point sheltered under the fold of the construction. Three different programmes are superimposed, the kindergarten, primary school and canteen/communitycentre. The profile of the building follows the slope of the natural terrain and adheres to the view servitude. It is anchored and begins to dissapear into the topography. reclaiming  the  local tradition principal of stepped terrains, the playgrounds twist and turn. Only a vertical core is static, comprising the library, the kitchen and the wardens house, emerges from the ground like the neighbouring villas posed on their sloping parcels.  Wedged between the supporting wall and the shifting plates of the project, this core creates a negative void the space for two patios that bring natural light to the elements of the programme placed in the depths of the project and those leaning inward toward the hill.

The ensemble of the structure of the project is in reinforced concrete. The rim forming the thickness of the floor plates is bush hammered and the small tower comprising the wardens house is concrete, shattered, by a Pneumatic drill to expose the agregate.

The protection barriers are formed by 2.20 m high stainless steel netting, enclosing the playgrounds and creating a soft barrier to protect the children and stop flying footballs. The transparency of this fencing projects us literally into the landscape. The projet is imagined conceived as an infrastructure conversing with the high containing walls of the moyen corniche tempting an intimate rapport between topography and construction. 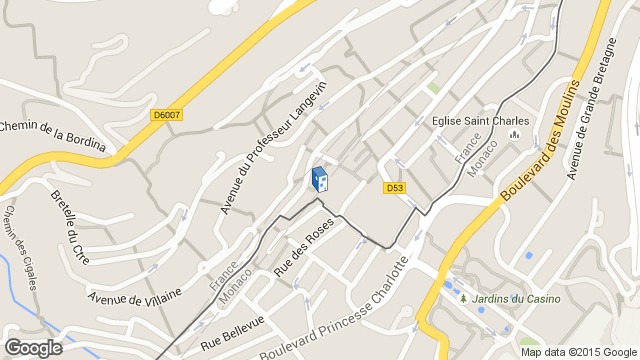