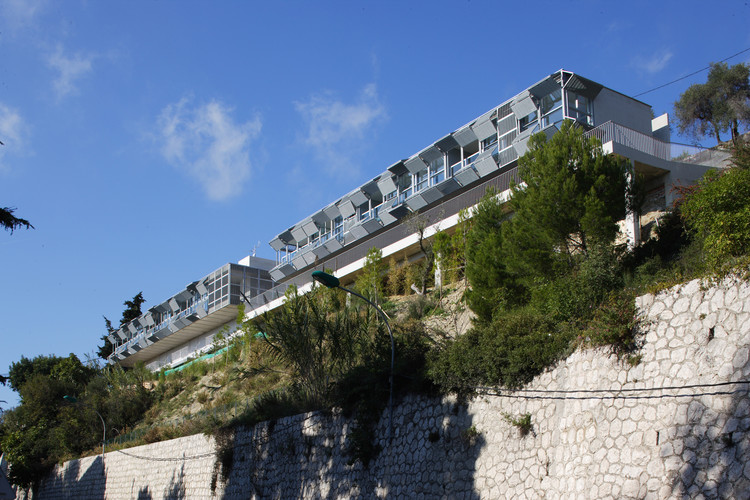 Site / Programm
The project is located in the outskirts of the village of Eze, nestled between a national bypass and a local access road The terrain is steep and supported by a large stone wall in the lower section of the plot. The site faces south and profits from 180° vistas toward the dramatic coastline, the Mediterranean and the spectacular old village of Eze. The programme (comprising a strip of six apartments, 3 two room ‘simplexes’ and 3 three room ‘duplexes’ all served by a communal open air corridor) was defined early in the initial draft to exploit fully the potential of the plot in terms of surface, typologies and parking.

Rapport With The Site
The plunging viewpoint over the site required careful attention to the roof, truly a ‘fifth façade’ and the only one visible from the road above. The surrounding landscape demanded a rapport with the building and the architecture was thus approached accordingly. The entry to the residence was designed with consideration to the horizon line and suggests an extended viewing point, prolonging the public space toward the panorama.

The plunging perception of the downhill façade heightens the powerful presence of the sight. The seemingly overhanging apartments are projected toward the void, benefiting from an atmospheric position in suspension between ‘air, terre et mer’.

Villas In A Strip
The project is composed of two units corresponding to the two programmes. The three ‘duplexes’ are anchored in the grounds to the west and the three ‘simplexes’ perch on top of the car park. The apartments are placed side by side forming a strip and are connected and served by an open air corridor, which, for the duration of an approach offers a respite from the horizontal views, instead framing the sky above or offering glimpses of the neighbouring scenery. Each residence profits from a private connection to the exterior utilising two typologies: a loggia as extension of the living room surface and a generous rooftop solarium. The steep gradient of the plot prevented the inclusion of private gardens in the programme and was compensated by the addition of these rooftop solariums, artificial terrains encased in wood.

Structure / Nature
The distinctive topography of the plot and the close proximity of the countryside create a dialogue between the project and its physical context. The downhill façade of the building seemingly floats over the steep terrain that has been left to follow its natural inclination downward.

Anchored to the ground on the western end, the building, a beam of sorts, detaches from the ground on the eastern far side. Here, accentuated by the slope of the access ramp to the parking, the volume of the building is separated from the ground, proffering a view of the truncated passageway, abruptly ended as if waiting for a future prolongation. A large wall perforated with small holes dissimulates the passageway contributing to the abstraction of the sense of domestic scale and to the notion of the ascending beam. To amplify the rapport of the object to its site the building seeks to evoke a project of infrastructure or of civil engineering. The span between the structural columns is 9 metres, releasing the ground at the level of the car park, and the panels of concrete 35cm in depth providing the leap between the structural elements. These vast spans, atypical in apartment construction redefine ones visual understanding of the building.

Structure / Usage
This principle of large spans between support columns are also applied within the ‘duplexes’ (7,00M) and the ‘simplexes’ (9,00M) and aim to offer a maximum flexibility within the housing units. The absence of internal supports columns ensure that the interior configuration can be modified at whim and without constraints. Thus personalized installations are possible and notably the living room and kitchen are entirely modifiable (open or closed kitchens, American style breakfast bars or central island styles...)

The perforated communal corridor creates an intimacy within the circulatory space, the large wall reflecting the vertical light and serving to hide domestic elements such as bathroom outlets and storerooms.

Light / Usage
This calm treatment of the uphill façade is in strong contrast with the design of the downhill façade, where the volume of the building projects forcefully into the view. The two units are clad by an armour of metal that folds and unfolds to the wishes of the inhabitants, proffering an ever-changing façade. Under this shimmering skin of metal, a floor to ceiling glazed façade is hidden and protected, comprising the entire southern façade and encompassing the loggias and bay windows. In a reprise of ‘traditional shutter’, the sections of metal grill retract and blink like eyelids allowing the landscape to penetrate the interiors. When closed, they filter the sunshine creating a diffused soft light and protecting the glazed skin. Responding to the demands of the Mediterranean climate, these pleated shutters create a diffused ambience and permit a multitude of positions. When open, the upper half of the shutter forms a sunshade and the lower half hides the view of the busy road below. Each section corresponds precisely to the size of the window frame behind and is operated independently. There are limitless possibilities for the positioning of the shutters and so this movable component proposes a playful aspect to the building, an infinite range of sun drenched interiors, filtered with various degrees depending on the degree of contraction. When the shutters are opened in entirety, the building becomes a ‘window apartment’ and the continuation of the floor to exterior space amplifies further this sentiment. The design of these moveable shutters begins with the physics of simple counterpoised elements. The weight of the rising element is counterbalanced by the descending element, consequently reducing the overall mass of the object. A simple motor, similar to those found in existing shutter applications is all that is required to power the mechanism. The modules, each composed of a simple hinged framework of lacquered steel and galvanised louvers, call upon a simple ‘low tech’ ingenuity.

On the level of the bedrooms of the duplexes, small balconies are suspended over the slope prolonging the habitation space. Protection from the sun is provided by the cantilever of the building, defined in volume by the loggias and living spaces above. To resolve the delicate problem of separation between the balconies, one single shutter opens forming a separation device between the apartments. This subtle ingenuity in addition to the continually changing metal façade above signifies effectively the occupation of the apartment and thus animates the building.

The arrival of the horizontal southern light toward the south facing windows is countered by the vertical light of the north. The northern daylight enters the building by the communal corridor, the stair shafts leading to the solariums and by the skylights that diffuse the daylight into the bedrooms and bathrooms below (duplex).

Spatial methods have been employed to alleviate the relative narrowness of the apartments. When the front door is open the landing toward the solarium appears to be connected to the living spaces, enlarging the feeling of space in the apartment and offering a greater visual depth toward the perforated exterior wall of the communal corridor. This strategy is also employed with the treatment of the external door whose double position closes either the entrance to the apartment as a whole or exclusively the stairs to the solarium signifying clearly the presence or not of the inhabitants. 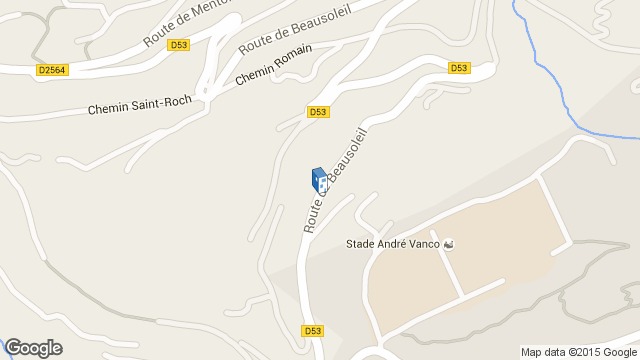 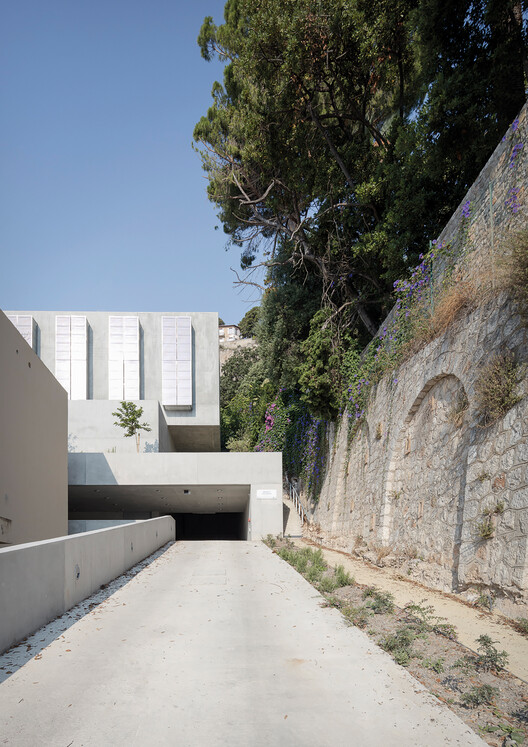 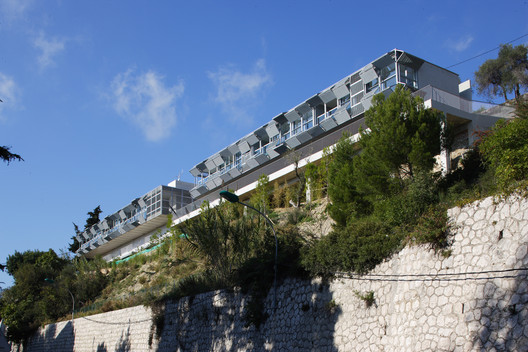