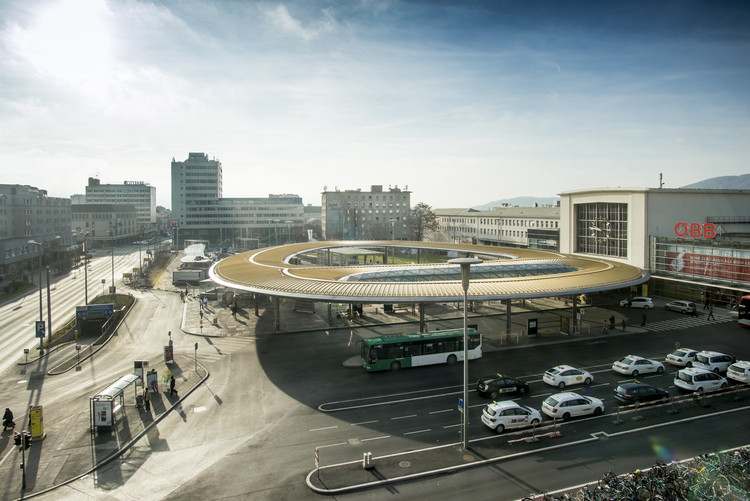 Text description provided by the architects. After two years construction, and with an investment of 90 million euros, the local transport hub at Graz Main Station is to be finished on time and within budget. The area in front of the station has been redesigned with a new projecting roof, called ‘Golden Eye’ by the locals, marking the centre of the plaza. The tram lines have seen the most modernisation, and now run underground, with all four lines directly connecting with the station. Due to the Local Transport Hub offering international connection, the station will attract around 40,000 passengers.

“The redesign of the station plaza and moving the tram lines underground allows us to offer passengers an attractive and functional local transport hub. This is a connection between East and West that is hugely important to the development of the city.” Lisa Rücker, Graz deputy mayor and coordinator of roads and traffic planning, at the opening ceremony.

The project has indeed had consequences for development all around the station site. Making the large plaza more attractive has proven to be just the first project for the area. The area's improvement has reached a second stage with the redesign of Annenstraße, where construction work is ongoing.

The New Tram Stop at the Main Station
The new double-length stop for the tram lines 1, 3, 6 and 7 is situated underground below the green space at Europlatz. The stop is open to the sky above the lines, with covered waiting areas. This allows natural light to illuminate the platforms and provides ventilation that, in the event of a fire,  is capable of clearing smoke from the station without need of additional systems. Passengers can also see the neighbouring hotel and the sky, which helps them to orientate themselves. Escalators and elevators provide disabled access at plaza level.

The wall and ceiling surfaces of the station are covered with a stripe pattern of fibre-reinforced concrete panels in three different grey tones. The angled and structured surface makes the station seem to have been ‘cut’ from the ground, with these cuts extending onto the surface of the plaza.

Redesign of the Station Plaza
The construction of the new below-ground stop offered the opportunity of adapting the heterogeneous look of the station plaza and the unsatisfactory layout of routes.

The Projecting Ring Roof, ‘Golden Eye’
The most significant element of the redesign is the covering of the plaza – an oval, ring-shaped disk that provides a ring of shelter to the station concourse and bus stops. The ring roof, called ‘Golden Eye’ by the locals, creates an ‘outer concourse’ outside the existing station concourse. Viewed from below, the roof's covering reflects a slightly distorted version of the stripes of the plaza pavement, passengers and vehicles, resembling a movie screen projection of their movements.

The primary steel construction of the approx. 3,000 m2 projecting roof is made up of articulated circular-tube supports, the spine, which connects the individual supports, and radial ribs. The total tonnage is approx. 420 tons. Prefabrication on site was used throughout construction. The limited space available at the construction site and short time window available for erecting the structure had also to be taken into consideration. The solution selected was bolting the entire structure together, without on-site welding.

Design of the Plaza
The station's stripe pattern extends over the paving of the plaza area, and shades into differently designed green zones. The polygon beds of plants, designed by landscape architects 3zu0, and a rolling lawn topography not only makes relaxing in the station plaza much more visually attractive, but also provides various recreational uses.

The improvement of bike lane access to the front of the station and creation of new covered bike storage was also part of the building project. 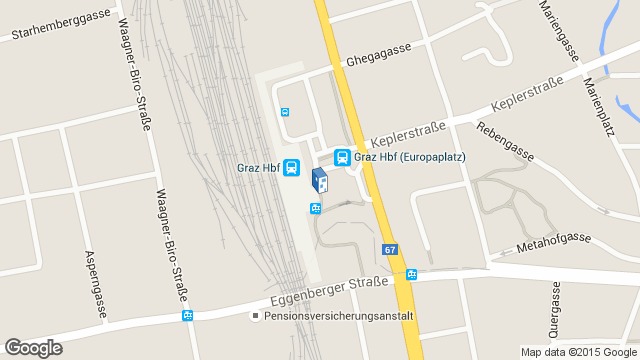