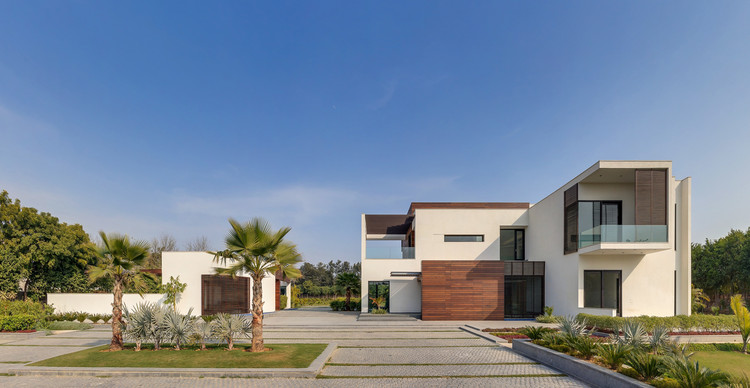 Text description provided by the architects. Designed as a lifestyle home the program was deliberately split into two units centered around a large central court. The larger of these two units holds the formal and informal areas on the lower floor with the bedrooms on the upper level. The smaller “Outhouse Unit” serves as the entertainment den along with a gymnasium, sauna, changing rooms, and service areas. The outhouse faces the central court on the South side while the North is defined by a monolithic white compound wall-as found in older tropical estates- that encloses a private garden, which could be developed into a gridded orchard over time.

The West façade facing the entry drop-off court is, has been deliberately designed as a heavy composition with minimal fenestrations so as to minimize unwanted heat gains. A narrow opening between the main building and the outhouse provides an initial glimpse into the slightly raised central court and the large lawn at the rear of the property.  The courtyard with its swimming pool and barbeque court faces the bar and living room.

The courtyard is organized around a sunken barbeque court and a swimming pool that terminates with an infinity edge along its eastern face. The formal sitting and informal family room wrap this programmed space in a “L” formation.  On the first floor, a taller cubic volume clad in seasoned hardwood, is placed along the long axis of the linear pool. A 15’ tall window seems to bring in the court and the landscape green into this bedroom.