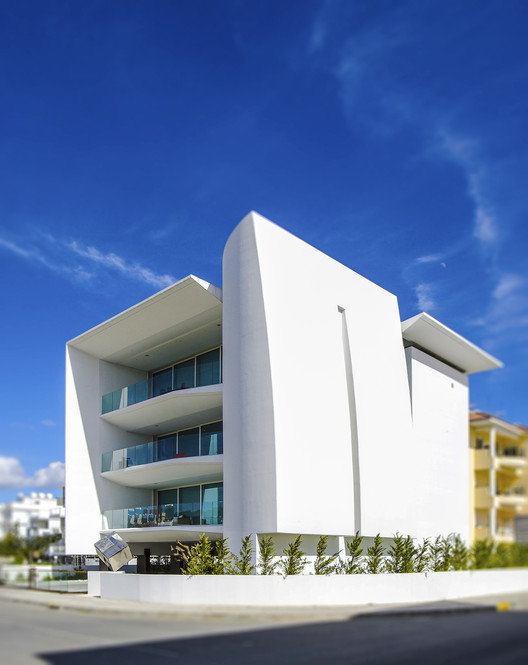 Text description provided by the architects. Situated in the urban area of Engomi in Nicosia, Cyprus, Constantinos Kalisperas  architectural studio completed project PROTON, a three storey building that consists of three spacious single floor apartments overlooking an intriguing park proposed by the Architect. The glass, steel, white concrete building with the clean organic curved lines allowing light to be the primary focus, is a surprise in it self! The building rises above ground interconnecting the surrounding topography within the proposed boundaries, unifying and repositioning the buildings essence within the broader urban fabric and the proposed park across and through the building.

The projection of internal space above and across the park connects private and public, erasing the transitional boundaries that define the programmatic use of each sector of the building. A spacious area is generated by opening the external sliding glazed doors, unifying the terrace and living area, allowing colors of the exterior to interact within the apartment.  By “opening” the façade, the internal programmatic qualities are revealed to the outside, reversing the process and allowing the city to look in.

Internally the edges that define ceiling, floors and walls, dissolve into the “pure white”, were the material palette of the house is reduced to emphasize the lightness of the rooms.  Local material such as wood and bronze is carefully used to soften and reveal specific programmatic uses within the white space.

On the south west of the building the impressive curved volume that accommodates the staircase and part of the interior is carefully designed to integrate natural light into specific areas throughout.  The organic white concrete staircase with a sculpture-like form becomes the “spine” of the building and instigates a vertical relationship between the internal horizontal levels.

On the east side, the small openings act like a collective “camera”, framing views and actions of the surroundings were the inhabitant becomes the observer. Light is used as a tool that re-animates the morphological and programmatic qualities of the building. The glass panels of the east facade were the bedrooms are situated are carefully placed combining clarity and obscurity were needed, protecting the interior from the outside “noise” but allowing at the same time maximum light into the rooms.

On the ground floor level sculptures designed by artist Nicos Kouroussis interact with water elements in order to soften the sharp edges providing a flowing effect both programmatically and spatially.  On the south side, below ground level, screened from the vehicular noise, is the pool area providing unity and interaction between the occupants. The “pure white” becomes an invisible canvas inviting for creation, transcending the building’s essence, from a typical to an “extra-ordinary” piece of art. 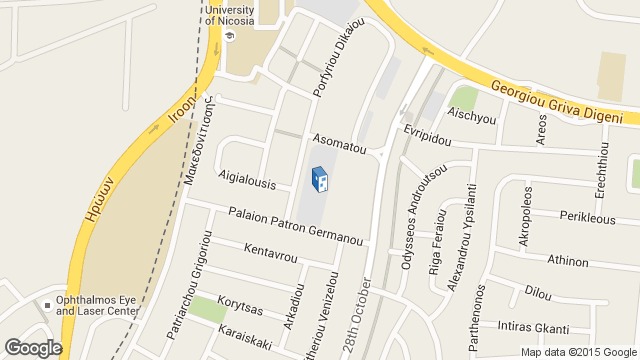