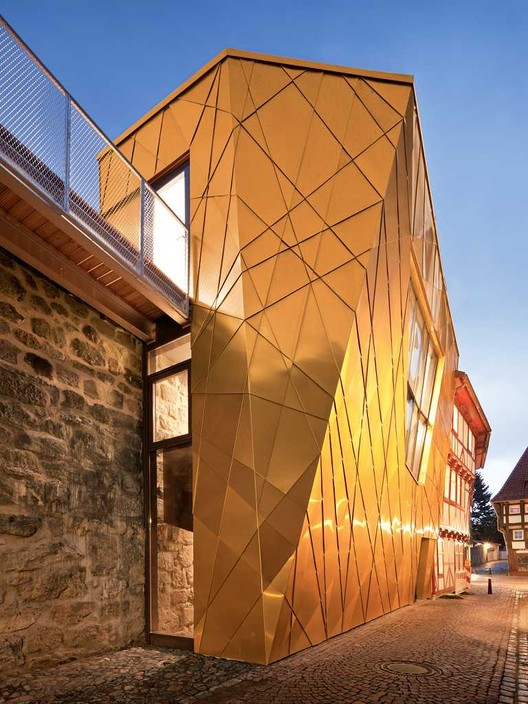 Text description provided by the architects. Berlin, Duderstadt, which is situated in the neighborhood of Göttingen, ranks among the 10 most important half-timbered towns in Germany. Besides the historical town hall, one of the most striking landmarks is the medieval “Westerturm”, with its distinctive twisted spire, integrated in the oldest sections of the city fortifications. In 2009 it was decided, to undertake the renovation of an abandoned half-timbered house next to the tower and to install a museum for historical marksmanship, thus incorporating the tower with another house on the east side of the tower, that has been flashily restored some years before.

The massive historic stonewall acts as a support for the structure on one side of the ensemble. In addition to the reestablished half-timbered structure, Gnädinger architects designed an expressive new wing made of concrete, consisting of assembled triangular folds. The addition, mainly houses the emergency staircases, as well as a gallery with a void in front of a big window. In keeping with the shape of the new building, the three story open staircases are also sculptural in design and form.

The facade is clad with golden copper metal panels of various sizes, set in a uneven pattern; this has been executed by a tinsmith, in accordance to high craftsmanship standards. The result reveals a completely foreign body, an exciting new quality, both partly rigid and partly organic among the other houses in this idyllic neighborhood. The interior design is mainly characterized by the use of a few materials: raw steel on the floor and the balustrades, black painted wood surfaces for furniture and doors imprinted with sulphur yellow texts and pictos and exposed concrete inside the new wing, contrasting with the old stone wall.

The exhibition offers three stories of different media installations and historical exhibits, giving insights to such themes as shooting, city defense and town life in the middle ages. An interactive town model of Duderstadt allows the visitors to reenact different attack scenarios. The first floor is dedicated to the archers and shooters who formed a special militia to defend the city in the middle ages. Visitors can try their hand at target shooting or the crossbow, at two virtual shooting ranges. Further audio installations are spread throughout the overall museum and give insights ito medieval city life.

A new steel bridge, a reconstructed parpet walk, makes it possible to take a walk along a part of the ancient town fortifications, it also connects the ensemble to the adjacent historic “Georgsturm”, build onto the town wall in the eighteen century. 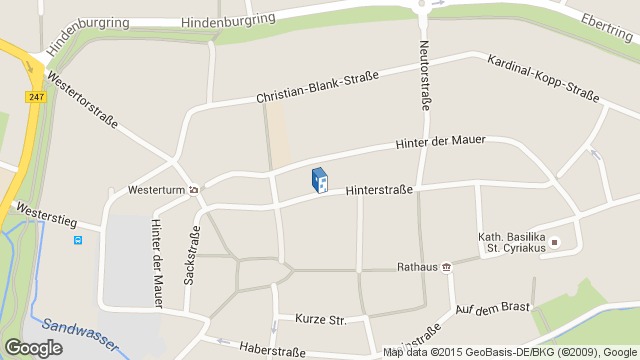