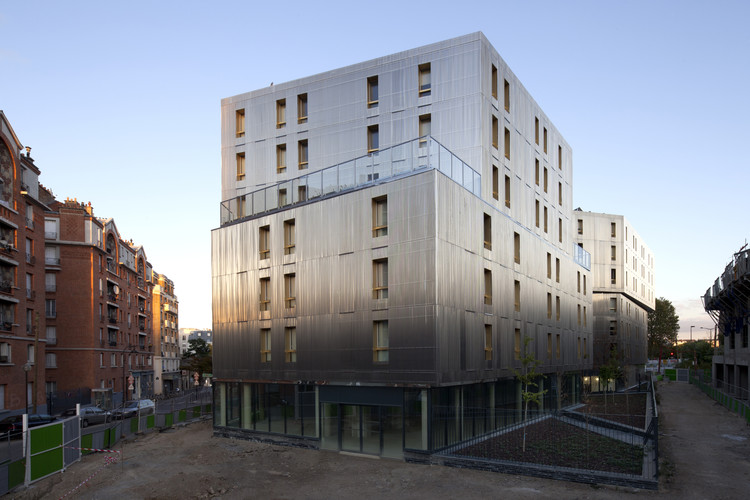 Text description provided by the architects. Architecturally speaking, the difficulty of this type of programme obviously is in the accumulation of identical cells, which one could call the ‘hive syndrome’.

Historically, the Parisian urban fabric has been characterised by its ‘ilots’, with their deep vertical interior courtyards which provided light and ventilation to the buildings. However, this solution was rejected by the building standards developed under the auspices of the hygiene movement which came in at the beginning of the twentieth century. The 12 meter «slab» with 45 degrees aspect became the archetype of twentieth century Paris.  This building seeks to update this previous model making it compatible with the techno-ecological requirements of the 21st century.

The first thought was to build a compact building not too far from the idea of the geometric simplicity of the surrounding buildings, while at the same time enriching it with an energetic constructive expression using modern materials and techniques. This decision also favoured an optimum use of the land, assuring fluid access through the streets R3 and P1 and the implantation of the built mass, which conforms to the architectural prescriptions established by the city planner Bruno Fortier. The polygonal form of the building which wraps around a central green patio, is distinguished by a «thickness» at its base onto which gives out the horizontal circulation. Its glazed facades with reflective glass allows the light to penetrate right into the heart of the building.

One of the aims of this project is to allow natural light and fresh air (in the summer) into the horizontal circulations spaces, this is thanks to the judiciously distributed openings. The vegetation planted in the suspended planters will soon fall in cascades.

The building has a horizontal «sectioning». On either side of the central «block» which constitutes the hall - a social space - the ground floor of the residence consists of two other distinct blocks : on the northern side, giving on to the square and Brillat-Savarin Street, there are two retail shops , on the southern side, another block accommodates the different technical facilities. Amongst these blocks there are parking areas for bikes.

The higher floors are placed on top of these three blocks which constitute the ground floor. They are broken down into two programmatic super-imposed «stratums»: the first three floors are dedicated to the researchers’ rooms, the three last floors are designated as student accommodation as well as housing some of the shared facilities. This splitting of the building is accentuated by a slight shift of these «drawers» between each other, by approximately sixty centimeters.  On the structural plan, this shift is eased by the floors which transfer the charges. The concrete facade is insulated by the exterior, the floors are supported by shear walls perpendicular to the facade, with a spacing of 3.60m for the three lower floors and a spacing of 5.9m for the three higher floors (a shear every two rooms).

The residence presents to the city a facade which is both smooth and deep, punctuated by the rhythm of beautiful high windows, at least two per room. The frames and openings are completely masked by an exterior golden anodized aluminum skin which accentuates the cleanliness of the perforations of the facade. The external plan, a transparent veil of corrugated stainless steel sheets interrupts the regularity of the facades giving a feeling of lightness and depth while playing with the light and colour variations of its immediate surroundings.

Extending the geometrical theme, two grooves break up the surface of the top ‘drawer’, to create two terraces for collective use. The two notches formed in the volume of the building each carry a green roof.

The decision to build a compact building optimizes efficient thermal functioning. The thick walls stock the heat the day and releases it at night. Insulation levels in the building can achieve a reduction in energy consumption corresponding to approximately 30% compared to thermal regulations. The establishment of more than 160m2 of thermal solar panels as roofing participates in the production of hot water. The collected rain water from the roofs is stocked in a tank for sanitary use or for watering the gardens.

The building is certified BBC, label H&E with a profile A, it meets the expectations of sustainability laid down in the Climate Protection Plan for the city of Paris and makes a significant contribution to the future development in this the city’s first Eco-quartier. 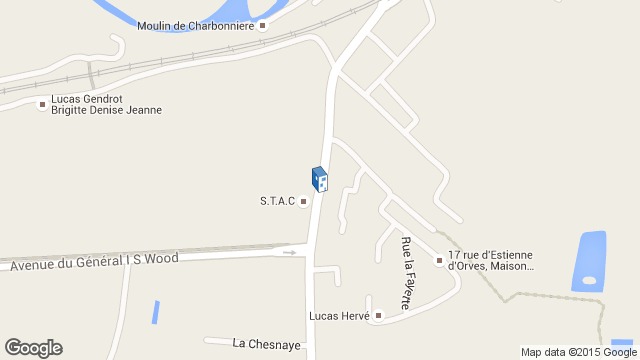